Environmental activists storm open-pit coal mine ahead of climate talks | Environment | All topics from climate change to conservation | DW | 06.11.2017

Thousands of protesters forced their way into Germany's massive Hambach strip mine in an effort to pressure politicians on the eve of a global climate summit in Bonn. The demonstration ended peacefully.

"Quick, catch up, don't leave any gaps," demonstrators yelled to one another, running through muddy fields. Although it got off to a late start, things were suddenly happening very fast at the Ende Gelände ("End of the Road") action alliance protest march on Sunday morning.

Hundreds of activists, clad in white protective overalls, ran charging toward the Hambach strip mine in North Rhine-Westphalia, past police and straight for the massive, 100-meter-tall (330-foot) coal excavator behind them. Their goal: To shut down work at Europe's largest strip mine.

Environmental activists had called for the protest on the day before the UN's COP 23 climate change summit in Bonn as a way to send a strong message to politicians to end coal mining. The Hambach strip mine is one of the EU's biggest air polluters.

According to activist Kathrin Henneberger, that's why Hambach was the perfect site for such a protest. "If we want to limit global warming to 1.5 degrees, we have to shut them down today. We don't trust the government to do it any longer. We have to do it ourselves," she told DW.

The Hambach site mines lignite, a brownish, low-grade coal which is by far the most environmentally damaging energy source on Earth. It's one of the primary reasons for Germany's failure to meet its stated climate aims. Despite efforts to move to cleaner forms of energy, one fourth of the country's power is still produced with lignite.

'Our actions are wholly legitimate'

According to Ende Gelände, some 4,500 people showed up for Sunday's protest. Police estimated the number to be around 2,500. At first, the anti-lignite activists marched toward the Hambach strip mine in one large group, splitting into two groups after a couple of kilometers. Later they split again, in a maneuver designed to evade police.

In the end, hundreds of activists stormed the mine from four different directions, with the police failing to stop them until they were almost at the coal excavators. 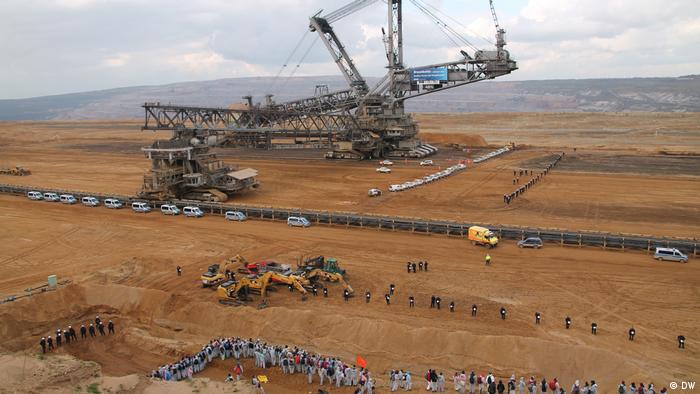 When operators from RWE Power AG shut down the excavators for safety reasons, the activists cheered. But although they were able to achieve their objective, activists said they were prepared to occupy the site until late into the night.

Police announcements via loudspeaker regularly reminded activists that their protest was illegal and that they were trespassing, and therefore committing a crime. Dorothee Häussermann, a spokeswoman for Ende Gelände, said the activists were engaged in civil disobedience.

"How can it be 'legal' for coal companies to destroy entire villages and forests only to fuel climate change with their lignite? If laws protect the destruction of natural resources needed for people to live, then we are obliged to break them — we see our actions as wholly legitimate," she said.

The protest remained mostly peaceful. But towards the end of the demonstration the police sprayed tear gas at a few activists. Ingrid Nestle, a Green member of parliament, was on hand all day as an observer to make sure that police presence was appropriate. She counted the demonstrators and the police officers, taking pictures and videos.

"The demonstrators have been consistently peaceful. They made their way down to the pit and stopped the excavator, and all without incident," she told DW. Although the police have mostly reacted appropriately, she says the use of teargas against "peaceful protesters was unnecessary." 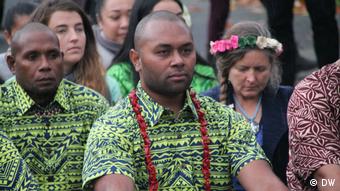 Support from the Pacific

Climate activists from the Pacific region showed solidarity with the Rhineland protesters fighting against the coal mining industry. Ahead of the protest, the Pacific Climate Warriors held a traditional ceremony in the nearly deserted village of Manheim, soon to be cleared to make way for the mine.

"We are here today to jointly demand the end of fossil fuels. In our countries right now climate change is a reality, we live in the eye of the storm, you can't go a day without seeing the decline in fish or the sea level rising or the intense change in weather," said Brianna Fruean, a 19-year-old climate activist from Samoa.

Two local women took part in the ceremony, receiving a gift of red flower petals on tapa cloth representing the beauty and resilience of Pacific culture. Antje Grothus, who lives in a village neighboring Manheim, will one day find her home on the edge of the mine.

"The ceremony was very moving, but I also found it very shameful that the Pacific Climate Warriors asked us for permission to be here, and all the while we destroy their habitat by burning coal."

The impacts of climate change are already being felt on a global scale, especially on small islands scattered around the oceans. These vulnerable island nations are planning to make their voices heard at COP 23 in Bonn. (05.11.2017)

Ahead of COP23, hundreds of anti-coal activists have defied police barriers at the Hambach coal mine in Germany — Europe's largest CO2 emitter. Protesters say climate change cannot be minimized without a coal phase out. (06.11.2017)