Former US President Barack Obama has spoken of his frustration that America is pulling out of the 2015 climate accord. In a speech in France, he stressed that US businesses, states and cities remain firmly committed. 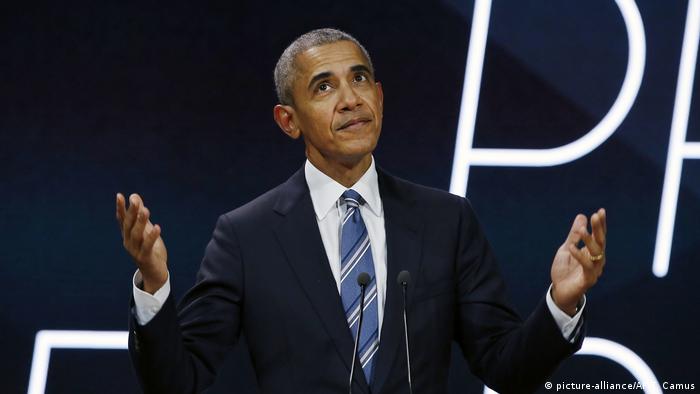 Former US President Barack Obama has made a veiled rebuke of his successor's decision to pull the United States out of the 2015 Paris climate accord.

Obama gave a speech to business leaders in the French capital on Saturday, describing what he said was the "temporary absence of American leadership on the issue."

His comments drew laughter from the audience, which was packed with French CEOs and former ministers, many of whom have slammed the decision.

US 'still on target'

Obama said despite President Donald Trump's plan to withdraw from the landmark UN agreement to limit the rise in global temperatures, the US remained on track to meet its targets. Continuing to fight climate change "makes business sense," he added.

Trump announced in June that he would cease all participation in the Paris accord, which was agreed by 195 countries and global organizations in December 2015 and seeks to reduce global carbon dioxide emissions.

The decision was met with strong criticism domestically and from other world leaders, as it partially undid several years of arduous negotiations.

COP23: How much progress was made?

Despite Trump's unwillingness to participate until the agreement is renegotiated, individual American companies — along with US states and cities — have stepped up their commitment to the deal.

During the UN climate change conference in Germany last month, some 20 US states, 110 cities and more than 1,400 businesses — which they said represented a bigger economy than any nation outside the US and China — pledged to honor the commitment made in Paris.

The earliest the US can withdraw from the Paris agreement is November 2020.

Read more: World way off track on Paris accord goals

Obama also used his Paris speech to call for more women in positions of power, saying that "men seem to be having some problems these days," in an apparent reference to the sexual assault and harassment scandals currently dominating the US.

He also warned Brussels against overreach, saying "the European Union needs to recognize that micromanaging every single aspect of life within Europe gets people frustrated."

Both French leaders have criticized Trump's decision to ditch the climate accord. However, Trump was still made guest of honor at Bastille Day celebrations in Paris in July, with Macron saying he hoped to change the American president's mind on the issue.