Authorities fired tear gas and water cannons in Paris during scuffles between police and protesters. President Emmanuel Macron's plans for a three-month public debate have done little to assuage anger. 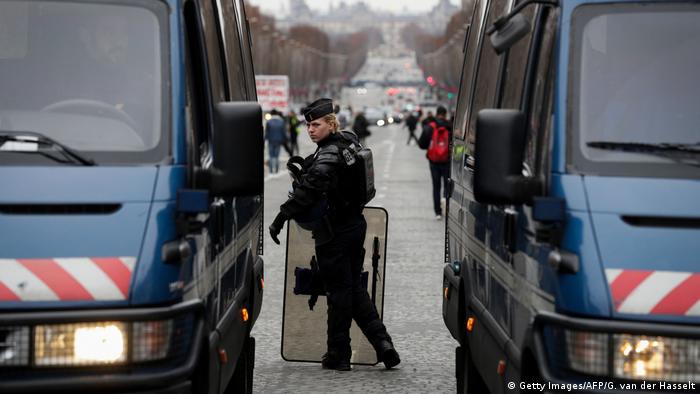 More than 5,000 police officers were deployed to the streets of the French capital on Saturday to monitor the ninth weekend of protests by the "gilets jaunes" (yellow vests) movement.

Volleys of tear gas and water cannons were used as scuffles broke out between small groups of protesters and police near the Arc de Triomphe.

Many of Paris' central districts were on lockdown in case of violence — security forces also had armored vehicles, dogs, and mounted officers stationed throughout Paris.

Dozens of banks, jewelry stores and other shops on the Champs-Elysees shopping street were boarded up for the day.

Reporter John Lichfield described those taunting and throwing stones at officers as looking like "hard-right youths rather than the provincial GJ's who made up most of the marchers earlier."

The protests in Paris took place close to where a massive gas explosion in a bakery killed two firefighters and a Spanish tourist and injured nearly 50 people earlier in the day.

Though most of Saturday's protests were peaceful, more than 115 people were arrested across France — including 74 in Paris — and almost a quarter of the national figure was detained overnight for carrying weapons. 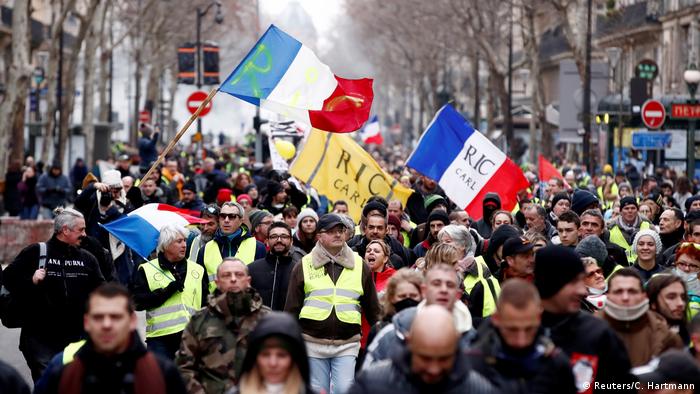 Most protests across France were peaceful

France's Interior Ministry said about 84,000 people had turned out across France to protest, 8,000 of them in Paris. That compares to 50,000 last Saturday, and more than 60,000 mobilized nationwide in mid-December. At the height of the protests, more than 150,000 people took to the streets in November.

The protests, named after the high-visibility jackets French drivers carry in their cars, have repeatedly witnessed clashes between demonstrators and police since they began in November in response to a fuel tax hike that President Emmanuel Macron has scrapped.

A small town in France

A few hundred protesters also clashed with police in the central French town of Bourges, where nearly 5,000 people gathered in defiance of a ban on public gatherings.

Bourges suddenly attracted its own protest movement after one of the yellow vest organizers told followers on Facebook the town was easy to reach and had a small police presence.

In the well-heeled horseracing town of Chantilly just north of Paris, 1,000 or so protesters marched through the center before descending on the Hippodrome, where they delayed the start of a race, local media said.

Ahead of the day's rallies, French Interior Minister Christophe Castaner warned peaceful protesters that they would be "complicit" if they attended marches that turned violent.

New laws, including a register of rioters similar to those used to control football hooligans, are being planned.

However, without central leadership or a decision-making body, protesters might not concentrate in Bourges. Last month, a protest apparently planned for Versailles was quickly relocated to central Paris. 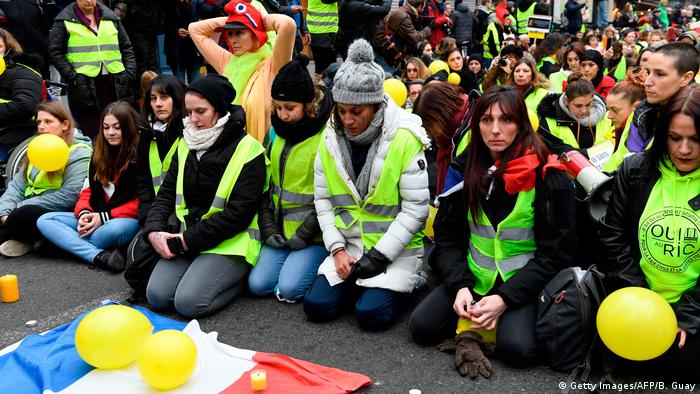 Macron's "great national debate" of town hall meetings, aimed at placating the protesters, is scheduled to start on Tuesday. Macron suggested the idea as a solution to complaints that citizens lack a say in debating and setting the political agenda.

Ecological transition, public finances, democracy, and the state's organization are intended to be the main themes of the consultations and, in a practice dating back to before the French Revolution, "grievance notebooks" have been placed in town halls for citizens to make complaints or suggestions.

But the initiative has already run into trouble after it was reported that the head of the national debates commission, Chantal Jouanno, was being paid €14,666 ($16,820) per month. She withdrew her participation, leaving the government to reorganize the discussions. 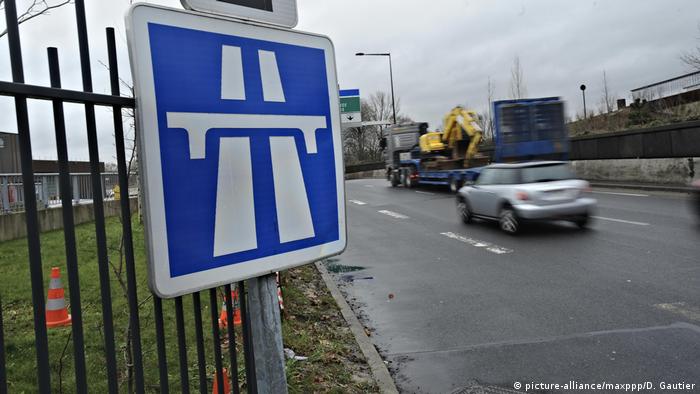 Motorway tolls in France can be too expensive for some workers

The outlook for the debates appears dim, with polling suggesting many people are uninterested in taking part in the town hall meetings or skeptical of how useful they will be.

Since November, protesters' grievances have broadened beyond the fuel tax increase to include the president's alleged elitism and the precarious living standards for many people across the country.

Fifth round of 'yellow vest' protests in France with 3,000 in Paris