Yellow vest protesters have gathered once again across France to call for tax cuts and pay increases. Some demonstrators clashed with police, with President Emmanuel Macron condemning the violence. 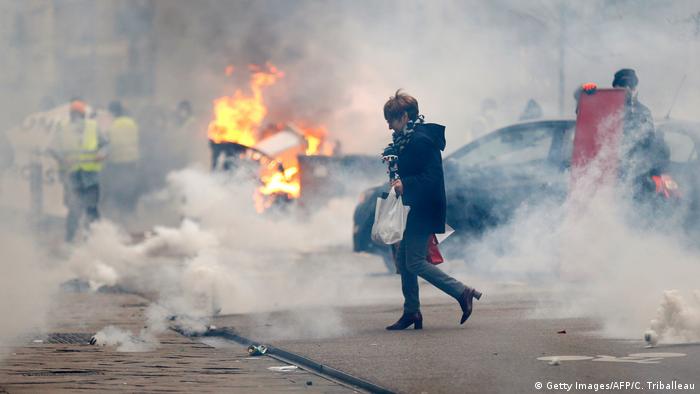 Anti-government yellow vest protesters gathered in major cities across France on Saturday for 2019's first round of demonstrations. Despite the lively atmosphere, nationwide turnout was once again lower than previous rallies in November and December, when at one point more than 125,000 marched across France. However, turnout was up compared to the sparsely attended rallies over the Christmas holiday.

In Paris, where numbers appeared to be up compared to the last weeks of December, protesters gathered at the Champs-Elysees — previously the site of major clashes with police — and marched toward the city's old stock exchange.

Some demonstrators reportedly threw projectiles at police, who in turn responded with tear gas and riot police reinforcement.

A small group attacked the office of government spokesman Benjamin Griveaux, who was forced to escape through a back door.

Griveaux said those who continue to protest were "agitators who want insurrection and, basically, to overthrow the government."

"Once again an extreme violence has attacked the Republic — its guardians, its representatives, its symbols," Macron wrote, adding: "Justice will be done."

Sweden's ambassador to France called on neighbors to help put out a small fire lit outside the Swedish Embassy during Saturday's protests.

"And where are the police??? Thanks to friendly neighbors we were able to put out the fires," Ambassador Veronika Wand-Danielsson tweeted on Saturday.

Some protesters could be heard chanting "La Marseillaise," France's national anthem, while others carried banners reading "Abolish the privileges of the elite!" and "Macron, resign!"

Many demonstrators, named after their yellow safety vests, accuse Macron of elitism and enacting policies that only benefit the wealthy.

Their numbers have fallen since Macron announced concessions in mid-December that included hiking the minimum wage and canceling a planned fuel tax increase that had sparked the first protests in November. Protesters have since put forward other demands, including more tax cuts, pay increases and a means to trigger referendums.

Since announcing the concessions, the government has stepped up its offensive against the leaderless movement. Police temporarily detained one of the movement's more prominent figures, Eric Drouet, earlier this week for allegedly organizing an illegal demonstration.