Fifth round of 'yellow vest' protests in France with 3,000 in Paris

By the end of the day, the interior ministry said there had been 66,000 protesters out on French streets, compared with 125,00 the weekend before. There were 157 arrests in the center of Paris.

Police in Paris on Saturday said they had arrested some 157 people during the "yellow vest" or "gilets jaunes" protests in opposition to President Emmanuel Macron's government. Of these, 104 had been held for questioning.

Scuffles broke out when police fired tear gas to disperse a small crowd trying to make its way through police lines near the Avenue des Champs-Elysees, a main thoroughfare in the center of the city.

Around 8,000 police have been deployed in the French capital for the fifth weekend of demonstrations against pro-business reforms and falling living standards. By late afternoon, just 400 protesters were still on the Champs-Elysees and police used water cannon to try to disperse them. The avenue later reopened to traffic. 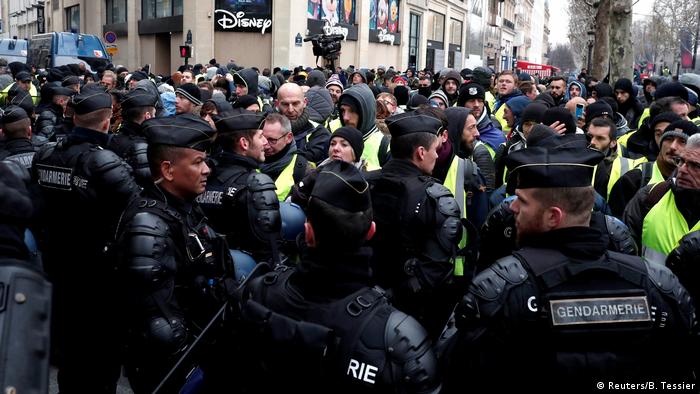 Authorities had been keen to avoid a repeat of previous demonstrations, which erupted into violence and vandalism.

DW's Helena Humphrey, reporting from Paris on Saturday, described a significant police presence, and said that news crews were having their baggage checked as well.

Police reinforced their presence Toulouse, Bordeaux and Saint-Etienne. In Toulouse, police said 850 people had protested, compared with 5,500 last weekend. In Bordeaux, there were 4,500 demonstrators, the same as last weekend.

In Marseille, a thousand people were on the streets, compared with 2,000 last Saturday.

The demonstrators who turned out had ignored Macron's calls for "calm, order and a return to normal."

An attack on a Christmas market in Strasbourg on Tuesday had increased fears of a further terror attack.

Laurent Nunez, junior interior minister, warned late on Friday that while fewer protesters were expected, security forces would likely have to tackle "individuals who are slightly more determined."

The "yellow vest" protests began more than a month ago with blockades at junctions and roundabouts across France in opposition to rising fuel taxes, but have erupted into a wider battle against rising living costs and Macron's leadership style. 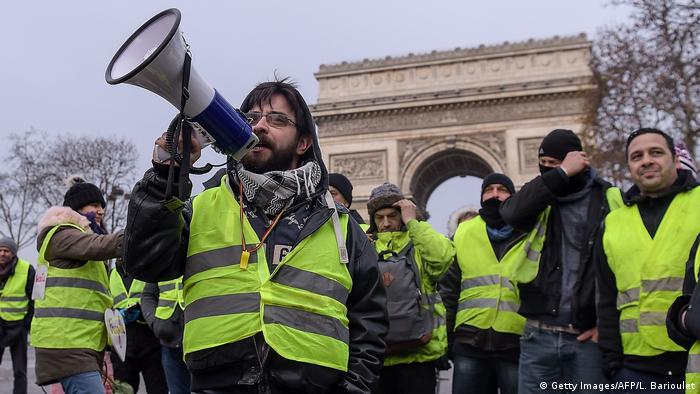 The "yellow vest" protesters are continuing to voice their demands

Facing the biggest crisis of his presidency, Macron this week announced a series of concessions, including a package of tax cuts and a hike in the minimum wage.

Public opinion, which had broadly supported the protests, appears to be turning. Two polls published on Tuesday suggest the country was split 50-50 on whether the protests should continue.

Many prominent figures in the largely leaderless movement have vowed to keep up their campaign.

France: More than 1,200 in custody after 'yellow vest' riots

President Emmanuel Macron will speak to the French people after a fourth week of protests that have shaken the country. Unrest sparked by proposed fuel tax hikes has morphed into a general anti-government revolt. (10.12.2018)