France: More than 1,200 in custody after 'yellow vest' riots

President Emmanuel Macron will speak to the French people after a fourth week of protests that have shaken the country. Unrest sparked by proposed fuel tax hikes has morphed into a general anti-government revolt.

French authorities said on Sunday they had arrested more than 1,700 people amid nationwide "yellow vest" anti-government protests the day before that caused widespread damage, particularly in the capital, Paris.

The Interior Ministry said 1,220 of those arrested had been retained in custody.

Interior Minister Christophe Castaner said 135 people were injured in the Paris protests, after demonstrators clashed with tear gas-wielding police. He estimated the number of protesters at 10,000 in Paris and 125,000 across the country.

Local media put the number of injured higher, at 264, including 39 security personnel. Some 89,000 police were deployed.

The yellow vest movement, named for the security jackets donned by the protesters, began a month ago as protests over a proposal to raise taxes on fuel, but it has since developed into an expression of general anger at high living costs and particular discontent with President Emmanuel Macron, seen by some as elitist.

The government's decision last week to abandon the fuel tax rise seems to have done little to dampen the ire of protesters, who continue to call for Macron's resignation along with a motley assortment of other demands.<div class="opinary-widget-embed" data-poll="do-you-think-president-macrons-policies-" data-customer="deutschewelleeng"></div> <script async type="text/javascript" src="//widgets.opinary.com/embed.js"></script>

The president, who has said little about the protests so far, is expected to address the nation on Monday at 8:00 p.m. CET in a bid to calm tensions.

He will first consult in the morning with national and local officials.

There were also clashes in other French cities, including Marseille, Toulouse and Bordeaux, and in neighboring Belgium. Protesters at the French border with Italy caused huge traffic jams on both sides of the frontier. 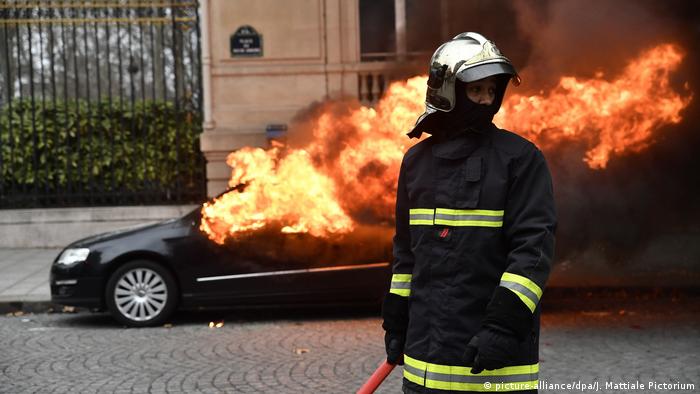 The large security presence was unable to prevent widespread damage

In Paris on Saturday, cars were set on fire and store windows smashed, causing damage that city authorities said was much greater than that during similar protests on December 1.

The protests will have a severe impact on the French economy, the country's finance minister said on Sunday.

"We must expect a new slowdown of economic growth at year-end due to the "yellow vest" protests," said Bruno Le Maire.

Cleanup operations on Sunday were complicated by fierce winds and rain that hit the capital overnight. Two major landmarks, the Eiffel Tower and the Louvre museum, reopened after being shuttered the day before amid the protests. 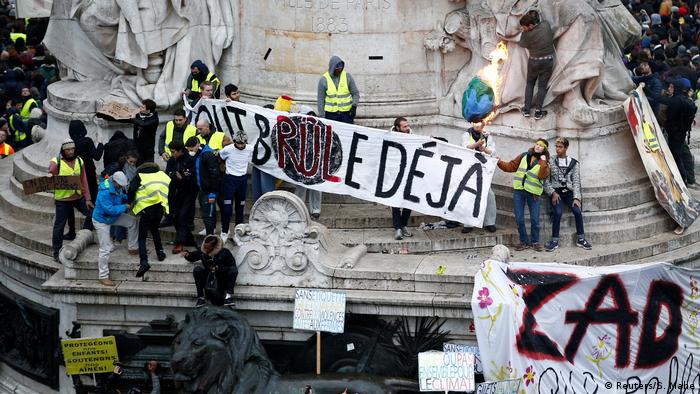 'Everything is already burning,' says this banner held by protesters at the Place de la Republique

According to news agency Agence France-Presse, French authorities are looking into US and British media reports that false social media accounts originating from Russia had sought to escalate the tensions that led to the protests.

The British Times newspaper, citing analyses by the cybersecurity company New Knowledge, said some 200 Twitter accounts had spread disinformation, using pictures of injured protesters from other events to bolster claims of brutality against French security forces, as well as other messages.

Read more: Democracy in danger: Elections are easy to manipulate