Merkel and Macron sign Treaty of Aachen to revive EU | Europe | News and current affairs from around the continent | DW | 22.01.2019

Merkel and Macron sign Treaty of Aachen to revive EU

A follow-up pact to the Elysee Treaty marks the latest gesture of friendship between France and Germany. The new bilateral pact pledges deeper cooperation between the two nations and paves the way for EU reforms.

French President Emmanuel Macron and Chancellor Angela Merkel on Tuesday signed a new friendship treaty that is designed to deepen the Franco-German friendship, bring ties to a "new level" and improve the lives of citizens in both countries.

The treaty was signed in the German city of Aachen, as France and Germany marked the 56th anniversary of the Elysee Treaty.

The idea isn't new. Paris, in particular, has regularly suggested renewing the treaty in the decades since it was first signed, despite the fact that amendments have been added over the years.

The Treaty of Aachen will be the "foundation of cooperation between our countries," said Merkel before the signing the new friendship pact.

"Seventy-four years, a single human lifetime, after the end of World War II, what seems self-evident is being called into question again," she said. "That's why, first of all, there needs to be a new commitment toward our responsibility within the European Union, a responsibility held by Germany and France."

French President Emmanuel Macron hit out at those "spreading lies" about the treaty and stressed the importance of French-German reconciliation.

"Those who forget the value of French-German reconciliation are making themselves accomplices of the crimes of the past. Those who ... spread lies are hurting the same people they are pretending to defend by seeking to repeat our history," Macron said.

However, French Prime Minister Jean-Marc Ayrault told DW TV that he would have liked to see Tuesday's accord go further.

"This is not a revolution," Ayrault said. "You could even say that it could have been more amibitious — more daring."

Given the political difficulties and the resurgence of nationalism in both countries, Ayrault said "we have a duty to be daring. You can't be ambitious without being daring. That's lacking a little. Even though I do view it as a positive step overall."

With their signatures, the governments agreed on mandatory consultations, close political cooperation and a broad-based youth exchange. Since then, more than 8.4 million young German and French citizens have taken part in exchange programs in both countries. 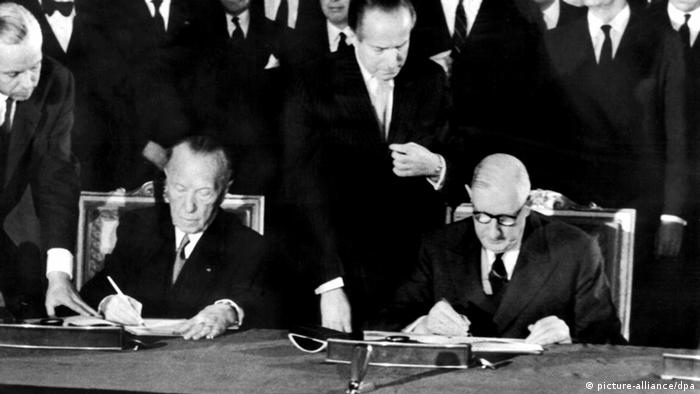 The essence of the Elysee Treaty, which merely describes a cooperation process, does not need to be changed — but this new extension is intended to send a political message, namely that Berlin and Paris want to tackle the next stage in Franco-German cooperation and prepare the ground for EU reform. At the same time, the intensified partnership is seen as a challenge to the rising populism and nationalism in Europe.

In the new joint 16-page declaration, Merkel and Macron have addressed initiatives in various policy areas. The renewed pact includes plans to extend exchange programs for citizens of both countries and intensify cooperation in European, foreign and security policies. It also pledges stronger economic integration, which includes coordinated environmental and climate policies. Refugee policies, however, have not been specifically addressed.

The German Bundestag and the French National Assembly have also passed resolutions demanding closer cooperation between both countries. This includes concrete examples that are now to be implemented, ranging from joint vocational training centers to a Franco-German center for artificial intelligence. In addition, a Franco-German parliamentary agreement is set to boost exchange between the two parliaments. Plans also include the uniform implementation of EU directives in both countries.

Focus on the economy

Germany is already France's most important economic trading partner, but now the two countries plan to move even closer together and create a Franco-German economic area, cutting back on bureaucratic hurdles.

"Together, we are better than each of us alone — not only on a joint domestic market, but also with common rules in commercial law, insolvency and company law, and with identical assessment criteria for corporation taxation," Andreas Jung, head of the Franco-German Parliamentary Group in the Bundestag, told DW.

The bid for harmonization is not new — in 2011, then-President Nicolas Sarkozy and Merkel agreed on uniform corporate taxes, but implementation was a long time coming because of the many technical pitfalls.

The renewed Elysee Treaty also focuses on Franco-German defense cooperation and the fight against terrorism — and here, the countries have already come a long way. A joint military unit, the Franco-German Brigade, was created in 1989. It has, however, lost some of its significance in recent years, and plays no major role in the countries' day-to-day military routines.

Moving from visions to concrete defense projects has always been difficult because of the nations' diverging philosophies: The French are more likely to opt for intervention, while the Germans are very reluctant on the military stage. That should improve, however, as Germany and France have pledged assistance — including military assistance — "in the event of an armed attack" on one of the two countries.

Prosperity in the 21st century is closely linked to the digital revolution, and the partner countries also want to initiate a "digital union." US giants including Apple, Google and Amazon dominate this market, but lawmakers have urged Germany and France to try to set up a Franco-German center for artificial intelligence to support European companies directly or indirectly with taxpayers' money.

However, a move in that direction has backfired in the past. Just over 10 years ago, when Google was conquering the world, Chancellor Gerhard Schröder and President Jacques Chirac kicked off the plans for a Franco-German search engine, the Quaero project. But Germany would leave the project less than a year later.

Elysee - A treaty for friendship

On January 22, 1963, Germany and France sealed their friendship with the Elysee Treaty. The relationship has seen many highs and lows, but over the last 50 years it has become the engine that drives the European Union. (22.01.2013)