With Brexit looming on the horizon and populist parties calling for further EU exits, European unity has been shaken. In a video message, Merkel explained why she thinks a new friendship treaty with Paris will help. 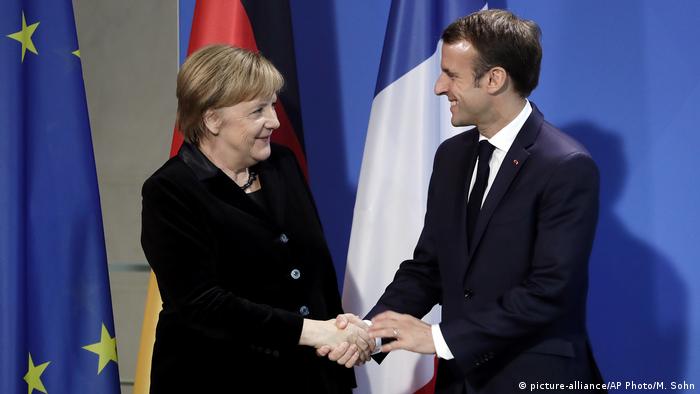 German Chancellor Angela Merkel stressed the importance and significance of German-French ties in a video message posted on Saturday.

After centuries of war between the two countries, the friendship that now exists between Berlin and Paris was "anything but self-evident," she said.

Her remarks come just days before she and French President Emmanuel Macron are due to sign a new friendship treaty in the city of Aachen.

The new agreement will build on the Elysee Treaty of 1963 that was signed between then-Chancellor Konrad Adenauer and French President Charles de Gaulle.

Although the Elysee Treaty formally sealed the friendly relations between the once-hostile countries, Merkel said a new agreement was needed "because we believe that the world has changed dramatically."

One of the main aspects that wasn't addressed in the old treaty was the role that Germany and France play in Europe.

"We work in Europe, we want to give momentum to European unity," Merkel said. "This dimension wasn't as planned out in the old treaty."

The German chancellor noted that the new Treaty of Aachen will largely entail more "cross-border cooperation" and more convergence between French and German policies in the economic sector and the labor market.

"We will supplement this contract with a list of projects that will be constantly updated to show how Germany and France continue to work together in Europe," she said.

Berlin and Paris are also close partners in foreign policy, she said, noting that France and Germany will head the United Nations Security Council for two consecutive months this spring.

Merkel and Macron will meet in Aachen to sign the treaty on January 22 — 56 years after the first friendship treaty was signed.