′Europe′s youth are more Europe-minded than the public thinks′ | Europe| News and current affairs from around the continent | DW | 21.01.2019

Many young Germans and French are proud Europeans, says Tobias Bütow, the new German head of the Franco-German Youth Office. But he believes more needs to be done to address the realities faced by Europe's youth. 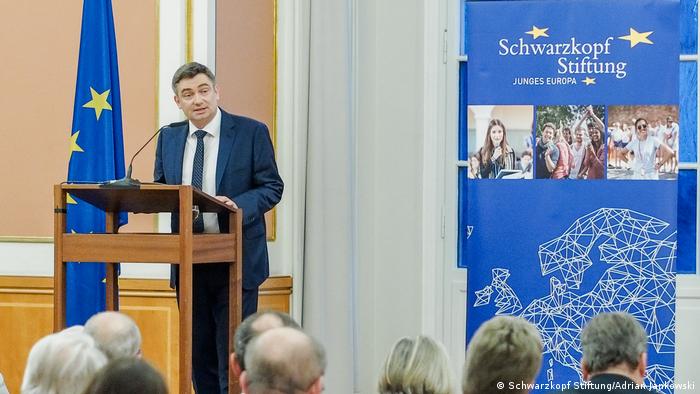 DW: On March 1, you'll take on the post of one of two heads of the Franco-German Youth Office (FGYO). It's a time of crisis for the EU — do you believe that young people in France and Germany have also lost interest in the European unity project?

Tobias Bütow: On the contrary: Europe's youth are more Europe-minded than the public likes to think. I have worked with high school and university students over the past few years, and I have met a lot of young people who are keen Europeans, passionately planning their future careers on a pro-European level. Their numbers are on the rise. Without a European vision, young people with a nationalist outlook will miss the opportunities the 21st century has to offer.

Read more: Survey: European youth give thumbs up to the EU, dissent on immigration

That's why it's so important that we reach those young people who can't benefit from Europe's advantages in their day-to -day life, due to social or financial difficulties. We should not lose sight of the fact that there are deep rifts between young people, living in both Germany and in France, with some attracted to nationalist tendencies.

I believe the politicians responsible for shaping policies in Germany and in France are well aware of the historic dimension of the current European crisis. That's why they're signing the Aachen Treaty, a renewal of the Franco-German Elysee Treaty — in effect the FGYO's founding document.

This new accord is designed to bring people in Germany and France even closer together, for instance via cooperation in society and city partnerships like those that were formed at the very beginning of Franco-German reconciliation. It's an historic step.

These days, fewer French schools offer German language classes. Does that defeat the purpose of your organization?

Don't confuse the FGYO with an education ministry, or a school. It's thanks to the FGYO that 9 million young people met and became familiar with the culture of the other country. An international organization like the FGYO should accompany the work of education ministries, school administrations, teachers and parents in order to motivate students to understand that learning a language is a key tool to set the course for their professional lives, and help them become knowledgeable Europeans.

When he took office, French President Emmanuel Macron urged Germany to do much more for European integration. It appears that chance has been wasted. Why is that?

Democracy is once again caught up in a process of self-discovery, in both Germany and France. Political decision-makers and intellectuals, but also the general public, are unable to cope with the information revolution. Our societies should generate much more self-confidence from Europe's successes. The European Union is a political miracle that developed its power in particular after the division of Europe had been overcome. From a historical point of view, what we have already achieved is unique in the world.

Since the last parliamentary election in Germany, fewer lawmakers in the Bundestag are experts on France. Will you, in your capacity as head of the Franco-German Youth Office, be part of a diminishing minority of people maintaining Germany's friendship with France?

No, I think the opposite is the case — in Germany and in France, the Franco-German friendship is steadily increasing. Today, we're seeing a special situation, where grandchildren are teaching their grandparents the language of the neighboring country. Our countries are steadily growing closer together. In the EU, that's not only the case for Germany and France. Looking at European history, I know of no other political project that worked so closely and successfully together despite all the centuries of wars and peace. I hope a common country, in the sense of a common Europe, will emerge.

Tobias Bütow, 41, is the first German from the former East Germany to head the Franco-German Youth Office . He will join Beatrice Angrand, who has been in office since 2009. The French and German governments each appoint secretaries general for a six-year term. The FGYO was founded on the basis of the 1963 Elysee Treaty, and has since organized exchange programs for German and French youth.

Angela Merkel and the future of the EU

European Union leaders fear Angela Merkel's weakened power could be a liability for the bloc. When it comes to political heavyweights in Europe, the German chancellor has long been top of the list. (13.11.2018)