Two regional youth wings of the AfD are planning to close after being placed under observation. The nationalists decried the "abuse of power" after authorities cited concerns over extremist ties. 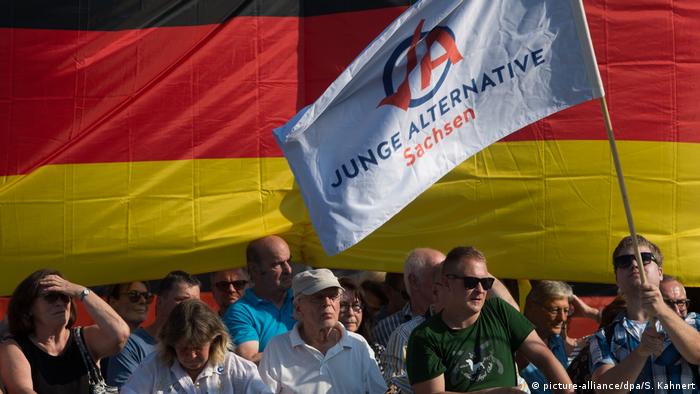 The far-right Alternative for Germany (AfD) said on Monday that its youth wings in Bremen and Lower Saxony would be disbanded after it came to light that they were under observation by the relevant regional arms of Germany's domestic intelligence service (the BfV).

Lower Saxony's Interior Minister Boris Pistorius, a Social Democrat (SPD), said he had signed the order to observe the Young Alternative ("Junge Alternative," or "JA" for short) due to credible concerns about right-wing extremism.

He said that his decision was "completely detached" from the nationalist marches that swept through the eastern city of Chemnitz last week, but rather based on "a not insignificant ideological and personal overlap," with the Identitarian movement, a far-right fringe group.

Pistorius's counterpart in Bremen, Ulrich Mäurer, said that he had already commissioned a review of the JA group in the city last year, the final draft of which had been presented to him last week.

"These people have dropped their masks several times in the recent past, parts of the messages in this group are pure racism," Mäurer said.

In Bremen, police reportedly carried out a search recently over incitement to hatred allegations against a JA member.

The revelations came at a time when other mainstream parties in Germany are calling for the BfV to monitor the AfD for extremism, particularly in light of right-wing violence in Chemnitz.

Andreas Kalbitz, the top AfD politician from the state of Brandenburg and one of six sharing the title of "chairman" at a national level, accused the mainstream parties of trying to start an anti-AfD panic.

"The call for the AfD to be observed by the BfV is more than a desperate act by the helpless older parties. We're seeing the desire for an abuse of power unmatched in reunified Germany," Kalbitz said in a press release.

When asked about the push to monitor the AfD, Chancellor Angela Merkel said that what the BfV investigates is "not a politcal decision, they are decisions based on facts."

Merkel said that she had heard from regional leaders that there were individual actions that needed to be monitored, and that the situation would be handled the same way on the federal level.

Although current polls have the AfD at around 16 or 17 percent support nationwide, according to the research institute Civey, polls also suggest that a majority of Germans would approve of the BfV monitoring the anti-immigrant party.

Angela Merkel has just returned from her summer holidays and she's already braving enemy territory. DW followed her to Dresden, a stronghold for far-right populists who have no affinity for the German chancellor. (16.08.2018)

Before Chemnitz, there was Kandel. The western German town has seen months of pro- and anti-migrant protests over a teen girl's murder. With a verdict on the way, residents hope their streets will soon return to normal. (02.09.2018)