Survey: European youth give thumbs up to the EU but dissent on immigration

From Germany to Poland, youth attitudes toward immigration and refugees differ starkly, a survey by Germany's Bertelsmann Foundation has found. But regardless of west or east, EU youth back the bloc. 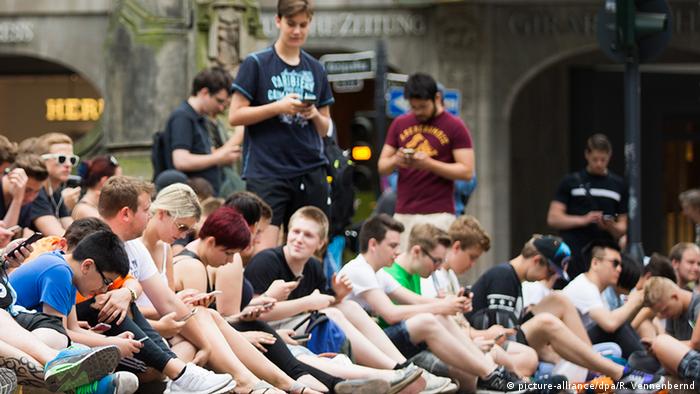 When it comes to attitudes towards refugees in the European Union (EU), young people reflect the geographic political divide between western and eastern member nations, a survey by the Germany-based Bertelsmann Foundation released Monday has shown.

Over the past three years, European authorities have struggled to cope with the influx of more than a million people who journeyed in smugglers' boats and overland to seek refuge in EU countries. Most lodged their asylum applications in wealthier western members of the bloc, namely Germany and Sweden. 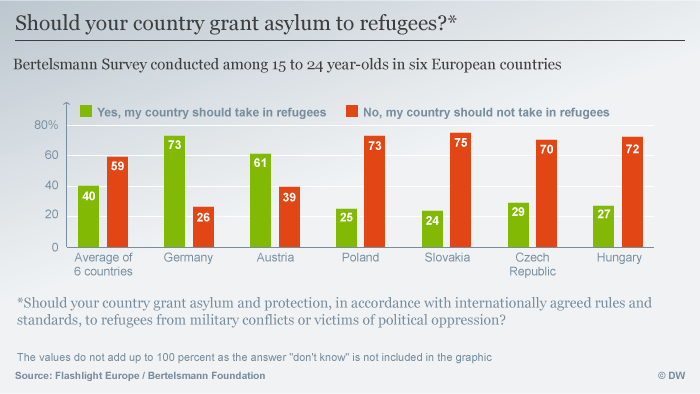 Researchers polled a total of 3,000 people between the ages of 15 and 24, 500 from each of the six countries. People responded via online questionnaires during the first two weeks of February. Despite the small sample size, the foundation maintains the results are representative of the countries.

The youths' attitudes toward refugees reflected their broader views on immigration. Young Germans were slightly more inclined than not to agree that immigrants contributed to the economic growth and general prosperity of their country. However, well over half of Polish, Slovakian, Czech and Hungarian youth disagreed. 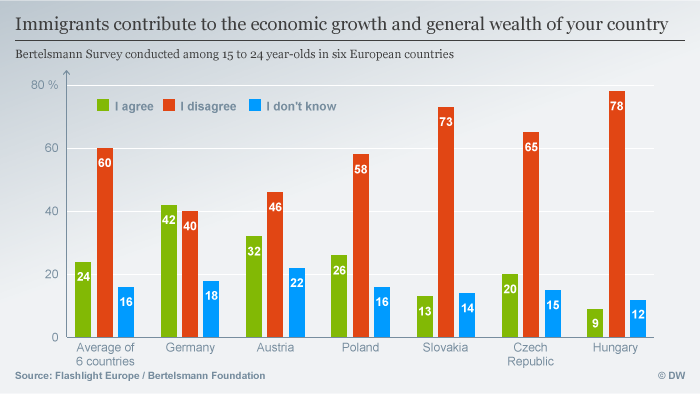 The survey's release comes as EU leaders prepare to meet in Rome to celebrate 60 years since the signing of the bloc's founding treaty. It's a rocky anniversary as overlapping crises threaten the unity of the European Union: a lack of cohesion on migration, the rise of nationalist movements and parties like the Alternative for Germany (AfD), Brexit maneuvers and the issue of Greece's unresolved debt. Despite these challenges, 70 percent or more of those surveyed in all of the countries were positive about their nation's EU membership.

A majority of young German respondents (87 percent) believed most strongly that their country's EU membership was a good thing overall. Slovakians were more skeptical, with about 30 percent saying it was bad for their country to be part of the bloc. However, the status quo was not acceptable to most - across the six countries, 67 percent saw remaining in the EU and working on its reform as the best option.

"Europe's youth are not impressed by anti-EU rhetoric. The good levels of approval among young people are an encouraging sign as the EU turns 60," Aart De Geus, chairman and CEO if the Bertelsmann Foundation, said.

Most prized among all the advantages of the EU was peace between the member nations, followed by the ability to work, live and study across the bloc.

The biggest problem for the EU among all those surveyed was "Islamist fundamentalism and terrorism," closely followed by "immigration and the arrival of refugees."

"In this context it's also worth noting that in particular young people from the four Visegrad countries [Poland, Hungary, Czech Republic, Slovakia] have a rather negative image of immigrants," the report's authors wrote. 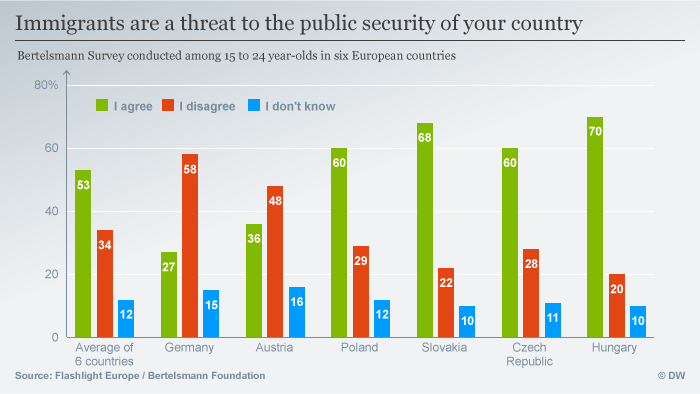 Other issues of concern to more than 60 percent of respondents across the six surveyed nations were "environmental degradation, climate change and its consequences," followed by "unemployment, job insecurity and economic instability" and "the gap between rich and poor."

Although many young Germans (64 percent) saw terrorism as an "important" or "very important" threat, environmental concerns and growing xenophobia closely followed. In Hungary and Slovakia, economic concerns ranked almost as highly as those related to terrorism or immigration.

Mission accomplished. The Netherlands has shown that populists can be stopped. With more elections on the way, Bernd Riegert writes that Europe must learn a lesson from the Dutch results. (16.03.2017)

Hungary's Prime Minister Viktor Orban has launched a fresh tirade against the EU's immigration policy. His government has announced it is building a second barrier along its border with Serbia to keep out migrants. (01.03.2017)

Muslims and Africans are the most frequent targets of racially motivated attacks. Anti-German sentiment is also playing a role. (17.12.2016)

Inside Europe: Hungary to detain all asylum-seekers in camps