What you need to know about the refugee crisis in the Mediterranean Sea | Germany | News and in-depth reporting from Berlin and beyond | DW | 20.03.2017

Over the weekend, the Italian coastguard rescued around 3,000 migrants off the coast of Libya. Here's a summary of the latest data on refugees and how the crisis is shaping up in the Mediterranean. 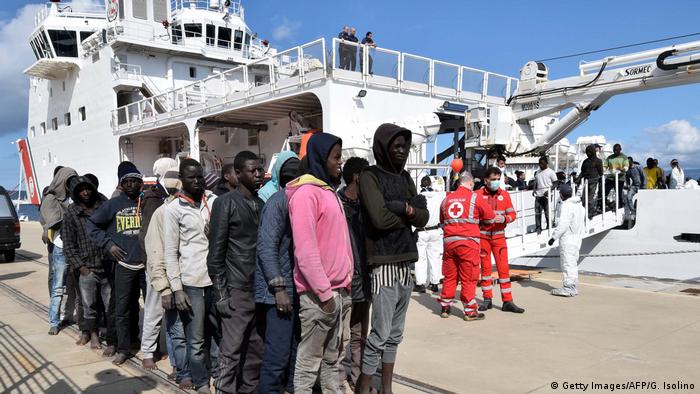 How many refugees have arrived in Italy until now this year?

The International Organization for Migration (IOM) says that altogether, 19,722 migrants have entered Europe by sea in 2017 until now. Eighty percent of the arrivals landed in Italy, with the rest coming to Spain and Greece. Last year by this time, around 154,416 migrants had arrived in Europe through the Mediterranean route, the IOM said.

Where are they from?

According to Flavio Di Giacomo, a spokesperson for the IOM, the composition of migrants arriving in Italy has changed a lot in recent months. In 2015, Syrians made up for the largest contingent of refugees arriving in Italy. They were followed by Eritreans and people from the Horn of Africa. Last year and in 2017, there has been an increase in the arrival of migrants from Western African countries. The number of Syrians and Eritreans has declined. At this moment, most refugees are coming from Guinea, Nigeria, Ivory Coast, Bangladesh, Gambia and Senegal, Di Giacomo told DW.

How do they come to Europe?

There are several routes used by migrants wanting to come to Europe. The Western Balkan route was closed in March 2016 only a few weeks before the EU signed a deal with Turkey, which agreed to stop migrants from crossing over to Greece.

According to Frontex, many criminal networks in Turkey help refugees cross the border. They are very efficiently organized and also tend to focus on specific nationalities like Syrians, Afghans, Pakistanis or Iranians. However, many migrants find the cost too high and therefore cross the sea themselves.

According to the UNHCR, the Central Mediterranean route from North Africa to Italy is now the primary entry point to Europe. This is a particularly dangerous journey. Last year, over 5,000 migrants died in the crossing.

What is the situation in Libya like for refugees?

Di Giacomo of the IOM says that refugees arriving in Italy through Libya usually flee because of conflicts, persecution, poverty and reasons related to climate change. However, most of these migrants don't want to come to Europe. They travel to Libya, which is still perceived as a country where they can find a job and send money home, but the situation in Libya is very dangerous.

Once they cross the borders, they become targets of abuse and human rights violations. They are kidnapped, detained illegally, tortured or raped and even killed. A majority of them don't want to come to Europe, but they see the sea crossing as the only way to save their lives.

What is the EU doing to stop migrant deaths?

The EU's border control agency, Frontex, is responsible for monitoring the waters and often rescues migrants who try to reach Europe in flimsy boats. Its operations, "Triton" in the Central Mediterranean and "Poseidon" in the Aegean Sea, help refugees in distress. The Italian Coast Guard and navies of several countries including Germany are involved in monitoring the waters.

Dunkirk refugee camp is the stuff of nightmares

In the wake of the dismantlement of the "Jungle" refugee camp in Calais, the migrant population of the Dunkirk camp, La Linière, has doubled. Abigal Frymann Rouch reports on their desperate attempts to reach the UK. (16.03.2017)

Iran's lengthy hosting of millions of Afghans has been praised by the UN's refugee agency, contrary to Tehran's image as sanctions-defiant. The UNHCR says Iranian generosity is an aspect "not told often enough." (16.03.2017)

The EU is meanwhile also trying to seal deals with North African countries, including Algeria, Tunisia and Libya, to stem the flow of refugees. Proposed measures, for example, by Libya's UN-backed unity government include a 800-million-euro grant from the EU for equipment to patrol its coast and territorial waters as well as to buy helicopters, radars and boats, according to Italy's Corriere della Sera newspaper.

If all goes well - what happens to them once they land?

According to the IOM, refugees arriving by sea to Italy are sent to ports in Sicily or Calabria. There are medical checks which they have to undertake and they are given legal information. Vulnerable groups are identified and then transferred to one of the over 2,000 reception centers in Italy.

According to the European Commission, once the migrants are identified and registered, they are channelled into an asylum procedure. Those not in need of protection are sent back.

Refugees who are caught by the Libyan Coast Guard are taken back to Libya and held in detention centers there.