Mission accomplished. The Netherlands has shown that populists can be stopped. With more elections on the way, Bernd Riegert writes that Europe must learn a lesson from the Dutch results. 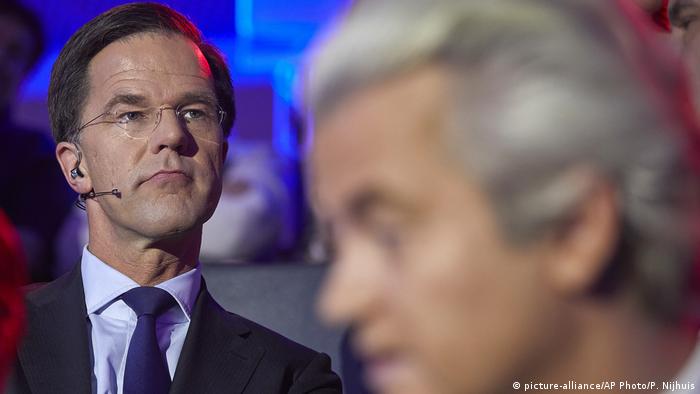 Committed democrats in France, Germany and other EU states can breathe a sigh of relief.

The Netherlands is not sliding in the direction of ring-wing populism. The liberal prime minister remains in office while euroskeptic and Islamophobe Geert Wilders falls short of fears or hopes, depending on one's perspective.

After populist victories in Great Britain with Brexit and in the United States presidential election, Dutch voters have sent a clear signal: the buck stops here. The Austrians also - just barely - prevented a right-wing populist from becoming federal president, though that remains a mainly representative office.

Netherlands a signal for French and German elections

The elections in the Netherlands could have a major signaling effect for the presidential elections in France in May and the parliamentary elections in Germany in September. The message being that populists can be stopped.

Dutch voters apparently did not trust Geert Wilders to possess either the ability to govern well or statesmanlike finesse in the crisis with Turkey, if he somehow would have been in a position to make a decision. His recipes for the Netherland's problems proved half-baked, similar to what we are experiencing in the United States and Great Britain.

No solutions from slogans

Political campaigners in France and Germany must now make clear that populists quite simply have nothing to offer but slogans.

The problem in France, however, is that the candidate of the middle class, Francois Fillon, is digging his own grave. Populist Marine Le Pen now has only one serious rival. If the French want to block Le Pen, they will have to elect the young independent upstart Emmanuel Macron.

Germany faces a different situation. Buffeted by results from the Netherlands and by rational arguments, Chancellor Angela Merkel and other reasonable powers can perhaps accomplish the unspeakable impossible - to keep the Alternative for Germany (AfD) as small as possible.

Shifts along the political spectrum

However, containing right-wing populists comes at a price. At least in the Netherlands, Mark Rutte's liberal party (VVD) has shifted notably towards the right. It struck more nationalist tones in order to take the wind out of Geert Wilders' sails.

The right-wing populists may not have won, but they still influence the political agenda and the behavior of the neighboring conservatives and the liberal forces in the political spectrum.

Rutte also had a stroke of sheer luck and politically profited from the full-blown hysteria of the Turkish president and his unbelievable comparison of the modern-day Dutch to the Nazis as well as genocide accusations that caused voters to rally behind their government. Rutte shone with a hardline approach. All thanks to Erdogan.

The EU must take heed

For the European Union, the Dutch elections mean the bloc now must not bury its head in the sand. Instead, it should use the momentum coming out of the Netherlands.

At the union's birthday summit meeting next week in Rome, EU leaders must provide a united answer to frustration and populist tendencies. Negative developments in Hungary and Poland, not to mention in Greece, which is governed by left-wing populists, must be clearly called out and shut down.

Voters in the Netherlands stopped the wave of populism. Now the EU needs to build more breakwaters.

Have something to say? Share your views in the comments below. The comment thread closes automatically 24 hours after this article's publication.

Searching for Wilders supporters in his hometown

Finding open supporters of Dutch populist Geert Wilders proved harder than expected in his hometown of Venlo. Although not everyone was a fan, Wilders' influence could still be heard. DW's Rebecca Staudenmaier reports. (15.03.2017)

Firebrand nationalist Geert Wilders was trailing behind Prime Minister Mark Rutte as the Dutch parliamentary campaign entered its final stage. The Christian Democrats have also made a steady run. (14.03.2017)

A new alliance of centrist politicians in France is good news for those wanting to prevent Marine Le Pen from winning the French presidential elections. Nonetheless, there is still a looming threat of populist success. (26.02.2017)