The former Green party head has become the country's first opposition president. His inauguration took place among internal political squabbles that could result in early elections. 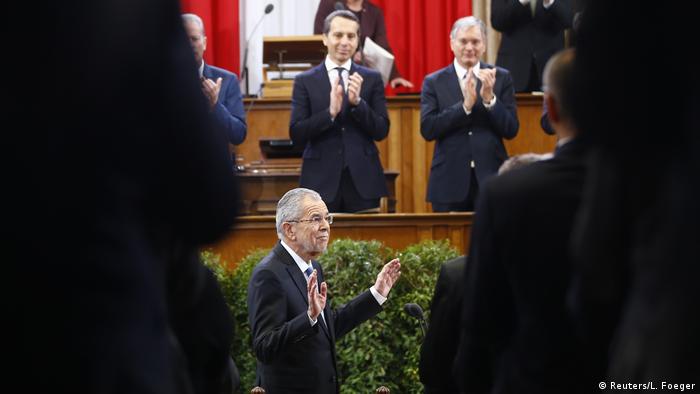 Alexander Van der Bellen swore his oath of office and stepped into the mostly ceremonial - but symbolically significant - role of Austrian president on Thursday. His term begins as fractious politics dominate Austria and a growing wave of anti-EU sentiment feeds on the election of euroskeptic leaders across the continent.

In his inaugural speech, he acknowledged the uncertainty that permeates the European Union.

"This Europe is unfinished and fragile; it is complex," he said, adding that nationalism and regionalism must not be answers to challenges. "Maintaining the [EU] freedom project is worth all effort.

"For me, the biggest danger is that we let ourselves be seduced by simple answers, that we fall into nationalism and small-country parochialism," he said in his speech. "In particular for Austria, which is a very small country."

As the ceremonial representative of Austria abroad, Van der Bellen, the child of political refugees and a committed liberal who supports a fence-free Europe, will set an outward-looking tone that sharply contrasts with a rising tide of populists making electoral gains in a year that will see elections in France, the Netherlands and Germany. His election in the Alpine nation took on prominent international significance by feeding the hopes of many pro-EU politicians who face challenges from populist rivals at home.

"Austria lies in the heart of Europe, not just geographically but politically," Van der Bellen stated. 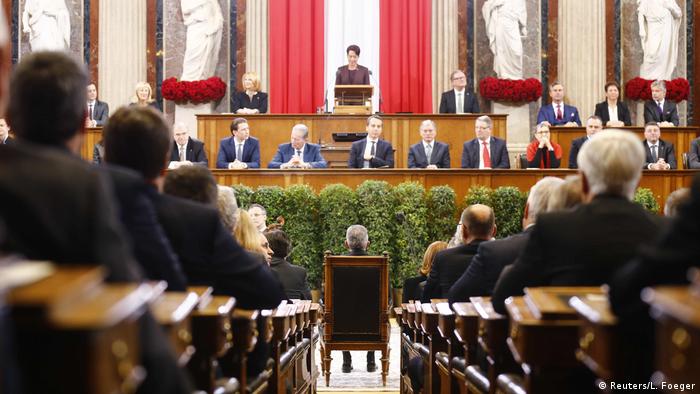 Van der Bellen assumes office amidst internal political wrangling. Austria's current grand coalition partners, the left-leaning Social Democratic Party (SPÖ) and the conservative Austrian People's Party (ÖVP), who together have dominated post-WWII governments, are struggling to hash out a reform plan focused on job growth, economic improvement and education. The feuding has given rise to speculations about whether early elections will be called before their scheduled date in 2018.

In his capacity as president, Van der Bellen will have to designate a new chancellor following parliamentary elections. He vocally opposes right-wing populism and has promised not to swear in the anti-immigration Austrian Freedom Party (FPÖ) leader Heinz-Christian Strache, should the FPÖ win a majority. The party currently leads the national polls in popularity, well ahead of all other parties.

End of an election saga

Van der Bellen carried 53.8 percent of the vote in the December 2016 elections, defeating his right-wing opponent Norbert Hofer (FPÖ) by a margin of 7.6 per cent.  This was an increase from Van der Bellen's 0.7 margin over Hofer in the original presidential vote in May. The Austrian Constitutional Court annulled this initial result due to vote counting irregularities.

The repeat elections, originally scheduled for October, then had to be delayed due to faulty glue on mail-in ballot envelopes.