Difficult days for the AfD

According to recent polls, Germany's populist party Alternative for Germany (AfD) is struggling. DW's Kay-Alexander Scholz went to Bavaria and Thuringia to find out who is to blame and how the party might recover. 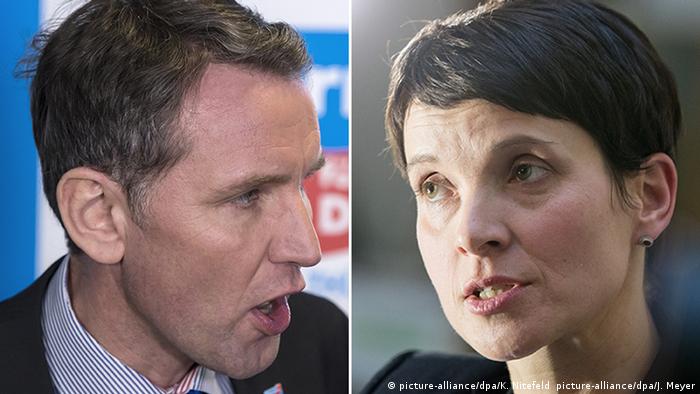 The once-surging Alternative for Germany (AfD) is down 20-25 points in the polls in just the last few weeks. Yet this is not the first time it has posted a quick slide. In early summer 2015, Germany's populist party was struggling to keep above the 5-percent minimum needed to hold seats in parliament. It wes propelled forward by the wave of refugees into Germany, putting the party's bread-and-butter issue of immigration and integration at the forefront of German politics.

"I'm not worried," Franziska Schreiber said. "Our base has only gotten bigger in the meantime." The party, which now holds seats in 10 state legislatures, is better positioned. Schreiber co-founded the "Young Alternative" and now works for Frauke Petry, AfD chairwoman and champion of the party's less extreme wing. 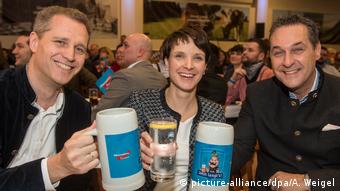 Sitting close to Petry at an Ash Wednesday event in Bavaria, Schreiber appeared annoyed – not by the polls, but by those coalescing around AfD-Thuringia chief, Björn Höcke. The party has to quickly come up with euro and tax policies, not get lost in intellectual debate.

Petry vs. Höcke: Actually not that far apart

The internal struggle between Petry and Höcke has been a burden to the party from the base up. A decision by national party leaders to suspend Höcke has not helped matters. The feud makes the base nervous.

"It's a power struggle," said Denny Jankowski, an engineer from Jena. "A suspension process is not the right way." Rather, the feuding party heads should come together, given how much their platforms have in common.

At the Ash Wednesday event, there was little connection made between Höcke's extreme statements and their potential downward pressure on poll numbers. He was applauded when he announced a criminal investigation of him had been dropped.

Polls are one thing, said Katrin Ebner-Steiner, AfD's Bundestag candidate for Deggendorf, a town in Bavaria. Direct experience is another. She points to considerable hidden support: "The number of small donations is astounding. Money for a new loudspeaker system came in no time."

There is also considerable opposition: vandalized information stands and homes, Ebner-Steiner said, and the difficulty in finding event space in Bavaria due to the negative PR or threats that venues contend with.

The polls were wrong about Brexit and Trump, all the more reason for supporters in Thuringia to doubt the ones about the AfD. "The AfD had been well written about," said Stephan Brandner, the city's AfD Bundestag candidate. "Now, just months before the election, we're being written off again."

"We have had an incredible number of party registrations at the local level," said Jörg Henke, a state legislator. That could be an unintended side affect of Martin Schulz, the chancellor candidate for the social democrats (SPD). His appearance on the campaign stage has ushered in a renewed and general interest in politics.

Björn Höcke respects Schulz's "political nose" for addressing social justice and recognizes the threat he poses to the AfD in luring away the "little guy."

Between pragmatism and purism

Both Petry and Höcke camps view the AfD as an alternative to Germany's establishment parties that they criticize as "political failures." In the longterm, an alliance with a more conservative, post-Merkel CDU appears conceivable. But for now, party purists want nothing to do with the CDU and its "perfidious multicultural platform," Höcke said.

As it once was for the Greens and often is for all new parties, so it is now with the AfD: a struggle between pragmatism and purism. If Facebook is any indication - where the two sides go after each other ruthlessly - the struggle for the heart of the AfD may be getting nastier.

The head of Germany's populist party AfD has met with high-level Russian politicians in a secretive meeting in Moscow. Petry's office refused to clarify who else attended the talks. (20.02.2017)