Germany′s conservatives present vision for Europe | Germany | News and in-depth reporting from Berlin and beyond | DW | 25.03.2019

Germany's Christian conservative parties have presented their joint vision for Europe ahead of May's election. While the CDU and CSU are against a European Finance Ministry, they do want a "European FBI." 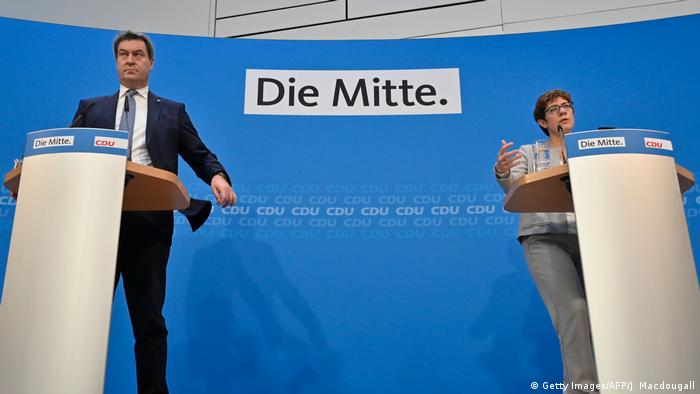 German Chancellor Angela Merkel's party began its preparations for a Europe without Angela Merkel on Monday with the launch of its new vision for May's European Parliament elections.

Annegret Kramp-Karrenbauer appeared as head of the Christian Democratic Union (CDU), which for once looked happy to present a united front with its Bavarian partners, the Christian Social Union (CSU).

At a press conference in an incongruously trendy Berlin warehouse on Monday, the new CDU leader was flanked by two ambitious Bavarians hoping to shape the post-Merkel era in conservative German politics: CSU leader Markus Söder, also new to his role and only a year into his state premiership of Bavaria — and Manfred Weber, the CDU/CSU's joint leading candidate in the May election, who has declared his ambition to succeed Jean-Claude Juncker as president of the European Commission later this year.

Stability with a European FBI

Kramp-Karrenbauer's opening salvo of the press conference included familiar platitudes (with a notable invocation of "Christian values" near the start) about "thinking from the middle" and defending Europe from the perceived "populists" on the left and right, who the trio painted as untrustworthy extremists out to sabotage democracy. 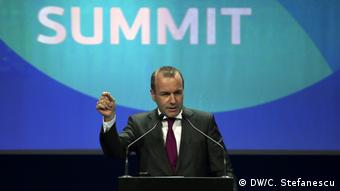 Manfred Weber thinks he should be the next European Commission president

"This election is not about whether you are for or against Europe," said Kramp-Karrenbauer. "We don't want the discourse to be determined by populists, out of the democratic center."

The key note of the afternoon was clear: the European People's Party (EPP), the center-right European parliamentary group that the CDU/CSU belongs to, is the only guarantor of stability in the European Union. To underline this, Weber drew attention to the EPP's decision last week to exclude Hungary's governing Fidesz party from its ranks, and called on center-left groups to apply a similar rigor.

But the trio also betrayed an awareness of the fundamental problem at the heart of European politics: promoting national interests while integrating Europe more closely to give it more power in the geopolitical arena. The CDU/CSU "stands for strong nations, and for a Europe of bridge-building," Kramp-Karrenbauer declared. "We are for a Europe that doesn't lie back and leave things to the Chinese or the Americans."

At the same time, the three politicians' plan revealed that they were against the creation of a European Finance Ministry to organize a budget. Equally, social security systems and job market policy should remain in the hands of the member states.

In other areas, though, the CDU/CSU want a significantly tighter European operation: The plan presented on Monday includes the concept of a "European FBI," which would see a significant expansion of information exchange and partnership programs among security forces. Under the new model, Europol would become more powerful, even if operative policing would stay at the national level.

Equally, the plan calls for more common defense projects, and a reduction in the number of different weapons systems, while stopping short of establishing a "European Army."

There was a palpable harmony between the two party leaders, and a sense that Merkel's absence at this level had eased tensions between the CDU and the CSU. As they presented their 22-page plan, both Kramp-Karrenbauer and Söder carefully patted away the question of whether the CDU had shifted to the right or the CSU had shifted to the left. 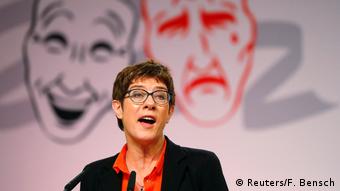 AKK's 'joke' did not go down well with Germany's LGBTI community

"I can't say who moved left or right, we all just moved towards each other," said an affable Söder. "These are processes that were started, … it wasn't that we had to find a compromise because it's the European election, it was more like we were all carried by a good common spirit."

"It's not one side has moved to the right and the other to the left," added Kramp-Karrenbauer. "We're one Union that judges the substance of many questions the same way."

Kramp-Karrenbauer had already set out her vision for Europe earlier this month with a notably more conservative position than, say, French President Emmanuel Macron. In an op-ed published in the Welt am Sonntag newspaper, Merkel's successor was specific about what she did not want: "European centralism, European statism, the communitization of sovereign debt, a Europeanization of social systems and of the minimum wage would be the wrong way."

The new CDU leader will be hoping that Monday's initiative will give her a boost: A new poll, released by TV stations RTL and n-tv, has shown that Kramp-Karrenbauer's personal approval rating has dropped by 12 points to 36 percent since she took over the party in December.

That seems to suggest that AKK's notable play to her party's conservative religious base (most theatrically with a joke mocking third-gender toilets in Berlin cafes) had not gone down well with the electorate at large.

Nevertheless, the poll still puts her comfortably ahead of the two possible rivals in the next battle for the chancellery: the Social Democratic Party's (SPD) parliamentary faction leader Andrea Nahles and SPD Finance Minister Olaf Scholz, both of whom also dropped points in the poll.