The law that 'enabled' Hitler's dictatorship

Eighty years ago, Germany's parliament passed the "Enabling Act." From that point on, Adolf Hitler could enact laws without the need of parliamentary approval. Only one party valiantly resisted. 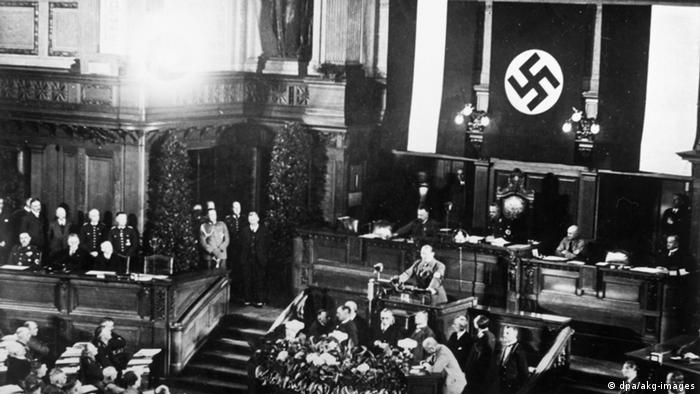 On March 23, 1933, Adolf Hitler stepped inside the Kroll Opera House in Berlin. Dressed in the brown uniform of the Schutzstaffel (SS), the chancellor of Germany made his way past the enthusiastic parliamentarians of his National Socialist party. 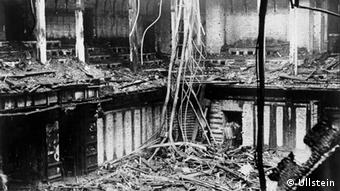 For opposition parties, however - chiefly the Social Democrats - the halls of the Kroll Opera were nothing less than a gauntlet. Manning every entry and exit were members of the Sturmabteilung (SA), or Storm Troopers, who, alongside the "brown shirts," insulted and intimidated opposition members.

Members of the Communist Party were not represented. They had either been stripped of political authority and removed, arrested or had fled to prevent their arrest.

For the remaining parliamentarians, an unhappy surprise awaited them within their temporary voting chambers. A three-dimensional swastika dominated the physical space of the room.

It was under these conditions that parliamentarians were supposed to carry out the country's most important vote since the founding of the Weimar Republic in 1919. The law in question would give Hitler's National Socialist party unchecked powers over the German state.

Foundation of a dictatorship

Just weeks earlier, Hitler's initial goal of obtaining an absolute majority of National Socialists in Germany's parliament had failed. As a result, on March 23, he placed before parliament a "Law to Remedy the Distress of People and the Reich" - also called the "Enabling Act."

The decisive sentence in the five-paragraph law read: "In addition to procedures prescribed by the constitution, laws of the Reich may also be enacted by the government of the Reich." 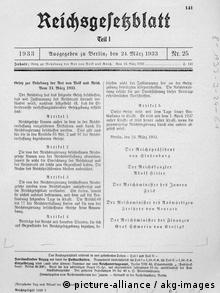 That second clause had drastic implications. With no need for parliamentary approval, Hitler's government could enact laws and enter into agreements or alliances with other countries. Practically speaking, Germany's parliament was being asked to render itself impotent.

Beyond that, fundamental laws written into the Weimar constitution were now to be done away with. For citizens, constitutional guarantees would be rendered void.

Granting these emergency powers to the German chancellor would endow his office with unassailable legal authority. The only thing between the chancellor and that power was the consent of two-thirds of parliament.

Sometime in mid-afternoon on March 23, Hitler spoke before the Reichstag, pleading his case for the passage of his "Enabling Act." His speech was full of assurances, and combating unemployment was a primary concern. He promised parliamentarians a "thorough moral cleansing of the body politic." Some of the deputies believed Hitler's words. Others sat uneasily on their benches.

Only Otto Wels, chairman of the Social Democrats, courageously ventured a rebuttal. "We German Social Democrats solemnly pledge ourselves in this historic hour to the socialist principles of humanity, justice and freedom," he said. As he stood before the National Socialists, Wels showed no fear.

"One can take away our freedom and livelihoods - but not our honor," he said. He also paid deference to jailed members of the opposition. "We salute the persecuted and the oppressed."

After the speech ended, Hitler took to the podium once more, working himself into a rage and dropping the mask of pacifism. In his final appeal to parliamentarians, he asked them to "sanction that which we could have taken anyway."

The terror instilled in the delegates was effective. The "Enabling Act" passed with 441 votes in favor. Only the 94 representatives of Social Democrats voted against it. 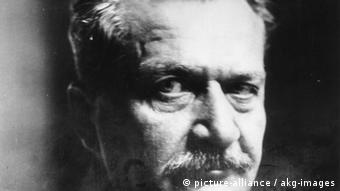 Wels fled to the French-occupied Saarland in '33, set up a government in exile in Prague and died in Paris in '39

As a result the bill was passed into law - and Adolf Hitler was one step closer to establishing a dictatorship. The law took effect the next day and immediately marginalized the Reichstag, many of whose members, whether in fear of repression and violent retribution or simply in blind faith that Hitler would hold to his promises, had voted yes.

In his own speech, the chairman of a Catholic centrist party spoke passionately in support of Hitler. "The fatherland is in extreme danger - we are not allowed to fail!"

Many delegates, along with their parties, saw - or perhaps preferred not to - that Hitler was in fact the biggest threat to Germany. The "Enabling Act" they had just passed included a four-year sunset provision.

Yet only a few weeks later there would remain just one political party in Germany, the National Socialists, who would extend twice more the life of this now "fundamental law of the Third Reich."

An Austrian cultural icon, the Vienna Philharmonic, has revealed new details of its history during the holocaust. Mysteries surrounding Jewish musicians, Nazi collaborators and a "ring of honor" have been solved. (12.03.2013)

Schoolchildren in Prague have helped gather 170,000 signatures to help Sir Nicholas Winton win the Nobel Peace Prize. Their efforts - and the 103-year-old's story - are extraordinary. (15.03.2013)