A new poll has found the CDU, the party of Chancellor Angela Merkel, is regaining its popularity. Meanwhile, the SPD, with its new leader, Martin Schulz, is seeing its approval ratings suffer. 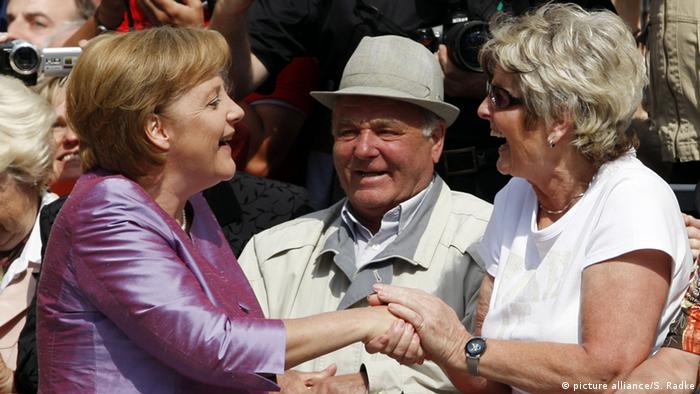 There are crises everywhere you look these days: from the Middle East, with its constant political turmoil; to Turkey, sliding toward autocracy under President Recep Tayyip Erdogan; to the US, where President Donald Trump appears to question the shared values of the West on a daily basis. Perhaps this is why Germans are apparently so happy to have Angela Merkel as their chancellor.

In a new study conducted by polling institute infratest-dimap, in conjunction with German public broadcaster ARD, the leader of the Christian Democratic Union (CDU) earned her best approval rating since the beginning of the refugee crisis in the fall of 2015.

The chancellor's popularity had plummeted after she welcomed nearly 900,000 asylum seekers - most of them from Syria and Afghanistan - into Germany.

But now, 64 percent of those surveyed say there are satifisfied with the job Merkel has been doing as chancellor, making her the most popular politician in the country.

The polling institute surveyed roughly 1,500 people about their current views at the beginning of the week of June 5. 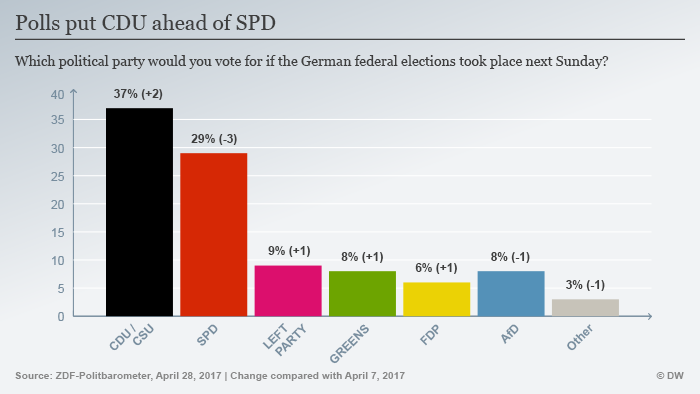 The chancellor is also the reason why her conservative party came out ahead when Germans were asked who they would vote for if they could vote now and not have to wait until the September election.

Meanwhile, the liberal Free Democratic Party (FDP) - which failed to clear the 5-percent hurdle to enter parliament in the 2013 elections for the first time in the party's history - also saw its popularity increase, coming in at 10 percent in the poll.

Read: How does the German general election work? 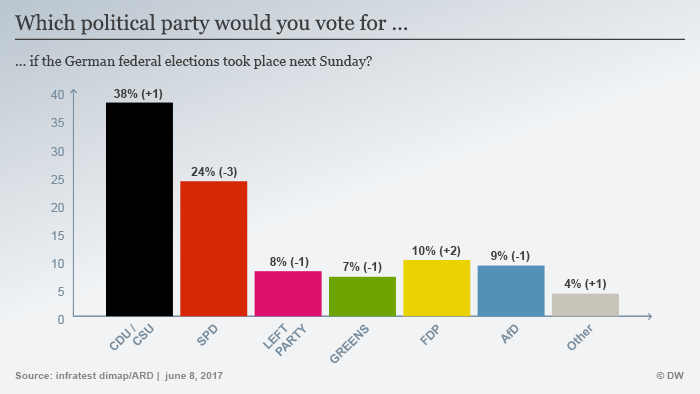 Right-wing populists not as popular in Germany

The two current opposition parties, the Left and the Greens Party, came in at 8 percent and 7 percent, respectively. The parties have suffered amid a time of global uncertainty, when most voters tend to put faith in the elected government.

The right-wing populist party Alternative for Germany (AfD), which has pushed for a radical change in Germany's immigration policy, earned 9 percent in the new poll. The party is almost certain to gain seats in the Bundestag. However, their popularity is not nearly as strong as those of other populist parties in Europe, like the National Front in France, whose frontrunner, Marine Le Pen, garnered nearly 40 percent of votes in the second round of the presidential election.

The results of the polling are especially dramatic for Martin Schulz. The former president of the European Parliament announced his surprise candidacy for chancellor in January and received unanimous support from the SPD at a party conference in March. Once seen as a fresh, new face who could reinvigorate his party, his candidacy attracted over 10,000 new party members. 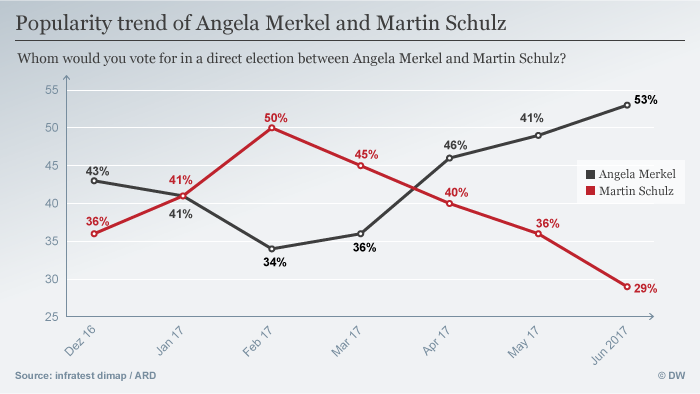 But while the "Schulz effect" helped the SPD briefly overtake the CDU in the polls, it didn't last for long. Schulz's popularity took a surprising nosedive, as Merkel once again became the focus of the world during her meeting with Trump in Washington and the G7 summit in Italy.

The SPD is now behind by 14 percentage points. According to the latest polling figures, only 36 percent of Germans are satisfied with Schulz.

New mistrust for Trump and the US

Another dramatic development in the polling is the low regard Germans now have for the US. Only 5 percent said they trust the new US president.

And only 21 percent of those polled said the US - long considered Germany's most important ally - could be trusted, about the same as for Russia.

Meanwhile, a whopping 94 percent said they had faith in France, especially after the election of President Emmanuel Macron. 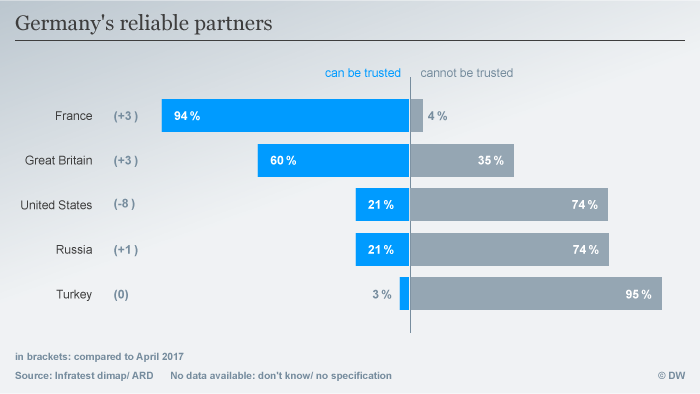