The European Commission vice president and former Dutch foreign minister Frans Timmermans will lead the Party of European Socialists (PES) in the 2019 European elections. He was the only candidate on the ballot. 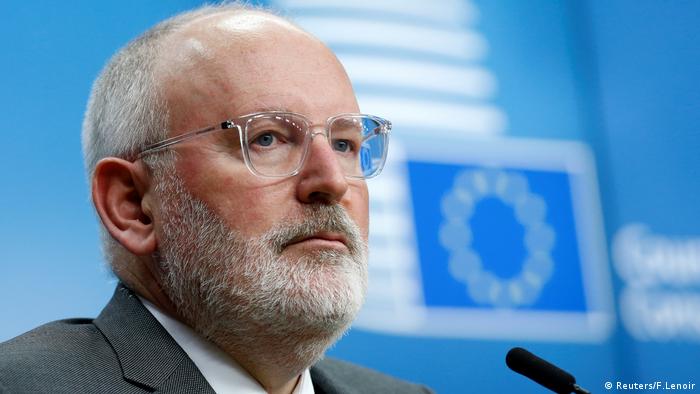 European socialist parties have approved Frans Timmermans of the Netherlands to lead them in May elections and to succeed Jean-Claude Juncker as head of the European Commission. Juncker is due to step down in mid-2019.

Timmermans, who currently serves as Juncker's deputy, won the election at the 11th congress for Europe's alliance of socialist parties in Lisbon on Saturday after his only rival, Slovakia's Maros Sefcoviv, dropped her candidacy in November.

The 57-year-old has been at the forefront of the EU's standoff with Poland's right-wing government over its attempts to undermine the rule of law.

"I am aware of the burden on my shoulders," Timmermans said in a speech to delegates in Lisbon. "But how can I fail with a family like this behind me."

Socialist parties have suffered major electoral defeats across the continent in recent years amid a surge in support for anti-establishment and nationalist parties.

The EPP elected Manfred Weber, an ally of German Chancellor Angela Merkel and a member of Bavaria's Christian Social Union (CSU), as their lead candidate in November.

"It's about the choice between Manfred Weber from Bavaria and Frans Timmermans from Europe," said Achim Post, a German Social Democrat and PES secretary general. "Frans, we are relying on you and you can rely on us."

Groupings in the European Parliament first elected lead candidates — also known by the German translation "Spitzenkandidaten" — in the 2014 European elections.

But the procedure has no legal basis. Member governments are eligible to nominate anyone to the role regardless of the electoral outcome.