The German chancellor has addressed MEPs in Strasbourg, laying out Germany's vision for the future of Europe. Seven months ahead of EU parliamentary elections, she gave her personal assessment of where the bloc stands. 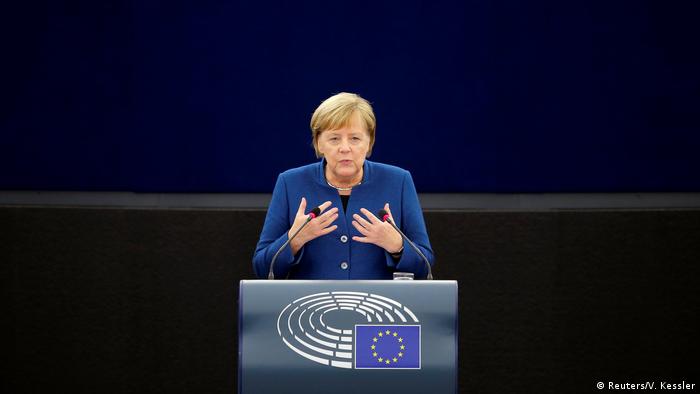 As the clock winds down on her final term as chancellor, Angela Merkel began by looking back on the EU's achievements and highlighting Europe's diversity, which was also its strength, she told the European Parliament in Strasbourg on Tuesday.

Merkel warned that Europe's values were under attack and she highlighted the principle of European solidarity: "We are experiencing that it is more and more difficult to speak alone, and that's why it's so important to stand side by side."

Only a stronger Europe, Merkel said, would be able to defend its values.

"The times when we could rely on others are over," Merkel told the assembly. "This means we Europeans have to take our fate fully into our own hands." To that end, she said she would also propose the establishment of a European Security Council with a rotating presidency that would help to streamline European defense and security policy. "We should work on a vision of one day establishing a real European army," the Chancellor remarked.

In a clear show of support for French President Emmanuel Macron's plans to create a European defense force, Merkel said the EU should work on a vision for a European army "that would complement NATO," and not undermine it. A European army, she said, would "show the world that there will never again be war between European countries."

Merkel appealed for tolerance and solidarity and said "nationalism and egotism should no longer have a place in Europe" to applause from the parliament.

"Solidarity is always linked to commitments of the community, and the principles based on the rule of law," Merkel said.

"We need to develop our monetary policy better," Merkel said. "We're working on a banking union."

"We have to look at responsibility and control, a banking union and then later a European insurance system," the chancellor added.

Addressing the challenges facing the eurozone, Merkel said it and the common currency could only function "if every individual member fulfills their responsibility for sustainable finances," a clear reference to the current showdown between Italy and the European Commission over the former's refusal to back down from its big-spending budget, which the Commission rejected last month.

"We want to extend a hand to Italy," Merkel said later. "But Italy also agreed to all sorts of rules and it can’t just tear them up."