German Chancellor Angela Merkel and US President Donald Trump emphasized the importance of trans-Atlantic ties at a press conference on Friday. Iran, trade and defense spending were high on the agenda.

But Merkel's "working trip," which follows French President Emmanuel Macron's state visit to the United States, did not appear to bring significant progress on a range of disagreements, including US tariffs and Trump's opposition to the Iran nuclear deal.

Iran: Trump said, "We must make sure that this murderous regime does not get nuclear weapons." Merkel said the 2015 nuclear deal with Iran was a "first step" toward curtailing Iran's ambitions in the Middle East. "But we also think ... that this is not sufficient in order to see to it that Iran's ambitions are curbed and contained," she added.

US tariffs: Merkel said the two leaders had "an exchange of views" on whether the US would extend an EU exemption for US tariffs on steel and aluminum imports, but gave no further details. "The decision [on whether to grant the extension] lies with the president," she said.

Defense spending: Trump said NATO allies need to "spend 2 percent and hopefully much more of GDP on defense," he added without explicitly mentioning Germany. Merkel said that Germany's defense budget would increase in 2019 and that it was on its way to meeting the 2 percent goal.

Trade deficits: Trump said the US wants "fair and reciprocal" trade with European countries and cited the US trade deficit with the European Union. Merkel said Germany wanted "fair trade" in line with global trading rules. She also hinted at opening negotiations on a bilateral US-EU trade deal.

North Korea: Trump thanked Merkel for helping the US in its "maximum pressure" campaign toward North Korea. He added that the US is "not going to be played" in peace talks with Pyongyang. Merkel credited Trump for remaining vigilant in maintaining sanctions on North Korea and said she would work with Trump to stop the North's nuclear program.

French President Emmanuel Macron spent three days in the US earlier in the week in a state visit to the US. The French president used his trip to lobby Trump to stay in the 2015 nuclear deal with Iran and refrain from slapping tariffs on goods from allied countries.

The US enacted tariffs on steel and aluminum imports in late March, but temporarily exempted European imports from the measures at the last minute. Germany's exporting companies called on Merkel to convince Washington to maintain the exemption beyond May 1.

Protecting the Iran deal from Trump

Trump has repeatedly criticized the 2015 Iran nuclear deal and threatened to withdraw the US from it unless changes are made by May 12. The agreement suspended international sanctions in return for Iran promising to halt its nuclear program. Merkel and Macron want to save the deal. 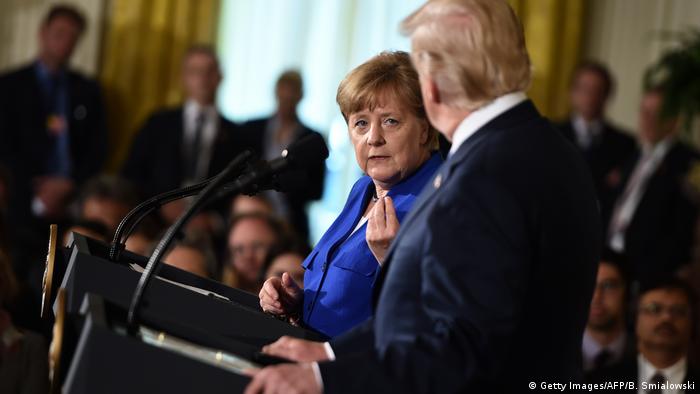 During her visit, Merkel gifted Trump a framed map created in 1705 that depicts the Palatinate region in western Germany. Some of Trump's ancestors emigrated from the city of Kallstadt in the region to the United States.

The German chancellor ate a cheeseburger with bacon and french fries after she arrived in Washington on Thursday evening, according to a waiter from J. Paul's restaurant. The waiter, who told German broadcaster n-tv about the meal, said Merkel washed it all down with a pinot grigio.

In the strange current reality of Washington, Macron's state visit was a success. His rousing speech in Congress showed that a personal bond won't keep him from standing up to Trump's policies, says DW's Michael Knigge. (25.04.2018)