In the strange current reality of Washington, Macron's state visit was a success. His rousing speech in Congress showed that a personal bond won't keep him from standing up to Trump's policies, says DW's Michael Knigge. 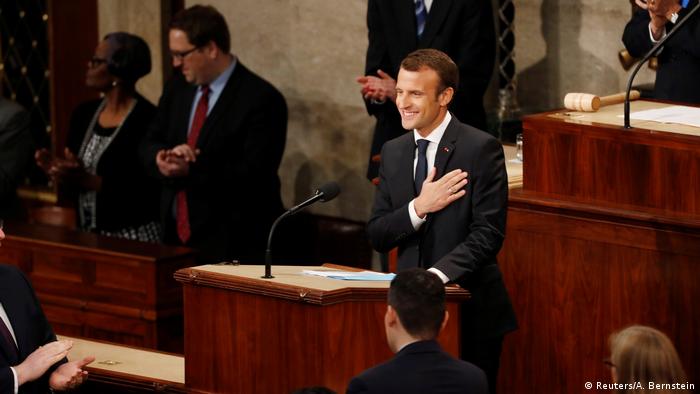 Emmanuel Macron's extended visit to the United States consisted of two parts. The first mostly featured discussions between Macron and Donald Trump, who had invited his French counterpart to come to Washington for the first state visit by a foreign dignitary during his presidency. Macron, while seizing opportunities to explain policy differences, was largely deferential to his host.

Like other leaders, including German Chancellor Angela Merkel before him, Macron was not spared the "Trump treatment." The president flicked what he said was dandruff off Macron's suit, saying he wanted to make him "more pretty." Trump also gave the French president an air kiss and was his usual blustery self.

In public remarks before and during a joint press conference, Trump did not appear to budge on any of Macron's key issues: the continuation of the Iran nuclear deal, a continued US role in Syria beyond the defeat of the Islamic State, the need to address climate change, and a complete end to the threats of US tariffs against European Union countries. Macron took it all in stride, and managed to hide any embarrassment he may have felt at Trump's slapstick-like shenanigans and the US president's blunt rebuke of his political goals.

After witnessing the first part of the visit, one could have got the impression that Trump was not treating Macron as an equal. It was also difficult not to feel  some sympathy for Macron, because after showering his younger counterpart with nice-sounding compliments, showing him George Washington's home, Mount Vernon, and staging a pompous state dinner for him at the White House, Trump then publicly bashed all his proposals. The best answer Macron could get out of Trump was his standard "we will know soon" remark.

Rejection of Trump's GOP in Congress

But then came the second act of Macron's visit: his address before a joint session of Congress. In that speech, held in English, an anomaly for a French president, Macron offered nothing less than an outright repudiation of the policies Trump stands for, as well as the tactics that brought him to power. Macron delivered an impassioned plea for democracy, freedom, tolerance, human rights and international cooperation, in a strong defense of embattled Western values.

That Macron did so in the heart of America's democracy — in front of a Republican-controlled Congress that with few GOP exceptions has backed a president who has often shunned or is indifferent to those values — gave his speech additional weight.

But can Macron's visit still be considered a success, even though it seems unlikely that he will have swayed Trump's stance on key issues?

Firstly, because in Trump's Washington one has to be grateful for the wins one gets. After Trump's surprising election victory there was only half-joking talk in the US capital that Hungarian Prime Minister Viktor Orban could get the nod for the first state dinner. This was not far-fetched speculation. Remember, the first foreign politician to visit President-elect Trump was Brexit mastermind Nigel Farage. And remember that just this week Trump called North Korean leader Kim Jong Un "very honorable."

So in that context, the invitation being extended to Macron, the leader of a traditional US ally but also a key member and defender of the EU, was never a given. Indeed, it is a remarkable success for both him and Brussels.

Secondly, Macron used his trip, particularly his Congressional speech, to outline and defend Western values and EU unity. By doing so emotionally and eloquently, he detailed a vision for the world that can be described as an antidote to Trump's worldview. Highlighting such an alternative was both highly welcome and very necessary.

France's Macron decries nationalism in speech to US Congress

Myanmar: 6 dead as police crack down on anti-coup protests 4h ago

Opinion: Football — no coming home until there's a coming out 2h ago

Opinion: Saudi crown prince has blood on his hands 15h ago