Chancellor Angela Merkel spoke with Emperor Akihito on the second and final day of her visit to Japan. Later events with students and scientists covered topics from North Korean disarmament through to cows' digestion. 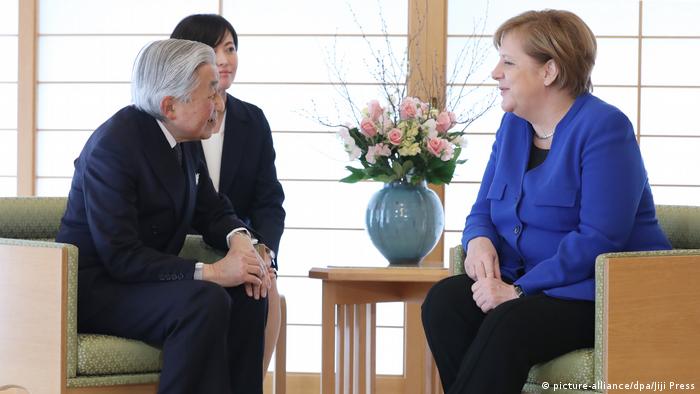 Angela Merkel had a third and probably final audience with outgoing Emperor Akihito of Japan in Tokyo on Tuesday, ahead of a planned meeting with Akihito's successor, Crown Prince Naruhito, later in the day.

The details of their discussions during the audience, considered a rare honor for politicians visiting the country, were not made public.

Merkel left Tokyo's Imperial Palace bound for an event with students at the city's Keio University. As in her meeting with Prime Minister Shinzo Abe on Monday, the German chancellor paid particular attention to global free trade.

On WTO reforms and free trade

Merkel told students that Japan planned to focus heavily on reforms of the World Trade Organization during its time as the holder of the G20 presidency.

"And in this, there is a lot of common ground between Germany and Japan," she said. The government in Berlin was closely following the current trade disputes between the US and China, two "very big players" in world trade, Merkel said, adding that Germany and Japan would swiftly feel the fallout of a collapse in consumption in China as a result of the trade tensions.

She cited Germany's auto industry and Japanese suppliers of Chinese technology giant Huawei in particular, saying this explained why Germany and Japan would push for a new multilateral approach to global trade.

Without mentioning Donald Trump or US policy explicitly, Merkel said it was important not to simply listen to promises from Pyongyang on the issue of nuclear disarmament. With a view on Japan in particular, she advised against "striking deals there now at the expense of third parties."

Japan has not been part of talks on Korean disarmament and rapprochement between the North, the South and the US.

"We will always advocate, along with Japan, for sustainable and successful denuclearization of the Korean Peninsula," Merkel said. She also noted that Germany taking its stint as president of the UN Security Council meant that Berlin now chaired the UN's sanctions committee. 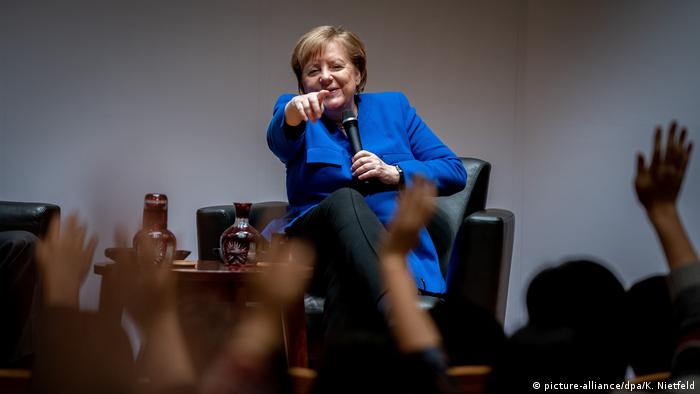 On China's growing role, the world's expectations, and Huawei

The Christian Democrat chancellor also called on China to do more on the world stage as its global clout intensifies.

"China will have to grow into its responsibility for a peaceful world order," she told the Keio University attendees, which has a lot of international students. This would likely include participating in UN missions.

"The more dominant and the more economically developed China becomes, the more requests will be made of China in areas like these," Merkel said.

On artificial intelligence and humanity

Merkel encouraged students to think carefully about ethical and moral questions when working on advancements in fields like artificial intelligence. Flawed humans should be sure to retain the upper hand in such relationships, she said.

"What we do should serve the people," she said. "It will surely one day be possible to read our thoughts." This, she said, could be a great help for people who can't speak; but what if it became possible for all? "Do we want that? What would that mean for everyday society?"

She raised similar questions on topics like prosthetics, organ transplants, and maybe more in future.

"If I were to get a chip installed in my brain, so that I could think more quickly or better, would I then be the same person?" Merkel asked the chamber. "At what point does my humanity end?" 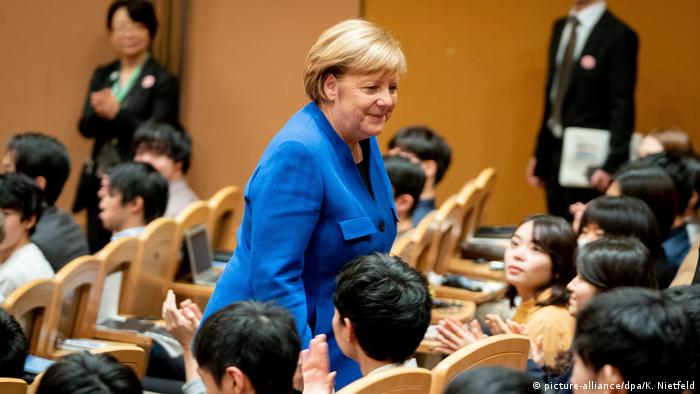 Merkel returns from her two-day trip to Japan on Tuesday

On coal power and cows' diets

One tough question from the floor touched on environmental policy, and Germany's contentious expansion of its coal power sector — the combined upshot of bids to limit Germany's existing energy dependence on Russia, and Merkel's decision to shut down nuclear German power plants in the immediate aftermath of the Fukushima nuclear meltdown in 2011.

Merkel repeated a recent pledge that Germany would aim to cease all coal mining by 2038, saying "unfortunately we still have too much brown coal [lignite]."

But the challenges in environmental policy, the chancellor noted jokingly, are many and varied around the world.

"Then what's left over is the agricultural sector," Merkel said. "There, we need to teach cows to eat properly and emit less CO2. That will be a very big challenge."