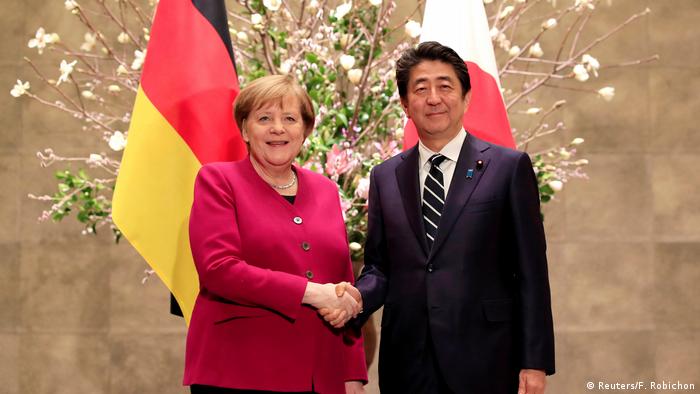 The German chancellor's fifth visit to Japan began on Monday, three days after a free trade pact came into effect between the country and the European Union.

At a time of increasing friction over global trade, with US tariffs still in place on steel and aluminum and Brexit on the horizon, Merkel's visit was touted in Germany as a chance for two major world powers to stand up for open trade in defiance of Donald Trump.

On a tight schedule, Merkel was received with military honors and held talks with Abe at his official residence. Speaking after the pair met, Merkel hailed the free trade agreement as "an important message to the world."

Merkel said the talks had been "between two national leaders who want to work together, who believe that there can be very good win-win situations when all partners work together".

The chancellor said the agreement showed "that we are prepared to make agreements -- even if multilateral agreements are to some extent in choppy waters". Abe underlined that point, saying Merkel’s visit — so soon after the pact came into effect — had a "powerful" significance.

Merkel and Abe discussed international trade and Japan's priorities for its upcoming presidency of the G20 group of economic powers. They also addressed the US and Russia's suspension of the Intermediate-range Nuclear Forces Treaty (INF).

Both leaders struck a similar tone when they addressed the World Economic Forum in Davos last month, with the Japanese leader vowing that his country would push to rebuild trust in the global trade system.

"Germany and Japan are, in these politically troubled times, close and well-acquainted partners,” said Merkel's spokesman Steffen Seibert, ahead of the trip. "As two great democracies, we also stand for a set of shared values.”

As major exporters, being the world's third and fourth largest economies respectively, Japan and Germany are keen to preserve free trade on a wider basis. 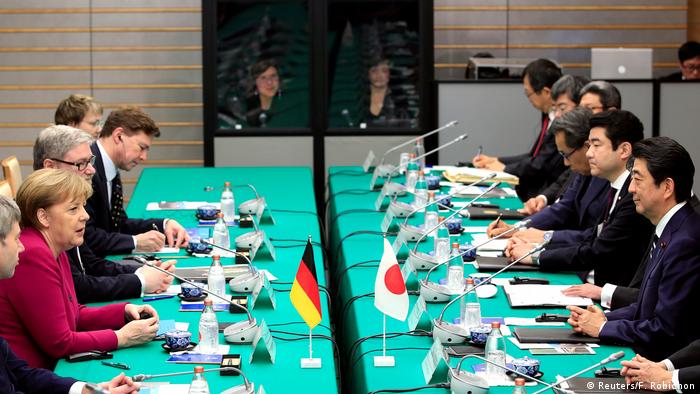 As major exporters, both Germany and Japan are keen to keep international trade runnning smoothly

Merkel is also keen to defend multilateralism, at a time when major world powers, such as the US and Russia appear increasingly focused on acting unilaterally. The chancellor used her Davos speech to tout "win-win" outcomes in international relations.

Russia on Saturday suspended the Cold War-era INF Treaty after the US suspended it and threatened to fully withdraw within six months unless alleged Russian violations of the deal's terms cease. The development has prompted fears of a new nuclear arms race akin to those of the Cold War.

Although both Japan and Germany would have the capability to produce nuclear weapons, both have refrained from producing them after the Second World War. However, Germany participates in NATO nuclear weapons sharing and Japan enjoys protection under the US nuclear umbrella.

Traveling alongside Merkel on the trip is a delegation representing multiple sectors of the German business community, including electronics, artificial intelligence pharmaceuticals and financial services.

Japan is one of Germany's key trading partners, with trade between the two countries totaling some 42.5 billion euros (48.8 billion dollars). The amount is up from 37.2 billion in 2015, with Japan now Germany's second largest trading partner in the region.

The amount of trade is expected to increase after the Economic Partnership Agreement between the EU and Japan — creating what signatories dubbed the "world's largest" free trade area — came into force on February 1.

On Tuesday, the chancellor is set to meet 85-year-old Emperor Akihito, who in May is due to abdicate in favor of his son, Crown Prince Naruhito, on health grounds.