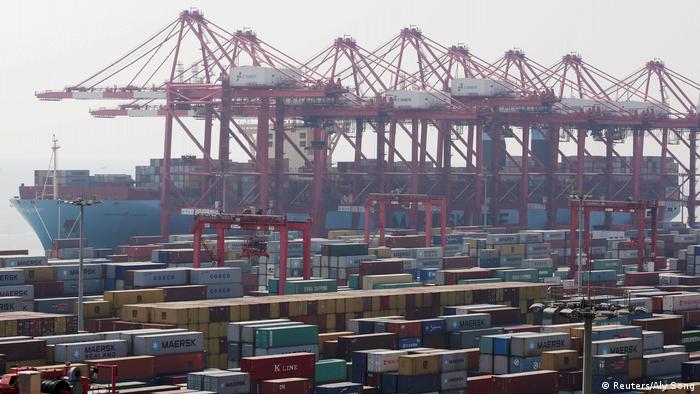 What the US has threatened: Since taking office, Trump has criticized the European Union, and particularly Germany, over the US trade deficit with the bloc. He has also said the deficit is unfair given that many European members of NATO do not meet the alliance target of spending at least 2 percent of their GDP on defense. To try and narrow the deficit, he has threatened to slap tariffs on EU cars, a move that could severely hurt German automakers.

What the US has done: The US exempted the EU from a 25 percent steel tariff and 10 percent aluminum tariff in March. But it lifted the exemption on June 1 despite vehement European opposition to the decision.

How Europe has responded: The EU has said it would retaliate in July to the steel and aluminum tariffs by placing tariffs on US goods from areas of the US that voted heavily for Trump during the 2016 presidential election. The list of goods are worth €2.8 billion ($3.4 billion) and include steel, Bourbon, peanut butter, cranberries and orange juice. The bloc has also filed a complaint against the US tariffs at the World Trade Organization (WTO).

What the US has threatened: Trump has focused most of his ire on China. He has threatened multiple times since the beginning of 2018 to place tariffs on a raft of Chinese products to try and close the US' $375-billion trade deficit with the country and to punish Beijing over its alleged theft of US intellectual property. The administration has also said it could tighten restrictions on Chinese investments in the US and strengthen export controls.

What the US has done: The US did not exempt China from the steel and aluminum tariffs in March. And despite talks between Washington and Beijing to try and balance the trade deficit, Trump announced in June that the US would place a 25 percent tariff on Chinese goods worth $50 billion from July 6.

How China has responded: Beijing responded to the steel and aluminum tariffs in April by imposing tariffs ranging from 15 to 25 percent on $3 billion worth of US goods, including pork, nuts and wine. China said in June that it would mirror the US tariffs on $50 billion worth of goods by targeting the equivalent worth of US items. The list includes US beef and soy beans and is designed to hurt US regions that voted heavily for Trump.

United States vs. Canada and Mexico

What the US has threatened: Trump pledged to renegotiate the North American Free Trade Agreement (NAFTA) with Canada and Mexico during the 2016 election after calling it the "worst trade deal ever." He has threatened to withdraw the US from the agreement since negotiations over its renewal began in mid-2017.

What the US has done: Canada and Mexico also received exemptions to the steel and aluminum tariffs along with the EU. And as with the EU, the US lifted the exemptions for both countries at the beginning of June.

How Canada and Mexico have responded: Both countries were furious after the exemptions were lifted. Canadian Prime Minister Justin Trudeau called the tariffs "insulting," which prompted Trump to withdraw US support for a Group of Seven (G7) agreement in early June. Canada and Mexico have also filed their own complaints against the steel and aluminum tariffs at the WTO and announced retaliatory tariffs on US products. Mexico has targeted $3 billion worth of US products, while Canada has targeted just over $16 billion worth of US goods.