Beijing has announced retaliatory measures after the US imposed fresh tariffs on Chinese technology products. Beijing announced tariffs on a $34 billion list of American goods including soybeans and whisky. 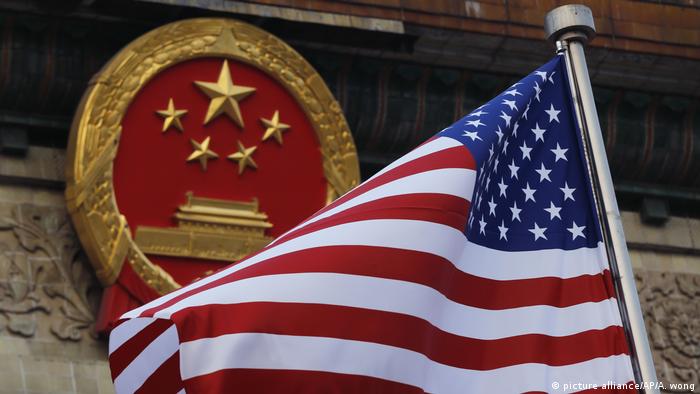 A US flag flying next to the Chinese national emblem

China's Commerce Ministry announced on Saturday tariffs on US goods as the trade dispute between the two countries escalates.

The tariffs include import duties on a $34 billion (€29 billion) list of American goods, which include soybeans, electric cars, orange juice, whisky, salmon and cigars.

The measures come into effect on July 6, the same day as the US tariffs on Chinese goods, with an additional $16 million to be imposed later.

The Chinese government said on Saturday it was responding "in equal scale" to US President Donald Trump's tariffs on Chinese imports.

"The Chinese side doesn't want to fight a trade war, but facing the shortsightedness of the US side, China has to fight back strongly," a Commerce Ministry statement said.

The two giants have been trading tariffs and threats of tariffs for weeks.

US tariffs over 'unfair' practices

US President Donald Trump announced that the US would begin collecting 25 percent tariffs on Chinese goods worth $50 billion from July 6, repeating his pledge to clamp down on what he deems unfair trade practices by China. "The United States can no longer tolerate losing our technology and intellectual property through unfair economic practices," he said.

The latest list specifically targets products that benefit from China's industrial subsidies, including the "Made in China 2025" technology plan.

"We have the great brain power in Silicon Valley, and China — and others — steal those secrets," Trump said in an interview with Fox News on Friday. "We are going to protect those secrets, those are crown jewels for this country."

"China's government is aggressively working to undermine America's high-tech industries and our economic leadership through unfair trade practices and industrial policies like 'Made in China 2025,'" US Trade Representative Robert Lighthizer said in a statement.

Chinese foreign ministry spokesman Geng Shuang said on Friday that the Chinese government had drawn up its own list of $50 billion worth of US products that would face retaliatory tariffs if Washington raised the stakes. The new list includes beef and soy beans, liable to hurt US agriculture in rural Republican heartlands.

China "has no choice but to strongly oppose this, due to the United States' myopic behavior that will harm both parties," Beijing's Commerce Ministry said in a statement.

China also called on other nations to take "collective action" against the US' tariff regime. The European Union, Canada and Mexico have also been slapped with US tariffs on steel and aluminum. All have threatened to impose their own duties on US goods in return.