Intellectual property (IP) is back in focus as US President Donald Trump slaps wide-ranging tariffs on China for allegedly stealing American technology and IP, and eroding US firms' competitive edge. 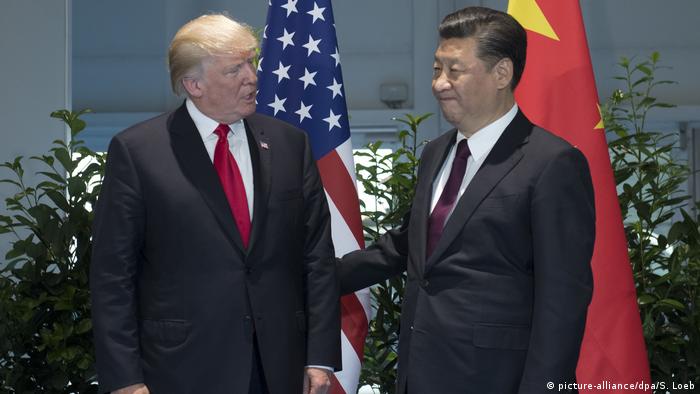 US President Donald Trump has announced he would slap wide-ranging tariffs on imports of Chinese goods, accusing Beijing of stealing American intellectual property. "We have a tremendous intellectual property theft situation going on," said Trump before signing his executive memorandum on Thursday.

To grasp what is at stake, one needs to understand what intellectual property really is. "Intellectual property refers to creations of the mind: inventions; literary and artistic works; and symbols, names and images used in commerce," according to the World Intellectual Property Organization, an intergovernmental body set up to promote the protection of IP worldwide.

That means if a person or a company comes up with a new idea or product, or a process that offers a new way of doing something, then they are granted an exclusive right over the use of their creation for a certain period of time. IP rights are generally enforced by granting patents, trademarks and copyrights to the originators of innovative ideas.

In recent years, complaints by American and European firms about the lax IP regime and copycat culture in China have been growing louder. They accuse Chinese pirates and counterfeiters of faking their creations and tricking customers into believing that they are buying legitimate products. Whereas counterfeits misappropriate brand names, copies imitate original items but are clearly branded differently to show they are from different producers.

An example of Chinese copying relates to the iPhone. While America's Apple gave the world the popular phone, China came up with the HiPhone — a much cheaper replica of the original product.

Chinese businesses are also routinely accused of releasing copies of hit movies, popular music and other products, with blatant disregard for the rights of their makers. Big Chinese companies like Xiaomi, Weibo and Youku are regarded as imitators of American firms such as Apple, Twitter and YouTube.

Sometimes, even human lives are at stake when counterfeiting involves food products and medicines. American businesses have been irked by what they perceive as rampant IP rights violations in China and they have lobbied hard to push the issue high on the agenda of Washington.

US officials estimate the cost of IP theft by China could be as high as $600 billion (€510 billion). This has prompted the US government to repeatedly urge China to act against the controversial practices. But Beijing's compliance remains half-hearted, say observers, much to Washington's chagrin.

"The problem of IP rights violations in China is serious because it has not gotten better over time," said Rebecca Liao, a US-based corporate attorney and China expert. Although IP protection laws are becoming more robust in the world's second-biggest economy, she told DW, "The Chinese government has become more explicit in its encouragement of domestic companies to pursue technology transfer from foreign companies."

"Going forward, US and European firms will have to be even more cautious about their China entry strategies, and that represents a real loss in economic gain," she added.

Agatha Kratz, an expert on the Chinese economy at the European Council on Foreign Relations, is also of the view that the issue of IP theft in China "has been and still is very serious."

"However, my understanding is that this (IP theft) is not what is at stake here: what is at stake is policies by the Chinese government that require foreign companies in China to share their technologies either with the state and its regulators (for national security concerns), or to engage in partnerships with local companies in certain sectors, with the requirement of tech transfers," Kratz told DW. "This isn't IP theft per se. Instead, it is a way to strong-arm foreign companies into sharing and disclosing their technology," she said.

"If you add to that the undeniable practice of IP theft in the Chinese economy, this is a lot to shoulder for foreign players, who are relying on their tech advantage to maintain a competitive edge."

A much broader debate about IP rights has been taking place across the world over the past several decades. Intellectual property is one of the most contentious issues in global economic policymaking, and it elicits strong passions among various stakeholders.

Supporters of strong IP protections argue that they are needed to foster innovation and promote creativity, by ensuring that the economic rewards of innovation go to the innovator.

They stress that the absence of such protection allows imitations and counterfeits to threaten and outperform original products. This, in turn, undermines the willingness of companies and individuals to invest in new ideas and products, thus undercutting innovation and economic development.

Critics, however, stress that excessive and broad IP protections have the potential to hamper innovation and constrain competition. Problems also arise when companies try to unreasonably prolong patent protections or aggressively expand the coverage of existing patents by exploiting legal loopholes, in a bid to prevent competition.

"It is a complicated picture," said Nicholas Lardy, Senior Fellow at the Peterson Institute for International Economics. "IP protection promotes entrepreneurship but needs to be balanced with anti-monopoly policies," he told DW.

The US has disagreements over IP rights with not just China, but also other developing nations like India. For instance, successive US governments have expressed fierce opposition to generic drug manufacturing in India, criticizing the nation's weak protection of patent rights.

While the US today accuses China of committing IP theft, there was a time when the US was widely regarded as a pirate nation. In the 18th and 19th centuries, the US routinely engaged in theft of industrial secrets and IP belonging to the United Kingdom.

The US, for instance, failed to provide copyright protection to foreign creative works through most of the 19th century. The lack of copyright protection in the US at the time prompted the renowned British writer Charles Dickens to complain bitterly, noting "the exquisite justice of never deriving sixpence from an enormous American sale of all my books."

And until the 1980s, the US required foreign writers to manufacture their books in the country as a condition to seek copyright protection.

"It is absolutely true that many of the trade practices prohibited by international organizations now, including high tariffs, dumping, theft of intellectual property and other anti-competitive measures, were instrumental in helping today's developed countries establish their economic power in the late 18th and 19th centuries," said Liao.

"That said, I don't think it is fair to then say those same practices have to be allowed now. The international system of economic governance we've set up post-WWII depends on cooperation and coordination, and growth should be pursued in a more mutually beneficial way," she underlined.

PIIE expert Lardy underscores another difference between what the US did back then and what China is doing now. "China is a party to the WTO which prohibits theft of intellectual property. The US was not a signatory to a comparable agreement in the late 18th, early 19th centuries," he said.

Problem for China too

In recent years, China's government has been strengthening its patent, trademark, and copyright laws. Major Chinese businesses have also increased their adherence of foreign copyrights. Still, the country has a long way to go in terms of bringing its IP rights regime on a par with the ones in the US and the EU.

"China's government is well aware foreign companies are unhappy about theft and appropriation of intellectual property, and they are aware that it is a domestic problem between Chinese companies as well," said corporate attorney Liao.

"To pursue a holistic and effective solution, the Trump administration should coordinate with international organizations to take action in a way that takes on some of the characteristics of the intellectual property protection initiatives the Chinese government is currently pursuing."

Regarding strong-arming of companies into transferring their technology, Western governments can be more direct and proactive, and should probably demand more from China in the form of greater reciprocity, said ECFR expert Kratz.

"They could (and already do, to a certain extent) ask that the Chinese market be more open to foreign companies (and under fewer such restrictive policies) given that our own markets are very open themselves," she suggested.

"In the absence of an opening, Beijing could risk seeing increasing scrutiny on EU and US market - which is actually the current trend, with Brussels and Washington becoming more concerned of Chinese investments into their respective markets."

When asked whether he sees any scope for US-China IP problems to end in five years from now, Lardy said: "China has a stake in protecting its own intellectual property so I would anticipate problems will diminish."

US President Donald Trump has asked his trade office to examine the alleged theft of American technology and intellectual property in China. It is the first direct trade measure by his administration against Beijing. (15.08.2017)

Just as US President Donald Trump seeks to target Beijing over what he thinks are "unfair trade practices," the Treasury Department has confirmed that China has more holdings of US debt than any other nation. (17.08.2017)