US set to impose $50 billion worth of tariffs on China over intellectual property | Business | Economy and finance news from a German perspective | DW | 22.03.2018

US President Donald Trump has announced a raft of new tariffs against China over intellectual-property violations, targeting more than 100 different Chinese goods and potentially inviting a fierce response from Beijing. 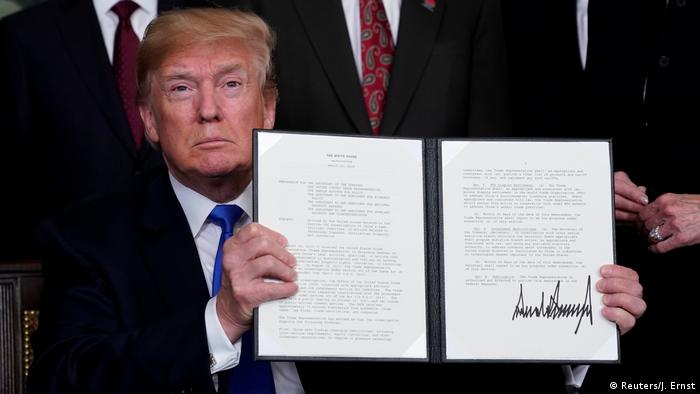 In what White House officials on Thursday billed as a historic move against Chinese "economic aggression," President Donald Trump has signed an executive memorandum ordering US trade officials to levy tariffs on Chinese products worth an estimated $50 billion (€40.6 billion). Within 15 days, the officials are expected to provide a list of products in ten sectors, which Beijing identified as strategic under its "Made in China 2025" economic policy.

Speaking at the White House in Washington, Donald Trump indicated the amount could even be higher, saying the punitive tariffs were coming after an investigation into China's alleged theft of US intellectual property. "We're going to be doing a section 301 trade action. It could be about $60 billion. But that really could be a fraction of what we're talking about," Trump said.

In addition, the US president also directed the US Treasury to propose measures that could restrict Chinese investments in the United States. Moreover, the United States would also pursue litigation in the World Trade Organization to address China’s discriminatory licensing practices.

The new measures are Trump's first trade action directly aimed at China, which he has blamed for the hollowing out of the American manufacturing sector and the loss of US jobs. They come under the US Trade Representative's "Section 301" investigation into alleged misappropriation of US intellectual property by China.

'US tariffs have no big impact on Chinese economy'

In August last year, the US president instructed Trade Representative Robert Lighthizer to probe allegations that China violates US intellectual property under section 301 of the Trade Act of 1974. After seven months of investigation, US officials found strong evidence that China uses foreign-ownership restrictions to compel American companies to transfer technology to Chinese firms.

The investigation also suspects Beijing directs firms to invest in the US with the purpose of engineering large-scale transfers of technologies that the Chinese government views as strategic. Moreover, there was reportedly strong evidence China supports and conducts cyberattacks on US companies to access trade secrets.

On Thursday, Trump tried to make it clear he wasn’t trying to provoke China. "I view them as a friend. I have tremendous respect for President Xi," Trump said. But, the US's trade deficit with China was "the largest deficit in the history of our world," he added.

US companies from Walmart to Amazon have warned that sweeping sanctions against China could raise consumer prices and hit the stock market. But Lighthizer told the House ways and means committee on Wednesday that Washington was mindful of the potential impact on US households.

The sweeping US tariffs will test the resolve of Chinese President Xi Jinping, whose government has so far reacted in a measured fashion to Trump's repeated complaints about the United States record $375 billion deficit with China.

But on Thursday, the Chinese Ministry of Commerce warned that the measures could turn out to be "detrimental to both sides." In a statement, the ministry said that China strongly opposed such unilateral and protectionist action, and would take "all necessary measures" to firmly defend its interests.

A spokesperson for the Foreign Ministry, Hua Chunying, added that it was "unrealistic and unreasonable to require complete equality in trade," and noted the US itself was to blame for the huge deficit.

"China is the largest export market for US aircraft and soybeans, and the second largest export market for automobiles and cotton, Hua told reporters. "How many soybeans does China have to buy to match a Boeing? Or, if you will, how many C919 [Chinese civil airliners] does the US have to purchase in order to balance the number of Boeing aircraft the US has sold to China?"

Read more: China: Trade war with US would be disastrous

However, in discussions behind closed doors, senior policymakers in Beijing on Thursday told a group of foreign dignitaries that China "will not overreact" to the US measures.

The decision comes as policy makers including IMF Managing Director Christine Lagarde warn of a global trade conflict that could undermine the broadest world recovery in years.

A simulation by Oxford Economics suggests a 25-percent US tariff on $60 billion worth of Chinese exports, with comparable retaliation, would reduce China's growth by about a tenth of a percent this year and a little less next year. The US economy, on the other hand, would be less affected.

The think tank's chief Asia economist, Louis Kuijs, warned however that the key risk was that tit-for-tat trade measures didn't end with this baseline scenario. "More measures may follow, and tit-for-tat responses could lead to escalation. Collateral damage in other economies will be significant and could further complicate the trade friction."

According to a Bloomberg Economics estimate, a global trade conflagration could wipe $470 billion off the world economy by 2020.