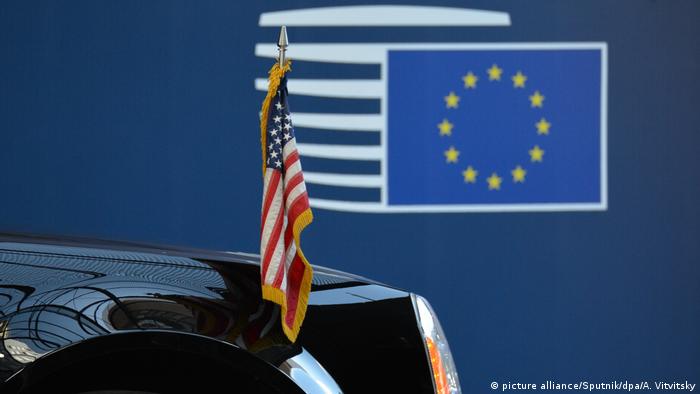 To put the ongoing noise about possible trade wars into perspective, EU-US trade in goods was worth about €600 billion ($710 billion) in 2016, while the US imported €5 billion worth of European steel and exported a mere €1 billion.

As Bloomberg pointed out, this would then be a trade war whose effects would probably be smaller than statistical anomalies.

This $21.4 billion "asymmetry" would cover the US steel and aluminum trade deficit four times over. The differences are even bigger for services, where both parties claim a surplus.

"Trump is quite right on a number of things," ifo trade expert Gabriel Felbermayr told DW, pointing to EU tariffs on cars of 10 percent  and EU food barriers, where on average, the EU charges 5.2 percent and the US 3.5 percent.

"But he has a distorted perception of EU-US trade relations," Felbermayr said. "He only talks about the US deficit in goods, but forgets to mention that the US is running a massive surplus against the EU in services and corporate profits."

Before the G7 summit, Trump had said in a tweet that the US was running a deficit of $151 billion with the EU, although according to its own figures, the US is running a surplus of $14 billion on its current account balance with the EU and has been in surplus since 2008.

The specter of punitive tariffs

The specter of punitive tariffs

Germany is not the EU

Of crucial importance, however, at least for Trump, is US Department of Commerce data that show a US current account deficit with Germany of $65 billion.

"It is wrong to pick out individual EU member states. The EU is a customs and economic union in which individual member states are closely linked. The US surplus of almost $100 billion with the Netherlands is largely due to Germany," Felbermayr said.

US internet giants access the German market via headquarters in the Netherlands for tax purposes, with a similar pattern seen in Ireland, he added.

Others argue that some of the trade imbalances are down to simple old-fashioned competitive advantages.

For example, diesel-powered vehicles — which make up 39 percent of Germany's car market — fell 20 percent in the first three months of 2018 after a German court banned diesel emissions in some cities, but even if tariff barriers were dropped, "the German auto market is unlikely to be under threat from an influx of US cars, given consumer preferences for smaller more fuel efficient cars in the EU," BMI said in a note recently. 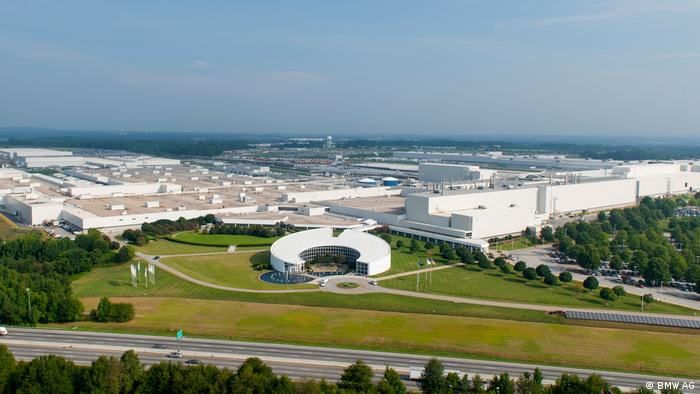 The BMW plant in Spartanburg, South Carolina, is the company's largest, employing 10,000 people

But cars can still hurt

In response to Trump's threatened tariffs on European imports such as steel and aluminum, the EU threatened to slap a 25 percent duty on jeans, cosmetics, bourbon and Harley Davidson motorcycles — perhaps a deliberately cartoonish list of US products that seemed designed to paint Trump's attempted trade war as farcical.

But as this phony war rumbles on in largely symbolic terrain, the sense that Trump may, in fact, be serious increases.

"We believe the far bigger prize for the White House is auto exports, most significantly from Germany," BMI analysts wrote in a recent note to clients.

The US Commerce Department recently launched an investigation that could reportedly result in a 25 percent auto-import tax. EU cars to the US today face a 2.5 percent tax, while US cars to the EU face a 10 percent tax at least.

"Europeans do not understand the Red States. Trump is an egomaniac, but he does exactly what he said he is gonna do," an American businessman living in Germany for 30 years told DW.

Bernhard Mattes, the new head of the German Association of the Automotive Industry, meanwhile, said recently that a trade war must be "avoided by all means."

The German car industry relies heavily on the US market. In 2017, its US revenues were €29.4 billion and 1.3 million German vehicles were sold in the country, 10 percent of total production. The industry directly or indirectly provides 2 million German jobs.

Of these 1.3 million vehicles, 800,000 were built in US factories and many more were made in German factories in Mexico, part of the NAFTA.

The estimated losses in the luxury-vehicle market alone could be €4.5 billion on up to 600,000 units and BMW would likely be hit the hardest, followed by Volkswagen and Daimler, experts said.

BMW has the highest level of US-sourced vehicles of the three, at 35 percent. Volkswagen and Daimler have 17 percent and 26 percent. Companies with no factories in the US, including Volkswagen-controlled Audi and Porsche, are also vulnerable.

German carmakers with big US operations like BMW — America's largest exporter of cars — and Mercedes-Benz maker Daimler would also be hit by proposed Chinese import tariffs on US imports.

Beijing has threatened to double tariffs to 50 percent on imported cars in retaliation against Trump's proposed tariffs on products including vehicles and automotive parts.

"The Germans stand to lose the most in absolute terms if the tariffs are enforced," a study by asset managers AllianceBernstein in April showed.

IHS has estimated that BMW will export 89,000 vehicles from the US to China in 2018, while Mercedes will export 65,000, making them the biggest US-China exporters.

Tough talk and glimmers of hope

German Economy Minister Peter Altmaier called on Monday for European states to close ranks in the trade dispute with the US, while Chancellor Angela Merkel threatened Trump with retaliation in an appearance on German broadcaster ARD on Sunday evening.

"Both trade partners are extremely vulnerable. Both stand to lose from an escalating trade war. Europe now needs to unite and explain US figures to the Americans. Europe also needs to signal retaliatory measures in the digital sector like the digital tax discussed by the EU Commission, if the Americans decide to impose tariffs on European cars,” Felbermayr warned.

The German car industry is lobbying Republican politicians with German car plants in their home states, with Daimler targeting Republicans in Alabama, home to its big US factory, while BMW is hoping it can do the same in South Carolina, where its Spartanburg plant, the company's largest globally, is based, employing 10,000 people, many of its cars being exported to China.

China has tried to quell the concerns of German automakers following Beijing's plans to impose quotas on electric car production. China's premier has also encouraged Germany to push forward with liberalization in trade. (02.11.2016)

The EU has said US tariffs would be met with a "proportionate response." The European Council, IMF and WTO have warned Trump he is very wrong about trade wars being easy to win. (07.03.2018)