German Chancellor Merkel and Chinese President Xi may strive to champion global free commerce and present a united front against US President Trump's protectionism. But all is not well between the two trade partners. 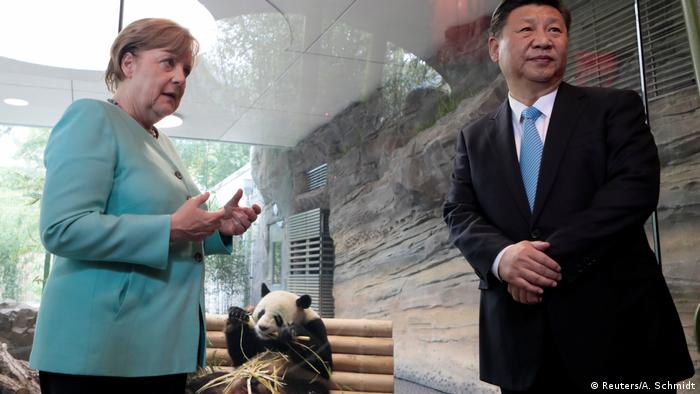 As global trade confronts growing protectionist tendencies, export-reliant economies like Germany and China that have built their prosperity on an open and multilateral rules-based world economy have much at stake.

That's why trade topics are high on the agenda of German Chancellor Angela Merkel when she holds talks with Chinese leaders in Beijing on May 24 and 25. This is Merkel's eleventh trip to China during her time as chancellor over the past 12 years — more than any other Western leader.

Merkel's latest China trip comes at a time of heightened trade tensions with the US, where President Donald Trump has been threatening to slap tariffs and other measures on countries that have a trade surplus with the US.

The Trump administration has also been busy with either pulling the US out of free trade deals or cajoling countries into renegotiating them, stirring fears of a looming trade war, which could end up hurting the entire world economy.

Under these circumstances, observers say, Merkel and Chinese President Xi Jinping might want to send a message that they will join forces and do their utmost to avoid a bruising trade conflict and keep markets open.

"Both countries are in agreement that open markets and rules-based world trade are necessary. That's the main focus of this trip," Merkel's spokeswoman Martina Fietz said in Berlin on Friday.

In her weekly podcast ahead of her visit, Merkel stressed that Beijing and Berlin "are both committed to the rules of the WTO" (World Trade Organization) and want to "strengthen multilateralism."

Despite their attempt to present a united front against Trump's protectionist stance, China and Germany have their share of complaints against each other when it comes to trade and investment.

German and European firms operating in China have long complained about the lack of a level-playing field and uneven access to the Asian country's gigantic market. The complaint has grown louder over the past decade as Chinese investment into Europe, and the US, ballooned.

For instance, annual Chinese foreign direct investment in the 28-nation EU bloc jumped from €700 million in 2008 to about €35 billion in 2016, according to a recent report released by the Mercator Institute for China Studies (MERICS), a Berlin-based think tank on China, and Rhodium Group.

Investment in the other direction, however, lagged behind, with many blaming it on China's restrictive investment policies and an array of formal and informal hurdles for foreign firms operating there.

European officials say Merkel's trip offers an opportunity for the German leader to press the Chinese to deliver on their promises of trade liberalization. "(Beijing authorities) have been talking very much about freer trade and more open trade but very little has happened in practise up until now," European Commission Vice President Jyrki Katainen told Reuters.

Some observers say Trump's protectionist rhetoric and moves, in fact, might have spurred the Chinese leadership to liberalize and open up their domestic market to increased foreign competition. They point to Beijing's recent decision to phase out ownership limits for foreign automakers, shipbuilders and aircraft firms.

"Although China's official announcement downplays that US factor, the tough stance from the US has contributed to or speeded up the decision," Alicia Garcia-Herrero, chief economist for Asia-Pacific at Natixis, an investment bank, and a senior research fellow at Bruegel, told DW.

Notwithstanding the recent measures, Western analysts argue that China has not agreed to more significant changes that would fundamentally reform and open the Chinese economy, nor has it altered its commitments to state-sponsored development of next-generation industry.

They say China would have to take a raft of additional steps to create a level-playing field between domestic and foreign firms. "Among these are lifting foreign equity restrictions across all sectors; eliminating requirements that foreign companies enter into joint ventures with local partners to gain access to the Chinese market; and lifting technology transfer requirements," said Barbara Weisel, managing director at Rock Creek Global Advisors, an international economic policy advisory firm.

Another issue that requires addressing is government subsidies to Chinese state-owned firms, the expert noted. "China should eliminate subsidies to its state-owned and state-controlled companies that distort competition and result in production overcapacity, including in steel and aluminum; and should end discriminatory regulatory treatment against foreign companies," Weisel, who served as Assistant US Trade Representative for Southeast Asia and the Pacific under President Barack Obama, told DW.

Protection of intellectual property is one of the major friction points between China and Germany. "Germany and the US have common interests when it comes to this issue," said Liu Liqun, professor at the Beijing Foreign Studies University, adding that both Berlin and Washington are of the view that Beijing is not doing enough on this front. "Although China has made some progress, it is not enough and China also acknowledges this. I would say it needs more time."

Climbing up the technological ladder

It's unclear, though, how much leverage Western leaders like Merkel have to persuade Chinese leaders to implement measures needed to tackle these problems, particularly against the backdrop of Beijing's ambition to become the world's leading industrial power in the coming decades.

As part of a 10-year strategy, called "Made in China 2025," Beijing intends to reconfigure the Chinese economy away from labor-intense and low-value production towards higher value-added manufacturing. It also includes plans to improve innovation, integrate technology and industry, strengthen the industrial base, foster Chinese brands and enforce green manufacturing.

Furthermore, it aims to promote breakthroughs in 10 key industries where China wants to be a leader in the future, including information technology, robotics, aerospace, railways, and electric vehicles. To achieve this, Beijing plans, among other things, to continue a trend of state-directed innovation, proposing to establish 40 manufacturing innovation centers by 2025.

Given the privileges China intends to continue providing domestic companies under its China 2025 plan, "foreign companies are likely to continue to face discriminatory treatment and unfair competition in China," Weisel said.

"It will be important for the United States and the EU to continue pressing the Chinese government to reform and liberalize its economy and to provide non-discriminatory treatment to foreign firms," she added. Professor Li, however, says Beijing is unlikely for now to change its policy of supporting state-controlled enterprises.

China's attempt to climb up the technological ladder poses a particular challenge for Germany, Europe's economic powerhouse which currently enjoys an edge in advanced industrial manufacturing.

At present, the Asian giant is a big buyer of Made-in-Germany goods, but there is growing concern in Berlin that government-supported Chinese firms are increasingly aiming to get their hands on key technologies by acquiring German and European companies in strategic industrial sectors, including robotics, energy systems and biomedicine.

A study released on Tuesday by the German media group Bertelsmann indicated that of 175 firms either partly or completely bought by Chinese investors between 2014 and 2017, 112 were in areas that China was targeting for its Made in China 2025 strategy.

Germany and more broadly the European Union, did not have the tools to oppose China's industrial strategy, the report said.

Fears of Chinese competition, coupled with the widely shared feeling of a lack of reciprocity in market access, has prompted Berlin to tighten rules protecting German firms from foreign acquisitions. But China views these moves in a negative light. Ahead of Merkel's visit, China's ambassador to Germany, Shi Mingde, took a rare swipe at her administration, pointing to a "protectionist trend in Germany."

"China is opening itself further, but we are concerned that the already open gate of Germany will close again," he told the German daily Stuttgarter Zeitung. "China sees a protectionist tendency in Germany."

Washington and Beijing have agreed on measures to "substantially" reduce the US trade deficit with China after two days of talks. The deal calls for China to start buying more US products. (19.05.2018)