Opinion: US import tariffs — nerves of steel, round two

The United States has made true on its promise to hit the European Union with higher import tariffs on steel and aluminum. But there needs to be a distinction between bluster and true inequality says DW's Timothy Rooks. 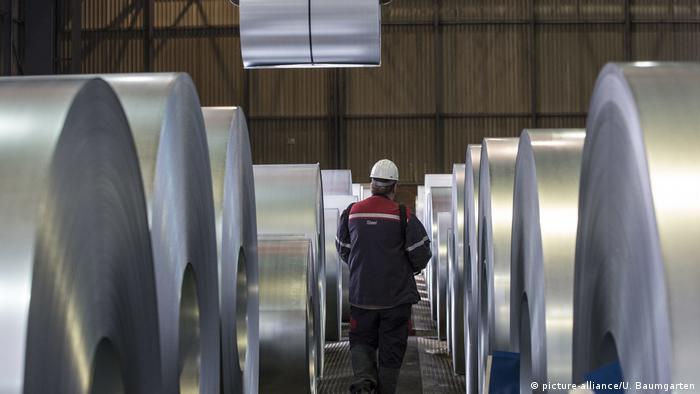 International trade is neither fair nor equal. Anyone who claims otherwise is simply not telling the truth or does not understand history or the complex global balance sheet. Making the scales more balanced is a noble cause but cannot be achieved by picking fights.

Nonetheless, it's official. US import tariffs of 25 percent on steel and 10 percent on aluminum from the European Union, Canada and Mexico are now in place. As expected, America has not buckled under pressure from its allies. Donald Trump has ignored the advice of his own Department of Defense and car manufactures, unnecessarily alienating a big part of the world in the process.

Europeans are justifiably furious, and many have called for swift retaliatory measures on American staples like bourbon and Harley-Davidsons. But speaking in one voice is no easy task for a group of 28 disparate countries. The EU is often too timid, wanting to please everyone. Mexico on the other hand has already shown grit and imposed increased tariffs on select items in retaliation. And though no one profits from a trade war, the US is sticking to its go-it-alone path.

What gets lost in all the tweets, shouts and whining is the fact that the US does have a legitimate right to seek a realignment of global trade to and from its shores, even if it has speciously wrapped its decision in "national security" robes. It's obvious to me that all sides need to keep cool and work on fair and constructive solutions.

Yet the Trump administration sees such tactics as a cudgel which it can use to bully anyone it views as weaker, which for many in America means everyone else. For his part, Trump has long been known in the business world for his threats and bluster, but now these rudimentary approaches are indiscriminately overturning decades of ever closer cooperation and sadly becoming the US's standard operating procedure.

What is so strange though about this move and other similar actions is that deregulation is a cornerstone of the Trump agenda. Tax reforms and the rollback of many financial rules at home prove this. Oddly when it comes to international trade, however, the administration is obsessed with scrutinizing every detail and likes to boss around company bosses.

Only by putting national interests' aside can the real winners or victims of a tariff framework be heard — businesses. In the run up to today's decision, companies have been complaining about this high-stakes poker game. Many are hoping that these latest customs duties are just a bargaining chip and not the start of a spiral into a tit-for-tat trade war that could arbitrarily affect any industry at any time. Headlines about supposedly saving US jobs are nice, they are no guarantee of anything and businesses can not afford to lay down on the job with so many surprises ahead.

If there is one thing companies hate more than taxes it is uncertainty. And to be sure unpredictability is a buzz killer. Sudden changes in a world with a globally connected supply chain are a shock and force companies to look for expensive workarounds. Add this to higher capital costs, and balance sheets will look strained. Ultimately, ordinary customers around the world will be hurt as these greater expenditures are passed on to them.

Even though tariffs are nothing new and are in place around the world, what makes this batch particularly irksome is the seeming randomness surrounding them. The EU perceives them as based on little economic understanding and even less on constructive discussions. Trump thinks they are merely fulfilling campaign promises by sending a simplistic "America First" message to Midwestern industrial workers.

But a new study by Germany's Center for International Economics at the Ifo Institute actually shows that there is indeed an imbalance in US-EU duties, finding that on average American import tariffs are indeed lower than those levied by the EU. Without reading detailed reports or studying charts, Trump really has a point. In fact, though monotonous the example he keeps emphasizing is textbook.

Americans pay 10 percent to send their cars to Europe, while Europeans only pay 2.5 percent for entry into the US. In a few other cases, the reverse is true. In spite of these undisputable facts and figures, both sides are caught up in the fuss and neither can see a clear way out that saves face, jobs and keeps goods moving.

Europeans want to put up even more trade barriers and take their case to the World Trade Organization (WTO); America becomes more stubborn by the day. In the end it doesn't really matter if these actions are legal or go against WTO rules — China can easily step in to fill the gap like it is doing in Iran.

What's more important are the aftertaste and the poisonous long-term effects of haphazard American diplomacy. To remain at the top of their game, both the European Union and all three Nafta countries need to bring realistic expectations, constructive ideas and nerves of steel to the negotiating table, since a world without trusted business partners or allies is a lonely place indeed.

Ahead of another tariff exemption deadline, Washington's European allies have been telling President Donald Trump that his trade threats are misguided and the real focus should be on China. Will he get the message? (30.05.2018)

US readies to impose steel and aluminum tariffs on the EU

Officials from both sides of the Atlantic were unable to reach a deal to avert tariffs two days before the exemption expires, the Wall Street Journal reported. The EU has threatened to punish US exports in return. (31.05.2018)

COVID: Israel to shut its borders to foreigners due to omicron variant 39m ago