Thirty years ago, American nuclear weapons were pulled out of Germany. But with President Donald Trump threatening to leave the INF treaty, a new arms race could flare up. Germany's peace activists are deeply concerned.

A thin layer of snow covers a forest clearing near the city of Heilbronn, where people are out walking their dogs. Back in 1985, this area in southwestern Germany was a high-security zone under control of the US Army. And the scene of a fatal accident with far-reaching consequences.

Larry Nichols served as a US solider at the site, where medium-range Pershing 2 nuclear missiles were stationed. He was under orders to keep their existence a secret. 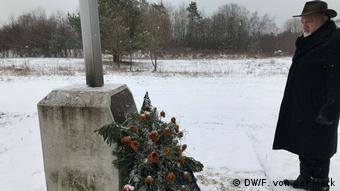 Nichols, here at the memorial in Heilbronn, believes the accident had a great political significance

"It was unbelievable that the people of Heilbronn were unaware of these weapons. It scared me knowing what was stationed here," Nichols remembers. And then, on January 11, 1985, an accident happened on the US base which changed everything.

On that Friday, US soldiers were working on one of the missiles when some rocket fuel caught fire and exploded. Three soldiers died in the accident and 16 were injured — some seriously.

The missile was not armed with a nuclear warhead at the time, but Nichols recalls that one of the soldiers thought a nuclear explosion had occurred. At the time, Nichols was no longer serving with the unit at the missile site, but he was still living in Heilbronn and was in touch with the soldiers stationed there.

"It was the height of the Cold War — the whole world was alarmed!" Until this fatal accident, most people in Heilbronn had had no idea that American nuclear weapons were stationed nearby.

Alfred and Susanne Huber, however, say they knew the rockets were at the site before this fateful day. Back then, they were active in the peace movement and had protested against nuclear weapons stationed in Germany at rallies in Heilbronn and huge protests in the West German capital, Bonn, which drew hundreds of thousands of people.

"Our demand was always: no threat to others and no danger to ourselves," says Alfred. And now that the issue is back in the news, Susanne says she is deeply concerned by the potential danger of a new arms race, calling it a "step backward."

'The treaty has served everybody rather well'

In the mid-1980s, fear was "widespread," Alfred Huber remembers. The fatal accident in January 1985 gave new impetus to the peace movement: the people of Heilbronn had had enough.

Konrad Wanner of the Heilbronn Peace Council says the accident marked a turning point, likening it to the 2011 Fukushima Daiichi nuclear power plant disaster. Suddenly, everyone in Heilbronn was opposed to nuclear weapons, not just those on the political left.

Susanne Huber says it was a "wake-up call," with the accident confirming just how dangerous matters were.

In fact, Nichols believes the events had great political significance and marked the "beginning of the end of the Cold War." Indeed, just two years later in December 1987, US President Ronald Reagan and Soviet leader Mikhail Gorbachev signed the Intermediate Range Nuclear Forces (INF) treaty, agreeing to eliminate intermediate-range and short-range missiles, like the Soviet SS-20 rockets and American Pershing 2 missiles. In 1988, all missiles stationed near Heilbronn were removed. 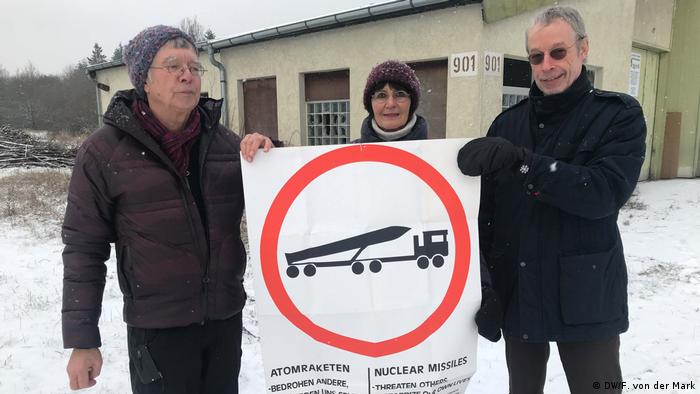 Read more: INF treaty: Would US dropout begin an arms race with China?

During the 1980s, Erhard Eppler of the Social Democrats was one of Germany's most prominent peace activists. While German society and politicians were deeply divided over German rearmament plans, Eppler was always strictly opposed. Today, he thinks protests against plans to place nuclear weapons in Germany would be even greater. At 92, he wouldn't hesitate to join in.

Back in the 1970s and '80s, Eppler and his fellow activists failed to prevent more than 100 Pershing 2 missiles from being stationed in Germany. When he learned that Reagan and Gorbachev had signed the INF treaty, he was elated and hoped the threat would be relegated to the history books.

"But apparently, that wasn't the end," says Eppler. "What we're experiencing right now is the product of [President] Donald Trump's utter irrationality. You can't tell what his intentions are."

The Trump administration is expected to announce in the coming days that it is suspending its compliance with the INF treaty. Trump has accused Russia of having violated the treaty by developing new ground-launched missiles with a range greater than 500 kilometers (310 miles).

Many in Germany now fear a new arms race, with the US seeking to counter this potential Russian threat with medium-range missiles of its own. Konrad Wanner of the Heilbronn Peace Council sees parallels to the 1970s: "Back then the Soviet Union was accused of building up its arsenal, and the US and NATO were forced to follow suit."

Isabell Steidel, a local member of the Green party, finds it difficult to imagine that weapons of mass destruction were once stationed on the outskirts of Heilbronn. The prospect of such weapons returning to German soil frightens her. But there is no doubt she would "use all peaceful means available to fight" against any plans to return nuclear weapons to Germany.

As the US is poised to pull out of the 1987 Intermediate-Range Nuclear Forces (INF) treaty, DW takes a closer look at the nuclear arms control agreement and its significance. (22.10.2018)

The treaty banning intermediate- and shorter-range missiles is beyond saving. The Cold War is back with a vengeance, and for Europe it's even colder and more dangerous than 30 years ago, writes Christian F. Trippe. (20.01.2019)

German Foreign Minister Heiko Maas said the "ball is now in Russia's court" to save the Cold War-era INF treaty. Europe fears an arms race could ensue if the United States leaves the treaty in early February. (24.01.2019)