The strategic rivalry between the US and China in the Asia Pacific could heat up if both sides develop new nuclear weapons. Chinese media are already calling for Beijing to expand its nuclear deterrence capability. 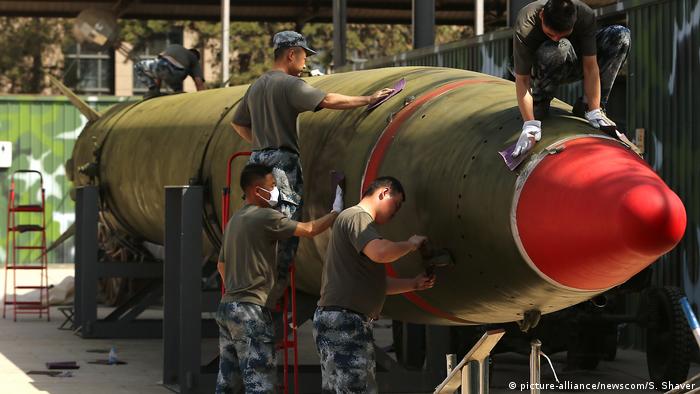 Last Saturday, US President Donald Trump announced during a speech that the US would be pulling out of the Intermediate-Range Nuclear Forces Treaty (INF) with Russia.

Although China is not included in the landmark treaty, which prohibits the development of intermediate-range, ground-based nuclear and conventional missiles, Beijing is clearly being put under pressure by the potential expansion of US military capacity.

On Monday, US National Security Advisor John Bolton arrived in Moscow and reiterated that the US would begin developing intermediate-range weapons capability if Russia and China continued developing and testing similar weapons.

Trump said that the move was a "threat" to "China and whoever else wants to play that game." This fresh bluster from Washington comes as the US and China are taking increasingly adversarial positions on trade and geopolitical influence in the Asia Pacific.

If the US were to drop out of the INF Treaty and begin producing new ground-based missiles, it could open up another — more dangerous — strategic front between Beijing and Washington.

"US-China relations have hit a level of tension that is engulfing every aspect of the bilateral relationship," Ryan Hass, a former US National Security Council (NSC) China director and expert at the Brooking Institution in Washington, told DW. "There are no issues that are immune from bilateral tensions." 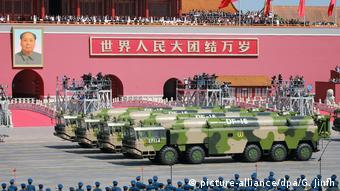 In April 2017, the former commander of US forces in the Pacific, Harry Harris, warned the US Senate that the US had "no comparable capability" to China's People's Liberation Army (PLA) rocket force because of US' adherence to the INF treaty.

"The PLA Rocket Force (PLARF) controls the largest and most diverse missile force in the world, with an inventory of more than 2,000 ballistic and cruise missiles," said Harris, adding that China was investing heavily in advanced missile technology and was organized for missions that could strike Taiwan and US military targets based on the island of Guam.

Harris added that 95 percent of PLARF missiles would violate the INF if China was included in the treaty.

"China has developed numerous ground and air launched missile systems that far outrange US systems," said Harris in his statement. "Constrained in part by our adherence to the INF treaty, the US has fallen behind in our ability to match the long-range fire capabilities of the new era."

In China, some observers have a more subdued opinion on China's capabilities vis-á-vis the US and its allies.

Shi Yinghong, a political scientist at Beijing's Renmin University, told DW that despite the INF treaty, the US maintains military superiority in the region.

"Both the US and its allies, such as Japan, can use air and sea-based medium-range missiles," said Shi.

The INF Treaty, signed between the US and Soviet Union in 1987, covers ground-launched ballistic and cruise missiles with ranges of between 500 and 5,500 kilometers (300 to 3,400 miles).

As the INF Treaty only covers land-based missiles, the US can maintain its current strategic naval advantage. Indeed, US warships equipped with intermediate-range rockets conduct regular patrols, including freedom of navigation maneuvers in China-claimed waters in the South China Sea.

However, whether from the sea or the ground, increased US missile capability has huge significance for China's regional security, which according to Chinese military experts, would require a response.

Yang Chengjun, a Chinese missile expert, told China's state-run Global Times that if the US dropped out of the INF it would have a "negative" impact on China's national security.

"To defend our core interests, we would have to push ahead with the modest development of medium-range missiles," Yang said.

China has been developing missiles since the beginning of the 1960s, and since then, it has continuously worked on its arsenal. Other countries like Pakistan, India, Israel, North Korea and Iran also produce medium-range missiles. 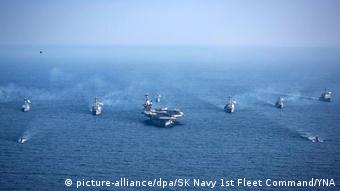 "This is the logic of an arms race," he said. "China will prioritize its nuclear deterrent capabilities, along with capacity for second-strike and retaliatory measures," added the Beijing-based expert.

"Our nuclear capacity is apparently developing slower than the increase in strategic risks. China needs to increase its nuclear deterrent capability to deal with this security risk."

It is unclear if China would be willing to accept a new missile deal with the US and Russia, considering the current size of its missile arsenal and strategic interests in Taiwan, the South China Sea and the East China Sea.

On Monday, a Chinese Foreign Ministry spokesperson said that the INF Treaty was "crucial" and that US withdrawal would have a "multilateral negative effect."

Lambsdorff: 'The treaty has served everybody rather well'

Pentagon chief Jim Mattis has issued a sharp criticism of Beijing's actions in the South China Sea. He accused China of "intimidation and coercion" by placing weapons on manmade islands in the disputed waterway. (02.06.2018)

Donald Trump's planned withdrawal from a key arms control treaty with Moscow has the handwriting of his hawkish national security advisor and could trigger a new arms race. Still, Europe bears part of the blame. (23.10.2018)