Prepare for a ′new Cold War′ without INF, Russia analyst says | Europe | News and current affairs from around the continent | DW | 22.10.2018

US President Trump did Russian President Putin a favor by leaving a treaty limiting some nuclear weapons, a Russia analyst tells DW. The world may need to prepare for a new Cold War. 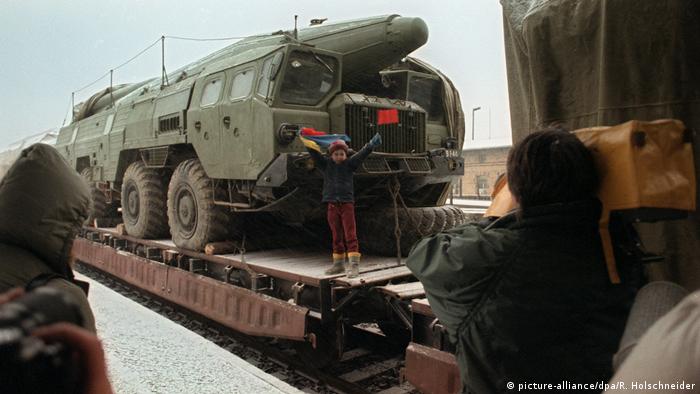 Pavel Felgenhauer is an independent Russian military and political analyst based in Moscow.

DW: How serious for global security is the US decision to scrap the treaty on intermediate-range nuclear forces (INF)? Is there a new arms race looming?

Pavel Felgenhauer: It's like returning to 1983. It seemed then that nuclear war could begin at any moment and actually it could. We're more or less back to square one on this.

These treaties [the INF and other nuclear disarmament treaties — ed.] happened at the end of the Cold War, and they gave a legal framework to the situation that came to be after the Cold War ended, after Communist rule collapsed in Russia and after the Warsaw Pact collapsed.

Now, we have a new Cold War, so the treaties that ended the previous one are irrelevant because they correspond to a totally different world situation. That means it was most likely inevitable that they would go down the drain.

The United States has hinted it would consider renegotiating the treaty if it expands to include China. Is that a realistic option?

Putin publicly spoke about that in October 2007, saying Russia will leave the treaty if America will not help make it international because Russia and America do not have these missiles — but China does. Now the same pretext is being used by the Americans with China.

Ninety percent of China's missiles fall in the INF bracket, so if they join the treaty they will have to destroy 90 percent of their missiles, which they have refused to do and will refuse to do. So that's not an option.

Does Russia have an interest in a new INF treaty?

In the immediate future, America has nothing to gain militarily from denouncing INF, but Russia has a lot to gain. Russia has developed and apparently deployed — though not many — cruise missiles based on modified launchers even though they were not tested by ground launchers. We have tested [missile modification] and we have deployed that and we are ready to deploy them as soon as INF is out of circulation. The Americans don't have anything to deploy that is prohibited by the treaty. In the future, the US could begin developing missiles if INF goes, but that will take years to be realized.

Russia already deploys the same type of missiles on frigates, cruisers, corvettes and submarines, but if the INF is gone we'll be able to deploy them on trucks, and a truck is much cheaper than a frigate and it's easier to hide. It makes a lot of sense for Russia to abandon the INF. Putin and Russian generals have been denouncing it since 2007.

US President Donald Trump did Russia and Russian President Vladimir Putin another favor by taking the blame for denouncing INF.

The US national security adviser's visit to Moscow comes after President Trump vowed to withdraw from the INF nuclear pact. Russia has warned that pulling out of the landmark treaty would be a "dangerous step." (22.10.2018)