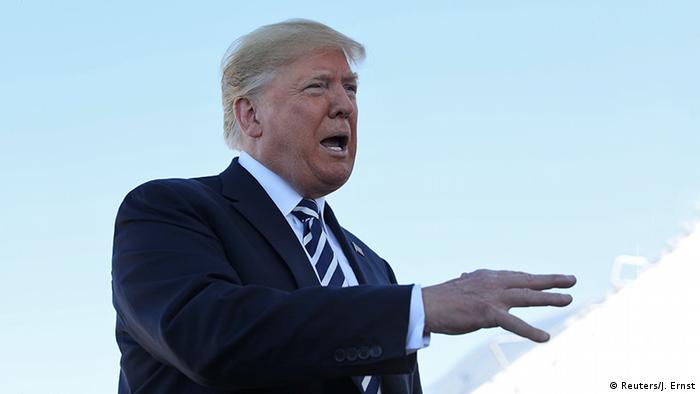 "[Russia] has been violating it for many years. I don't know why President Obama didn't negotiate or pull out," the president said following a campaign stop in Elko, Nevada. "We're not going to let them violate a nuclear agreement and go out and do weapons [while] we're not allowed to. We are going to terminate the agreement and then we are going to develop the weapons."

Trump went on to indicate that he would reconsider, provided Russia and China agreed to sign up to a fresh nuclear deal. China is not a party to the current pact.

The landmark agreement, signed by then-leaders Ronald Reagan and Mikhail Gorbachev, prohibits the US and Russia from possessing, producing or testing ground-launched cruise missiles with a range of 300 to 3,400 miles (500 to 5,500 kilometers).

Gorbachev slammed Trump's decision to pull out of the nuclear arms agreement, calling it a "mistake" and describing Trump's reasoning as "very strange."

"You absolutely must not tear up old agreements on disarmament," Gorbachev told Interfax news agency. "Is it really so hard to understand that dropping these agreements ... shows a lack of wisdom?"

Other Russian officials responded to Washington's impending withdrawal by accusing it of striving to become the world's only superpower.

"The main motive is a dream of a unipolar world. Will it come true? No," Moscow's state-run news agency RIA Novosti quoted a foreign ministry official as saying.

Russian Senator Alexei Pushkov took to Twitter to condemn the move as "the second powerful blow against the whole system of strategic stability in the world," with the first being Washington's 2001 withdrawal from the Anti-Ballistic Missile treaty.

"This would be a very dangerous step that, I'm sure, not only will not be comprehended by the international community but will provoke serious condemnation," he said.

'A world without nuclear weapons is not a dream'

Washington's allies in Europe appeared divided on Trump's decision, with the UK saying that it stood "absolutely resolute" with the US, and blamed Russia for violating the treaty for "many years."

Germany, on the other hand, voiced concern over the consequences the move will have on security in Europe.

German Foreign Minister Heiko Maas said that the US decision is "regrettable" and that it "raises difficult questions for us and Europe."

He added that the over 30-year-old treaty is "an important pillar of our European security architecture."

In a separate statement, the German government also emphasized that despite repeatedly urging Moscow to clear up allegations that it has violated the treaty, Russia has not yet done so. The consequences of the US decision are currently being discussed by NATO partners.

Trump's announcement comes just as US National Security Adviser John Bolton is set to begin a series of visits to Russia, Azerbaijan, Armenia and Georgia.

In Moscow, Bolton is expected to begin preparations for a second summit between Trump and Russian President Vladimir Putin. Although no date has yet been announced, a meeting is expected in the near future. That could be in November, when the two leaders will be in Paris for a commemoration ceremony marking the end of World War I. Another possibility would be around the time of the next G20 leaders' summit in Buenos Aires, Argentina, slated to begin November 30.

Tensions between Russia and the US remain strained over the Ukraine crisis, the conflict in Syria and allegations of Russian meddling in the 2016 US presidential vote and the upcoming midterm elections.