Russian President Vladimir Putin said that if the US quits the treaty and begins building mid-range nuclear missiles, Russia would do the same. The Kremlin dismissed US claims that Russia is violating the INF treaty. 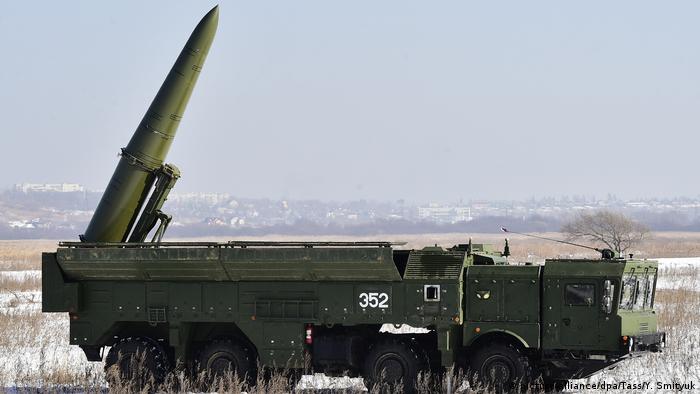 Russian President Vladimir Putin said on Wednesday that if the US withdraws from the Intermediate-Range Nuclear Forces (INF) treaty and begins making previously banned mid-range missiles, Russia would also make the same type of weapon.

"What is our side's response? It's simple. We will do the same," Putin said, according to a Kremlin transcript.

The Kremlin also dismissed US claims that Russia is violating the major Cold War treaty that limits mid-range nuclear arms, from which Washington is planning to withdraw.

"No proof has been produced to support this American position," Zakharova said, describing the treaty as a "cornerstone of global stability and international security."

At a meeting with fellow NATO foreign ministers on Tuesday, Pompeo said that the US would withdraw from the deal within 60 days if Moscow does not dismantle missiles that Washington says violate it. NATO said it was now "up to Russia" to save the treaty.

On Wednesday, NATO Secretary General Jens Stoltenberg said that the trans-Atlantic alliance is preparing "for a world without the treaty," saying that Russia has "a last chance" to come into compliance.

In October, President Donald Trump sparked global concern by declaring the United States would pull out of the treaty and build up America's nuclear stockpile "until people come to their senses".

However, Trump on Monday said he wanted to talk with his Chinese and Russian counterparts Xi Jinping and Putin "to head off a major and uncontrollable arms race."

In 2007, Putin had said it would be "difficult" for Russia to remain in the 1987 US-Russian Intermediate-Range Nuclear Forces Treaty (INF) unless it was expanded to include other countries.

The Trump administration has accused Russia of "cheating" on the terms of a treaty on nuclear missiles. Europe could face security concerns if Washington carries through on a threat to withdraw from the pact. (04.12.2018)

The strategic rivalry between the US and China in the Asia Pacific could heat up if both sides develop new nuclear weapons. Chinese media are already calling for Beijing to expand its nuclear deterrence capability. (23.10.2018)