The German chancellor called on attendees of the World Economic Forum in Davos to remain committed to global institutions but to be open to compromise. She also said that Germany's recent political instability was over.

German Chancellor Angela Merkel defended the importance of multilateral institutions while calling for their reform in a speech made Wednesday at the World Economic Forum (WEF) in Davos.

"We need a clear commitment to multilateralism. Anything else will only end in misery," Merkel said, highlighting what she called "the fragmentation of the multilateral world."

She described a "multitude of disturbances and insecurities in the multilateral system" as contributing to the reduced economic growth projections around the world.

The annual meeting of leaders in business and politics comes at a time of heightened fears of a global economic slowdown due to trade wars, the lack of clarity over Brexit, climate change and other potential issues.

Merkel said that the West must counter growing fragmentation by being ready to make compromises. These days some think it's best "if everyone thinks only about himself," she said. "I have doubts about that." She highlighted the free trade deal between the EU and Japan that will go into effect on February 1 as an example of global cooperation.

She also stressed the need for close relations with the United Kingdom after its scheduled departure from the EU on March 29.

Merkel mentioned rapid global digitization and its effect on the future of work and data security, and said new global institutions were needed to address such changes. "I still have yet to see any global architecture that deals with these questions," she said.

She also warned that some of the triggers of the 2007/2008 financial crisis were still present in the banking sector. Global financial institutions such as the International Monetary Fund and the World Bank must be reformed to restore confidence, but they should not be downgraded, Merkel added.

The chancellor has spoken at Davos in prior years, but 2019's appearance follows a particularly rocky domestic political period.

Following drawn-out talks to form a coalition government, the result of her Christian Democrats losing ground in 2017's elections, Merkel struggled to keep her coalition together in mid-2018 as her allies argued over migration policy. Then in December she stepped down as the head of her conservative CDU party, also announcing that this would be her last term as chancellor. 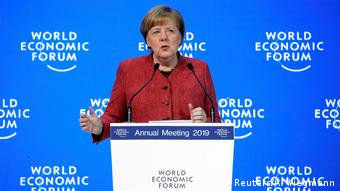 In Davos, Merkel sought reassure listeners that Germany's government was on solid ground. "I can say to you that Germany once again has a stable government and we are willing to work following some early difficulties."

In speaking on Germany's economic situation, she addressed topics including the need for future infrastructure investment, digitization and its uneven development in Germany, and demographic change.

Japanese Prime Minister Shinzo Abe will also deliver a speech later on Wednesday. The newly sworn-in president of Brazil, populist Jair  Bolsonaro, gave the first keynote on Tuesday, filling in for US President Donald Trump, whose visit was called off as a result of the US government shutdown. Bolsonaro has promised to open up Brazil to greater foreign investment and increase privatization.

The annual Davos summit closes its doors on Friday, January 25.

Globalization needs a serious update; otherwise, we're all doomed. So says the World Economic Forum — which brought us the earlier, defective versions. (22.01.2019)