The world's largest free trade agreement — one between the EU and Japan — is expected to go into force in February. Nearly all duties will be removed. 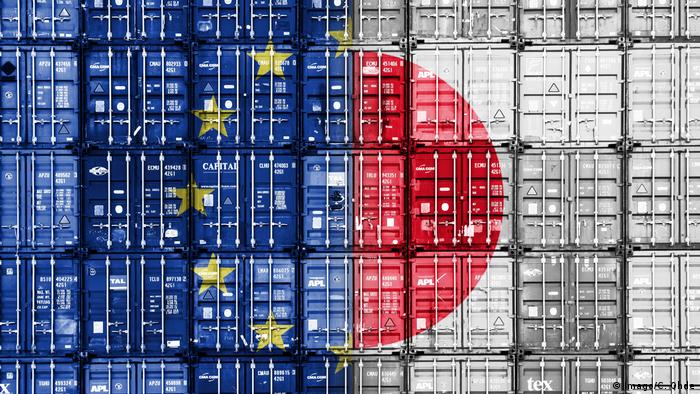 The European Parliament on Wednesday approved a free trade agreement between Japan and the EU, covering 635 million people and almost one-third of the world's economy.

Dubbed the world's largest free trade agreement, the EU-Japan Economic Partnership Agreement will remove duties on almost all agricultural and industrial products as well as open up the service sector and procurement. It also moves to eliminate non-tariff barriers to trade.

"Our economic partnership with Japan — the biggest trade zone ever negotiated — is now very close to becoming a reality. This will bring clear benefits to our companies, farmers, service providers and others," said Cecilia Malmström, EU Commissioner for Trade.

European lawmakers voted 474 in favor and 152 against with 40 abstentions. Japan's parliament have already approved the agreement.

EU member states must still approve the pact, but the European Commission said they expect the agreement with the world's third-largest economy to enter into force in February 2019.

EU businesses export €58 billion ($66 billion) in goods and €28 billion in services to Japan every year.

The agreement includes standards of labor, safety, environment, consumer protection and, for the first time, a specific commitment to the Paris climate agreement.

The EU and Japan have signed an unprecedented free trade agreement which will create one of the world's largest trading blocs. European Council President Donald Tusk says it is a "clear message" against protectionism. (17.07.2018)

At a finance ministers' summit, the group issued a statement calling for dialogue over economy-killing trade disputes. The US reportedly tried to woo the EU and Japan for leverage over China. (22.07.2018)