The EU and Japan have signed an unprecedented free trade agreement which will create one of the world's largest trading blocs. European Council President Donald Tusk says it is a "clear message" against protectionism. 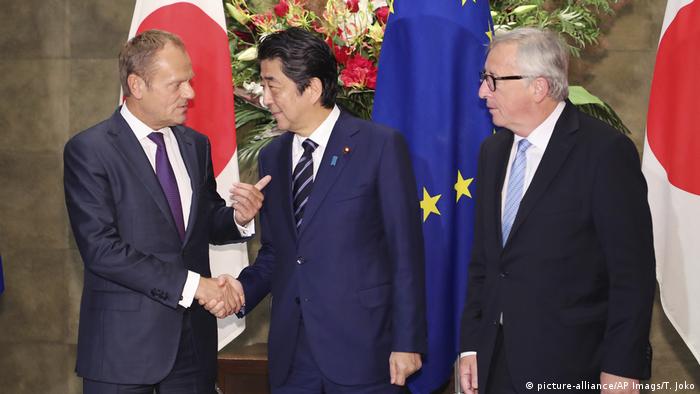 The European Union (EU) and Japan have signed a trade deal that promises to eliminate 99 percent of tariffs that cost businesses in the EU and Japan nearly €1 billion ($1.17 billion) annually.

Japanese Prime Minister Shinzo Abe said the deal "shows the world the unshaken political will of Japan and the EU to lead the world as the champions of free trade at a time when protectionism has spread."

According to the European Commission, the EU-Japan "Economic Partnership Agreement" (EPA) is the largest trade deal ever negotiated by the EU and will create a trade zone covering 600 million people and nearly a third of global GDP.

Abe met with European Commission President Jean-Claude Juncker and European Council President Donald Tusk in Tokyo on Tuesday to sign the EPA at the 25th EU-Japan Summit. The agreement was supposed to have been signed during an EU-Japan summit in Brussels last Wednesday, but the meeting was canceled by Abe due to the recent flooding disaster in Japan.

The result of four years of negotiation, the EPA was finalized in late 2017 and is expected to come into force by the end of the current mandate of the European Commission in autumn 2019. The EU has called the agreement "highly ambitious and comprehensive." The total trade volume of goods and services between the EU and Japan is €86 billion.

After signing the deal, Tusk said: "We are sending a clear message that we stand together against protectionism."

"Together we are making, by signing this agreement, a statement about free and fair trade, we are showing that we are stronger and better off when we work together," added Juncker.

Could Japan get pulled into a trade war with the US?

"The EU and Japan share a common vision for an open and rules-based world economy that guarantees the highest standards. We are sending a message to other countries about the importance of free and fair trade, and of shaping globalization," EU Trade Commissioner Cecilia Malmström said after the agreement was finalized in 2017.

EU agricultural exports are expected to experience a boost from the EPA, as Japanese tariffs on cheese, wine and pork will be eliminated. According to the Commission, exports of processed foods could increase by up to 180 percent.

The Thünen Institute, a German agriculture think tank, said it expects a heavy increase in pork and poultry exports from the EU to Japan.

The EPA will also open the Japanese market for more EU-based services and give EU developers access to Japanese public infrastructure projects, such as railroads. The EU estimates that 600,000 jobs in Europe are related to trade with Japan.

The agreement is also expected to increase chemical exports from the EU to Japan by 22 percent and mechanical engineering shipments by 16 percent. The Japanese computer, electric and automobile industries are all expected to benefit from the deal. For example, EU import tariffs on Japanese cars, currently at 10 percent, will gradually be reduced to zero.

"The free trade agreement will infuse a new dynamic for business relations on both sides," said Marcus Schürmann, director of the German Chamber of Commerce in Japan (AHK Japan).

Since last year, AHK Japan has been observing growing interest from German companies that want to enter the Japanese market, either through partners or with their own subsidiaries in Japan.

This includes sectors that were previously closed for German investment along with well-established sectors for German business like engineering, automobiles, pharmaceuticals and chemical production.

The AHK estimates that there are around 12,000 German companies currently doing business in Japan. "This number could grow by double-digit percentage points in the next few years," said Schürmann.

Why no one can win a trade war

A signal in favor of free trade

The EU and Japan also see the signing of the deal as a signal against US President Donald Trump's protectionist trade policies. Prime minister Abe views free trade as a driver of Japanese economic growth.

"Japan is pressing on the accelerator of globalization," Schürmann said, adding that in response to growing protectionist tendencies, the East Asian nation is pushing for more instead of less global cooperation.

In fact, Japan was the main driver behind the completion of the revised Trans-Pacific Partnership (TPP) free trade agreement this spring, after Trump pulled the US out of the deal, agreed upon by his predecessor Barack Obama's administration. After that move, the EU and Japan also accelerated their negotiations.

The national and local authorities retain their prerogative to keep public services in public hands, the EC stressed, adding that the agreement will not lead to deregulation and privatization of water and sanitation. Rather, Japan and the EU want to meet the highest standards of work, safety, environmental and consumer protection, the EC said.

European member states have given the go-ahead for a free trade deal with Japan, the world's third-largest economy. Brussels said the agreement was sending "a very powerful signal against protectionism." (06.07.2018)

11 Pacific nations to sign regional trade deal — without US

Japan has taken the lead in forging the agreement that has evolved from the Trans-Pacific Partnership free trade deal after Washington pulled out, but the US would be welcomed in the future, say experts. (07.03.2018)