11 Pacific nations to sign regional trade deal — without US

Japan has taken the lead in forging the agreement that has evolved from the Trans-Pacific Partnership free trade deal after Washington pulled out, but the US would be welcomed in the future, say experts. 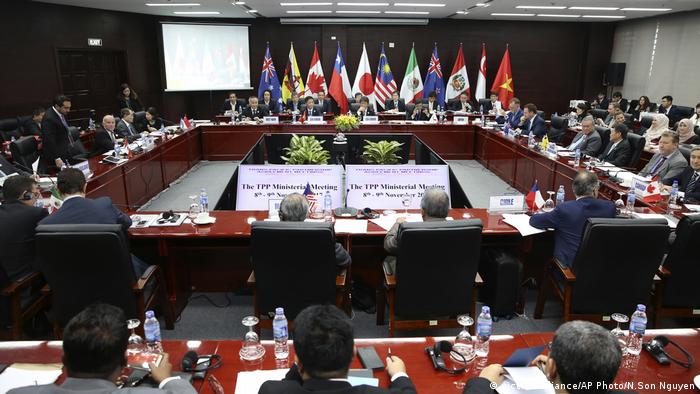 Representatives of 11 nations are gathering in the Chilean capital of Santiago on Thursday to sign a regional free trade agreement that has been strongly championed by Japan since the United States decided to withdraw from the pact shortly after Donald Trump entered the White House.

After Washington's exit — a decision that some have described as possibly the turning point in US global leadership — Tokyo took up the baton and most of 2017 was spent reaching consensus on the Comprehensive and Progressive Agreement for Trans-Pacific Partnership (CPATPP) between the remaining states on a broad range of trade and investment issues.

Analysts suggest, however, that the US would be welcomed with open arms should Trump or the administration that succeeds him indicate a willingness to once again be involved. And they add that as well as serving as a powerful trade deal, CPATPP is also an important security arrangement. And that is a critically important component for Japan as it warily watches the economic and military growth of its great regional rival, China.

"Japan is the largest economy among the remaining member states and Tokyo very badly wanted this agreement to happen," said Jeff Kingston, director of Asian Studies at the Japan campus of Temple University. "And that was as much for the geopolitical symbolism as the economic benefits it can bring."

The deal is "ambitious," Kingston said, despite the absence of the US, although it is clear the door has been left open for Washington by the signatory nations.

"They want to make sure that America can join down the line and that is primarily due to the security issues that are at play in the region," he told DW. "Neither China nor North Korea is going away any time soon and the dangers that they pose are arguably only going to get bigger and more complex."

The immediate problem for the 11 nations who will form the CPATPP is that Trump appears intent on a confrontational approach to international trade, as demonstrated by his administration's plans for imposing tariffs on steel and other imports to the US, which fly in the face of the very concept of free trade, Kingston pointed out.

And that is despite Trump suggesting recently that Washington might opt to rejoin the trade bloc if the new terms were more advantageous for the US.

For the foreseeable future, however, CPATPP stands as what the nations have agreed — and for some, the new version is more beneficial than the agreement that included the US. That includes the intellectual property provisions that President Barack Obama's government insisted on and that would have arguably worked in favor of big US businesses at the expense of consumers in the region.

According to the terms of the deal, the 11 member states — Australia, Brunei, Canada, Chile, Japan, Mexico, Malaysia, New Zealand, Peru, Singapore and Vietnam — will still have veto power over others joining, meaning that larger countries, such as China and India, can still be excluded even if they meet membership criteria.

The new agreement includes the terms "corporate social responsibility," "indigenous rights," "inclusive trade" and "traditional knowledge" in its preamble, suggesting that it aims to be a more inclusive agreement than the original TPP.

"It is clear that Japan and many of the others still want the US to participate in the future, but I do not see this as a stop-gap agreement until that comes to pass," said Jun Okumura, a political analyst at the Meiji Institute for Global Affairs.

The pact will, he said, make significant improvements in free trade between member states — although there are hurdles that will need to be overcome in the ratification process in individual nations that could hold up the implementation.

"This is a huge agreement in its own right although it will not be welcomed in all sectors in all the countries that have signed it, in part because some of the provisions are pretty invasive for developing countries," Okumura emphasized, adding that it will also effectively be in competition with the Regional Comprehensive Economic Partnership (RCEP), a similar economic alliance that is being spearheaded by China.

"Japan's ruling Liberal Democratic Party has had to overcome some pretty stiff opposition to the CPTPP deal at home," Okumura said, pointing to sectors such as agriculture, which has been carefully protected by previous LDP governments and, in turn, has served as a strong supporter of the party during elections.

"So for the LDP to overcome those objections and to push ahead with the deal just shows how much importance they place on this agreement," he added.

"It is, of course, a trade and investment pact, but it equally contains a very important national security aspect that is designed to reinforce the alliance with the US just as soon as Washington is open to returning."

Vietnam is hosting this year's Asia Pacific Economic Cooperation (APEC) summit, which gives it an opportunity to tout the benefits of global free trade. But convincing protectionists like Trump remains an uphill task. (09.11.2017)