At a time of heightened uncertainty in the global economic environment, leaders of Europe and China are meeting to ponder ways to counter the fallout from US President Trump's "America First" policies. 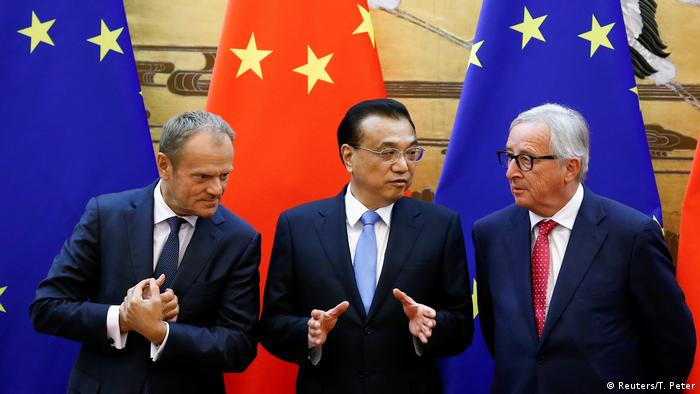 US President Donald Trump's attacks on the international trading system, by imposing tariffs and engaging in virulent anti-trade rhetoric, have left America's commercial partners worldwide scrambling for an appropriate response.

Leaders of the European Union and China, the US's most significant trading partners, were meeting in Beijing on Monday for their annual EU-China summit, with global and bilateral trade and investment relations topping the agenda.

"It is a common duty of Europe and China, America and Russia, not to destroy this (world) order, but to improve it. Not to start trade wars...but to bravely and responsibly reform the rules-based international order," European Council President Donald Tusk said in Beijing. He spoke after a meeting with Chinese Premier Li Keqiang that was also attended by European Commission President Jean-Claude Juncker.

Li told reporters it was up to China and the US to "work things out."

"China does not want a trade war with the US. Noone emerges as a winner from a trade war," he said.

The talks between EU and Chinese officials were to focus on a raft of global economic and security challenges, including the Iran nuclear deal, the situation in Syria and climate change.

Given the current escalation in trade tensions by the imposition of tit-for-tat tariffs, both sides were expected to express their support for a rules-based international trading system under the auspices of the World Trade Organization (WTO).

Trump's imposition of tariffs on steel and aluminum as well as his threats of new duties on the automotive industry have unnerved Washington's trading partners throughout Europe, particularly Germany.

Likewise, China has been in the crosshairs of Trump's tariff threats for months. The US administration recently imposed 25 percent tariffs on 818 Chinese goods, worth approximately $34 billion (€29.1 billion), which came into force early this month. A second round of tariffs on products worth $16 billion is under review and could soon be added to the US measures.

The decisions prompted an immediate response from Beijing, with authorities there announcing they would hit back dollar for dollar.

Following Beijing's retaliation, Trump threatened to impose 10 percent tariffs on $200 billion worth of Chinese imports. China has since accused the US of expanding the scope of the trade conflict and stressed that it would not back down from a trade fight.

Against this backdrop, some say Beijing hopes to join forces with Brussels to present a unified front against Washington's unilateral "America First" policies. Together, they would have significant economic clout, as China and the EU account for more than a third of global economic output and almost half of global trade.

Despite the two sides finding themselves on the same page with regard to tariffs, observers say it's unlikely that Brussels and Beijing will form an alliance against Washington. The summit this time is merely expected to produce a modest communique, affirming support for a multilateral trading system, but nothing more.

That's because the EU and China have significant disagreements when it comes to issues like market access and intellectual property rights.

A recent survey conducted by the EU Chamber of Commerce in China concluded that China is "one of the most restrictive economies in the world."

European and American companies operating in the Asian giant have long complained that they face an array of regulatory issues, hindering a level playing field on the Chinese market and their ability to freely do business there.

"Regulatory issues range from ambiguous rules to discretionary enforcement of policy to specific problems like access to licenses and financing or equal access to public procurement bids," Mats Harborn, president of the European Union Chamber of Commerce in China, told DW.

"All of these challenges are especially acute for small and medium-sized enterprises, as they lack the resources and manpower to navigate these problems as easily as their larger counterparts," he added.

Another bone of contention is intellectual property, with the Chinese government accused of strong-arming foreign companies into sharing and disclosing their technologies by, for instance, entering into partnerships with local companies.

Beijing's "Made in China 2025" initiative, an ambitious plan to close the Asian giant's technology gap with the West, is also viewed as exploitative by many in the EU. The initiative seeks to turn China from being the world's factory into a global technology leader, including in biotech, robotics, aerospace and clean-energy cars.

European officials and business executives routinely express their concerns and dissatisfaction with Beijing's moves to lay its hands on new technologies.

Apart from trade and market access, the two sides have recently clashed over the Eurasian connectivity vision of China's massive Belt and Road Initiative (BRI), an ambitious $1 trillion infrastructure project that aims to bolster China's trade and investment links with economies in Asia, Africa and Europe.

Furthermore, some in Brussels view Beijing's strengthening ties to Central and Eastern European countries with suspicion, concerned that China's growing leverage over these countries could pose a threat to EU unity, norms and values.

"Europeans have certain concerns when it comes to their economic ties with China. Beijing's economic power and competition from China are growing. In this context, as populism in Europe rises, so do concerns about China," Ding Chun, director of the Center for European Studies at Fudan University in Shanghai, told DW. "Europe and China are the world's largest and third-largest economies. So dissatisfaction with and complaints about their policies and practices are completely normal," the expert added.

The two sides have their respective demands, he underlined, pointing out that China believes it should receive Market Economy Status (MES), which would allow it to enjoy the same market status as the EU and the US when it comes to anti-dumping investigations before the WTO.

"I hope that China and the EU can make concrete progress in the area of economic cooperation, for example by pressing ahead with negotiations for a comprehensive investment agreement," Chun said. "Such an agreement benefits both sides, even the whole world. That would be a contribution to the fight against protectionism."

Beijing and Brussels are in the process of negotiating a bilateral investment treaty, which is intended to provide more legal protection and market access for investors on both sides. During the last high-level dialogue in late June, both sides agreed to inject "political impetus" to speed up the process.

"The European Chamber is looking forward to seeing a well-negotiated agreement that addresses market concerns in all sectors and creates a more transparent and stable regulatory business environment," said Harborn.

"The ball is in China's court and it is imperative that the government show that it is moving towards a decisive stage of negotiations before the end of 2018. Doing so would send a clear signal that China is ready to deliver on its promises on market opening. If there are continued delays, however, it will have negative effects on both China and the EU."

Government consultations between Germany and China in Berlin on Monday aim to send a signal of closer bilateral cooperation in light of a worsened trade spat with the US. But some hurdles have yet to be overcome. (09.07.2018)