Chinese officials condemned US punitive tariffs, threatening that it could launch "the biggest trade war in history." Beijing plans to bring the trade dispute to the World Trade Organization. 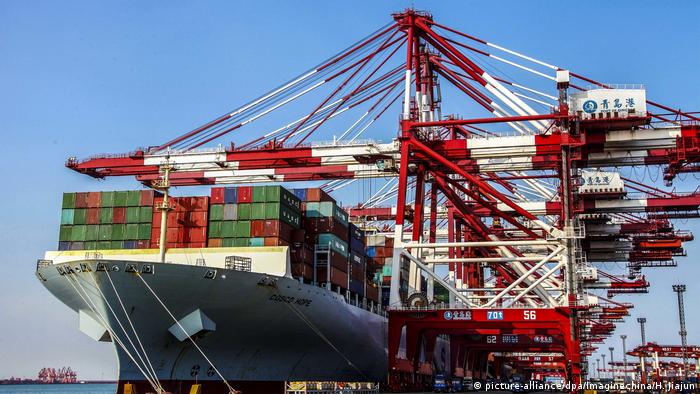 The Chinese government said that it was "forced to counterattack" against US punitive tariffs on its imports, which went into effect early on Friday.

A statement from the Chinese Commerce Ministry denounced US actions as "a violation of world trade rules" and warned that the current dispute between both countries was launching the "biggest trade war in history."

Speaking hours after the tit-for-tat duties went into effect, Chinese Premier Li Keqiang said no one would emerge a winner from a trade war.

"Trade war is never a solution," Li said at a news briefing with Bulgarian Prime Minister Boyko Borissov in Sofia.

"China would never start a trade war but if any party resorts to an increase of tariffs then China will take measures in response to protect development interests."

The long-threatened tariffs went into effect on Friday as months of dialogue between the world's two largest economies failed to reach a solution or lessen Washington's outrage over its current trade imbalance with the Asian giant.

The US trade deficit in goods with China stood at a record $375 billion in 2017.

China to appeal at WTO

Lu Kang, spokesman for the Chinese Foreign Ministry, confirmed to news agency AFP that his government's retaliatory tariffs were already in effect. "After the US activated its tariff measures against China, China's measures against the US took effect immediately," Lu Kang said, though he did not elaborate on the details of the measures.

Previously, Beijing had vowed to impose counter-tariffs of 25 percent would apply on US agricultural and other products worth $34 billion.

China said it plans to inform the World Trade Organization about the "situation" and work with other countries to defend the multilateral system of free trade, the ministry said.

"It’s already affecting workers who are being laid off as a result of decisions, especially in America, to move out of the country and produce elsewhere, given the tariffs. It’s having an impact on businesses that are not making capital investment decisions because of the uncertainty of the situation," she said.

"But let’s not forget: tariffs are taxes. Taxes that the consumer will have to pay. It will make — it is making already — American consumers pay more for the goods they buy. And it’s making American companies less competitive," Gonzalez said.

Reuters news agency reported that as of Friday morning, when tariffs took effect, some major Chinese ports had delayed clearing goods from the US. If that were to persist, it could potentially disrupt imports of key products such as pork and soybeans.

An official at a company in Shanghai that handles customs clearance for importers said to Reuters that the port of Shanghai is said to have put on hold clearing some US imports through customs.

Why higher US tariffs on car imports would backfire

A leading advocacy group for the auto industry has said consumers in the US would suffer if higher tariffs on imported cars from the EU were to be imposed. Washington has long threatened such a move. (27.06.2018)

'This conflict is already having an impact'

WTO: is the free-trade advocate facing a deadlock?