Why higher US tariffs on car imports would backfire | Business | Economy and finance news from a German perspective | DW | 27.06.2018

Why higher US tariffs on car imports would backfire

A leading advocacy group for the auto industry has said consumers in the US would suffer if higher tariffs on imported cars from the EU were to be imposed. Washington has long threatened such a move. 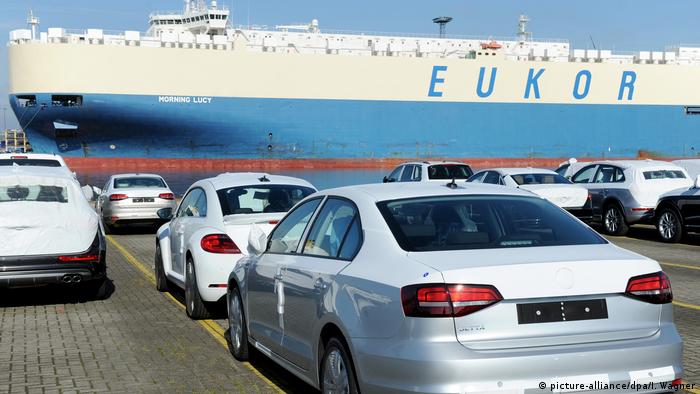 Having slapped higher duties on EU steel and aluminum already, US President Donald Trump is now looking to curb successful European car imports, which have long been a thorn in his side against the general backdrop of a massive US trade deficit with the bloc and Germany in particular.

"We are finishing our study on cars from the EU," Trump tweeted earlier this week, saying the measures that his administration will take to rectify the imbalance will see things "evening out" fairly soon.

The American president has threatened to impose a tariff of at least 20 percent on all imports of EU-assembled vehicles, a month after Washington launched an investigation into whether auto imports posed a national security threat.

The US Alliance of Automobile Manufacturers hopes these higher tariffs will never materialize. The advocacy group, which represents 70 percent of all car and light truck sales in the US including manufacturers BMW and Volkswagen, warned that a 25-percent duty on imported vehicles would cost American consumers some $5,800 (€4,988) per vehicle.

"Nationwide, this tariff would hit US consumers with a tax of nearly $45 billion, based on 2017 auto sales," spokeswoman Gloria Bergquist said in a statement. "This would largely cancel out the benefits of the tax cuts."

Consumers in the US would also face higher costs of imported auto parts when buying vehicles from both domestic and foreign carmakers.

As the US and the EU are mired in a spiral of trade restrictions and countermeasures, the EU's executive arm, the European Commission, reported a steep rise in protectionism in 2017.

In its annual report on trade and investment barriers, Brussels said "protectionism is self-defeating and destructive, and it's on the rise," while failing to mention the raft of measures the EU itself has kept in place to protect its economy.

Among the trade barriers identified in the European Commission's latest report were unnecessary safety standards, administrative hurdles and import ceilings imposed by nations around the globe to make it harder to export to these markets.