The trade conflict between the US and the EU escalates: After Trump's threat to slap higher duties on auto imports from the bloc, the EU warns it could sanction US exports worth billions. 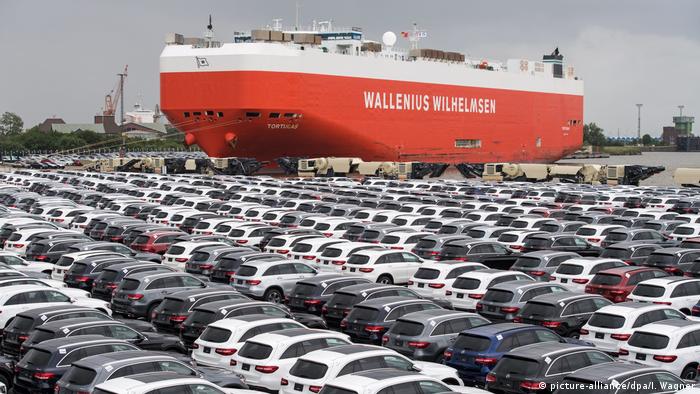 The European Union warned on Monday that up to $294 billion (€252 billion) worth of US exports could become the target of countermeasures if President Donald Trump remained serious about his threat to impose a 20-percent tariff on cars imported from the EU.

In a letter to US authorities, the European Commission, which handles trade policy for the bloc's 28 members, said "up to $294 billion of US exports ... could be subject to countermeasures across sectors of the US economy."

This was the equivalent to 19 percent of US total exports in 2017, it added.

The EU executive underlined that European car companies were important contributors to the US economy and "well established" there. "In 2017, US-based EU companies produced close to 2.9 million automobiles, which accounted for 26 percent of total US production," it said.

Pointing to sites in South Carolina, Alabama, Mississippi and Tennessee — southern US states known for their unwavering support for Trump — the EU said its companies supported 120,000 direct and indirect US jobs in plants across the country.

Trump's threat was the latest salvo in an escalating trade spat that saw the European Union slap duties on US-made jeans and Harley Davidson motorcycles in a tit-for-tat response to US tariffs on European steel and aluminium exports. The US president has also singled out the Europeans as a problem as great for the US on trade as China. Auto imports are a particular thorn in his side.

Slovakia to feel most pain

The specter of US tariffs that sent shares in Fiat Chrysler, Daimler and BMW tumbling on European stock exchanges also spooked Slovakia's automotive sector. As the world's largest per capita car producer, Slovakia stands to be hit hardest if US President Donald Trump makes good on his threat, analysts say.

It boasts Germany's Volkswagen — which is Slovakia's biggest private-sector employer — France's PSA and South Korean Kia along with more than 300 automotive supply companies. All told, they generate over 300,000 jobs in the eurozone country of 5.4 million inhabitants.

This makes Slovakia the EU's leading car and car part exporter to the United States in terms of share of GDP — and the most vulnerable to tariffs. According to Slovak Institute for Financial Policy (IFP) calculations, a 25-percent tariff on cars could cost Slovakia approximately 90 million euros. 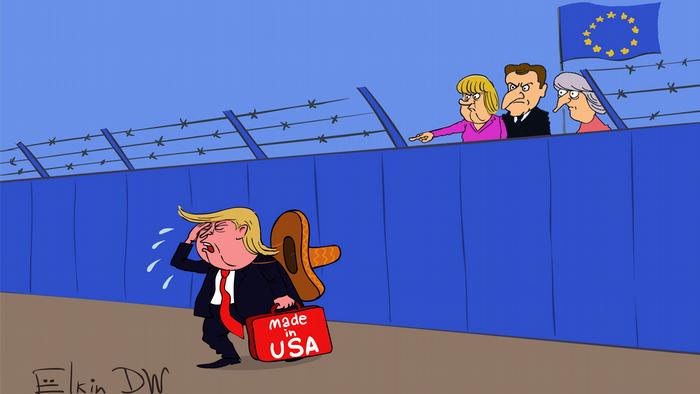 As the only Slovakia-based carmaker that exports directly to the US, Volkswagen — and its many local suppliers — will suffer the most should US tariffs be slapped on the high-end Touareg, Audi Q7 and Porsche Cayenne models produced at its Bratislava plant.

In a letter to US Commerce Secretary Wilbur Ross, German car manufacturer BMW has urged the US not to introduce tariffs on foreign cars.

"The domestic manufacture of automobiles has no apparent correlation with US national security," the company wrote in a statement, submitted as part of an US Department of Commerce investigation into whether car imports pose a threat to the country's security.

Ross claimed that Trump had far-reaching, "unilateral" power to impose and adjust tariffs and quotas by invoking a rarely used 1962 law authorizing presidential action against imports that undermine national security.

Also read: US trade with the EU, Germany in numbers

BMW said it "appears that the purpose of threatening to impose these duties is to achieve certain economic objectives, under the theory that enhancing US economic competitiveness will enhance US national security."

BMW's largest manufacturing base in the world is in Spartanburg, South Carolina, where SUVs from the company's X line are built. With production capacity currently being expanded to 450,000 cars, the Spartanburg factory is responsible for around 36,000 jobs, including subcontractors.

Last week, the European Commission announced that its president, Jean-Claude Juncker, would travel to Washington at the end of July to discuss EU-US trade tensions with US President Donald Trump.

Among other things, the aim of the meeting was to discuss tariffs on the automotive sector, a spokesperson said, with Trump mulling higher tariffs on EU vehicle imports.

Canada imposes tariffs on US goods

Canada imposes tariffs on US goods

As the US seeks to curb Chinese cybertheft and forced technology transfers, DW asks how vital it is that the US preserve its tech dominance? At issue is Beijing's state-backed industrial policy "Made In China 2025." (26.06.2018)