The iconic American motorbike manufacturer will shift some of its production out of the US. It expects rising costs from higher European tariffs imposed on Friday in retaliation against Donald Trump's metals tariffs. 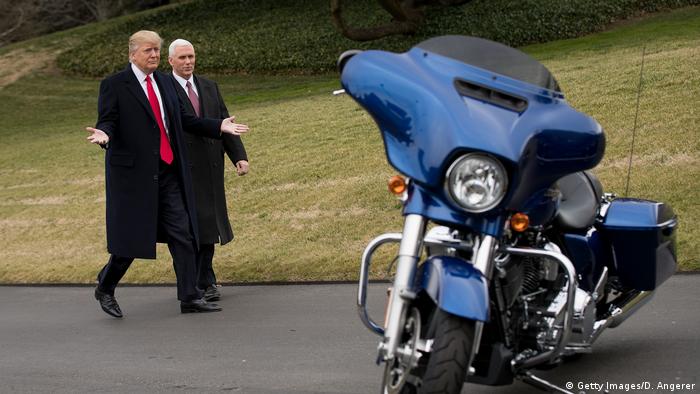 In a regulatory filing on Monday, Harley-Davidson said each of its motorcycles shipped to the European Union would cost about $2,200 (€1,880) more after the bloc raised its levies on imported US bikes to 31 percent from 6 percent on June 22.

This would cost the company about $90 million to $100 million annually, the manufacturer said, adding that it was striving to absorb extra costs rather than pass them on to customers in the medium-term.

"Harley-Davidson believes the tremendous cost increase, if passed onto its dealers and retail customers, would have an immediate and lasting detrimental impact to its business in the region," it said in the filing.

In order to avoid the impact of higher EU tariffs on its sales, the company also announced that it would be "implementing a plan to shift production of motorcycles for EU destinations from the US to its international facilities."

On Friday, the EU began rolling out tariffs worth $3.4 billion on American imports like bourbon, peanut butter, orange juice and Harley-Davidson motorbikes. The measure came in response to new US duties of 25 percent on steel and 10 percent on aluminum imposed by the Trump administration.

The Milwaukee-based company sold almost 40,000 motorcycles in the EU last year, generating revenue second only to the United States.

US President Donald Trump has repeatedly used the company as an example of how European import tariffs hurt US producers. Yet Harley-Davidson had previously warned that the escalating tariffs spat would lead to an even higher burden for the company.

On Monday, the company tried to smooth troubled waters, saying its shift of production abroad would not dent its "strong commitment to US-based manufacturing" which riders around the world valued.

"Increasing international production to alleviate the EU tariff burden is not the company's preference, but represents the only sustainable option to make its motorcycles accessible to customers in the EU and maintain a viable business in Europe. Europe is a critical market for Harley-Davidson."

The company said ramping up production at non-US plants, which are located in India, Brazil and Thailand, would require additional investment and take at least nine to 18 months to complete. It also said it hoped to limit the cost from higher EU tariffs to between $30 million to $45 million in the meantime.

Harley-Davidson is the first American manufacturer to detail the financial impact of the escalating trade tensions between Washington and its allies. Its announcement comes hard on the heels of an earnings warning by German carmaker Daimler last week.

Daimler, which also produces its premium Mercedes cars in the US, said its 2018 profits were expected to be hit by higher Chinese tariffs on imports of American-made cars.

Brussels versus Washington: EU tariffs on US goods go into effect