EU's retaliatory tariffs on US products come into effect

The EU has officially imposed tariffs on US jeans, motorbikes, bourbon and other items in response to a similar move from the US. The measures have some experts worried the world could be heading toward a trade war. 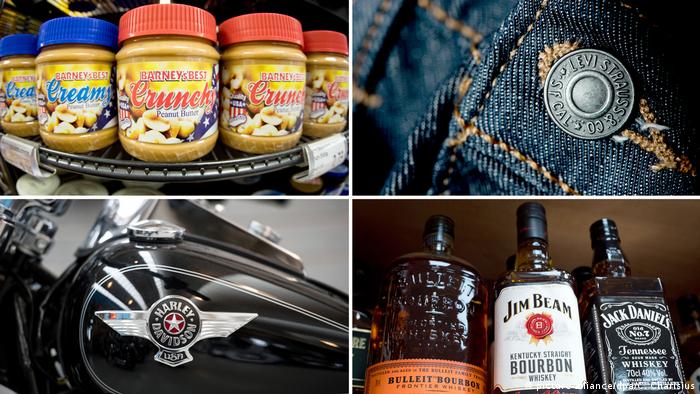 European Union retaliatory tariffs on US goods came into force on Friday, in response to US tariffs on steel and aluminum.

The EU said it has no choice after failing to secure an exemption to US President Donald Trump's tariffs, but the response has raised fears of a global trade war.

What the EU is targeting

The tariffs target $3.4 billion (€2.9 billion) worth of American imports including:

European Commission President Jean-Claude Juncker said on Thursday the US tariff decision "goes against all logic and history." "Our response must be clear but measured. We will do what we have to do to rebalance and safeguard."

European Commission Vice President for Trade Jyrki Katainen said: "If we chose products like Harley Davidson, peanut butter and bourbon, it's because there are alternatives on the market. We don't want to do anything that would harm consumers. What's more, these products will have a strong symbolic political impact."

EU Trade Commissioner Cecilia Malmstrom said: "We are always open to talk with the US. The whole EU is based on the idea that we talk." She described the tariffs as "illegal" as they contravened World Trade Organization (WTO) rules.

"We have a trade war — and it's an escalating trade war," SEB chief economist Robert Bergqvist told AFP news agency. "All these kind of things going on right now could trigger that kind of behavior and initiate a correction in the stock markets, and that could also trigger a slowdown in the global economy."

Opening salvo of trade war: The tariffs will likely do little to quell Trump's aggressive policies on trade as he attempts to reduce perceived imbalances. On Friday, Trump threatened to impose a 20 percent tariff on EU cars, and slammed the EU's "Tariffs and Trade Barriers long placed on the US" in a Twitter post. The car tariffs would place hefty economic pressure on EU stalwart Germany.

Why these goods? The goods represent an almost caricatured depiction of the United States, but they are also targeted to inflict maximum political pain in regions of the US that voted for Trump as well as lighting a fire under the Democrats who have so far been unable to reign in the Republican trade moves.

The other fronts: The EU is just one bloc retaliating to US trade aggression. In two weeks, the US will impose tariffs on $34 billion of Chinese goods and Beijing has vowed reciprocal tariffs on soybeans and other farm products. India and Turkey have already targeted US products ranging from rice to autos to sunscreen.