Despite the threat of a trade war between the EU and US, goods slapped with tariffs only make up a small percentage of total trade between the two sides. DW looks at the US's trading relationship with the EU and Germany. 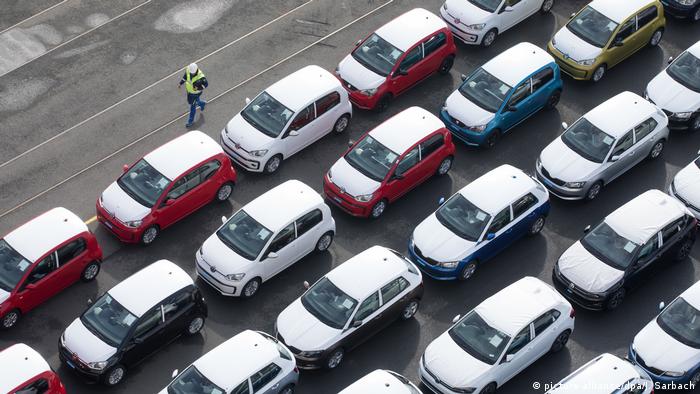 Despite fears that the latest tariffs imposed by the US and the EU respectively on some goods could escalate into an all-out trade war, Europe's and the US's trading relationship remains strong.

The US is by some distance the bloc's top destination for goods and services. In 2017, it took in 20 percent of all exported EU goods, totaling around €376 billion ($435 billion), while exporting some €256 billion worth of goods the other way, according to Eurostat, the European Commission's statistical unit.

EU exports to the US were also almost twice as high as those going to China, the bloc's second largest trade partner.

When it comes to services, trade amounted to another €440 billion in 2018, with the US enjoying a slight surplus.

Trade between the two sides is dominated by manufactured goods and components. The bulk of exported European goods to the US is made up of:

The US exports similar — albeit fewer — goods into the EU. However, it boasts a significant advantage over the bloc when it comes to exporting motor engines and aircraft equipment, which last year amounted to roughly €28 billion and €25 billion respectively.

However, Europe has long enjoyed a substantial trade surplus with the USwhen it comes to goods overall, which peaked in 2015 at €122 billion and last year stood at €120 billion.

That surplus, however, is offset by the US's slightly stronger hand in exporting services. According to Eurostat, the EU in 2016 imported €219 billion of American services, while €218 billion worth of services went the other way, marking Europe's first services deficit with the US in five years.

The US's chief service imports to the bloc, meanwhile, were:

By adding services and "primary income" — like certain financial transactions such as interest payments — to the total value of trade between the two sides, the US actually comes out with a €14 billion surplus over the EU.

German trade with the US

Out of all the EU member states, Germany is by far the US's largest trading partner within the bloc when it comes to goods. In fact, with total exports last year reaching €112 billion, Germany accounted for almost 30 percent of all EU exports going to the US.

At almost €40 billion, transport-related goods made up 30 percent of all US imports, with the vast majority being vehicles. In fact, the US remains Germany's largest single export market for cars.

Various types of machinery accounted for just over €30 billion in German exports, while packaged medicine alone was worth some €10 billion.

It means Germany has a trade surplus of €66 billion with the US.

Nevertheless, Germany is still the US's second largest European market, importing €46 billion worth of US goods last year, behind the United Kingdom (€54 billion) but far ahead of France (€29 billion).

From the US side, cars remain the mostly commonly exported good, accounting for 12 percent (€6 billion).

That's followed by turbo-jet and propeller engines, which together account for just under 8 percent, while packaged medicines make up 6 percent.

Germany also on top of services

According to the US Bureau of Economic Analysis, Germany also enjoyed a trade surplus in services, excluding "primary income," with the US last year.

If you live in Germany, you might occasionally get the impression that the car industry in the country is embattled and under siege. Yet more German cars sell around the world than from any other country. Why? (21.06.2018)