The threat of steeper US tariffs on EU-assembled vehicles could lead to a global trade war. German automakers, which produce more vehicles in the US than they export there, are in the Trump administration's crosshairs. 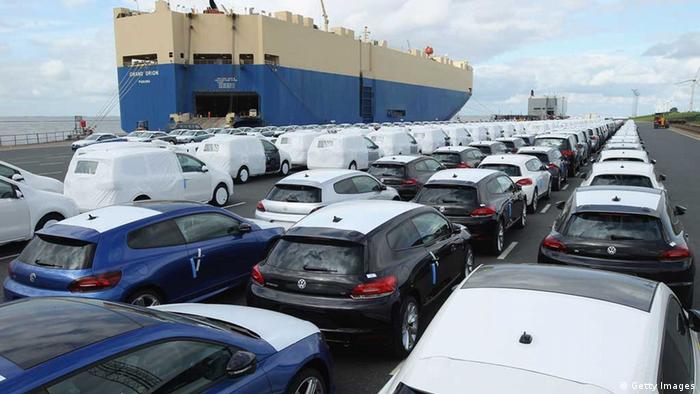 US President Donald Trump on Friday threatened to impose a 20 percent tariff on US imports of vehicles assembled in the European Union, in a move that would hit German automakers hard.

Trump threatened to escalate a trade war after the EU on Friday imposed retaliatory tariffs worth €2.8 billion ($3.26 billion) in response US tariffs of 25 percent on steel and 10 percent on aluminum imports.

"Based on the Tariffs and Trade Barriers long placed on the U.S. and its great companies and workers by the European Union, if these Tariffs and Barriers are not soon broken down and removed, we will be placing a 20% Tariff on all of their cars coming into the US," Trump tweeted. "Build them here!"

Last month, the Trump administration launched an investigation into whether the import of vehicles and automotive parts pose a national security threat. The investigation is expected to be finished in late July or August.

The US president has long attacked Germany's auto industry, saying that they are flooding the US market with automobiles and contributing to trade imbalances.

At a rally in Minnesota on Wednesday, he claimed that the EU had imposed barriers against US carmakers, "Yet they sell Mercedes and BMW, and the cars come in by the millions, and we hardly tax them at all. They don't take our cars. And, if they do, the tax is massive."

The US imposes a tariff of 2.5 percent on EU-assembled cars and a 25 percent levy on trucks. The EU imposes a 10 percent tariff on imports of US cars.

Brussels versus Washington: EU tariffs on US goods go into effect

German automakers Volkswagen, Daimler and BMW all have assembly plants in the United States to produce for the domestic market as well as for export.

The French automaker of Peugeot and Citroen cars, PSA, and Renault don't ship any cars for sale in the US. Italy's Fiat Chrysler has auto parts and assembly plants in the United States and Mexico.

German auto manufacturers sold 1.35 millon vehicles in the United States in 2017, accounting for 7.9 percent of the US market, according to Germany's VDA automobile industry association.

According to VDA data, 493,643 cars were exported from Germany to the United States.

Read more: US trade with the EU, Germany in numbers

The VDA did not respond to Trump's latest threat, but earlier in the week it warned in a statement against taking measures against World Trade Organization rules.

The Auto Alliance, a trade group of automobile manufacturers that represents 70 percent of US car and light truck sales, said, "Tariffs are not the right approach."

"Tariffs raise vehicle prices for our customers, limit consumer choice and invite retaliatory action by our trading partners. Automakers support reducing trade barriers across the board and achieving fairness through facilitating rather than inhibiting trade,” Auto Alliance said in a statement Friday.

Trump's announcement on automobile tariffs added fuel to anxiety-gripped markets, as the US and China are poised to escalate a trade war.

"The US-EU trade dispute, when viewed alongside the US-China trade tensions, means that we are edging closer to a full-blown global trade war," John Ferguson, the head of global forecasting at the Economist Intelligence Unit, told the AFP news agency.

"The concern here is how Mr. Trump responds — he may look to enact further tariffs, or even subsidize US farmers who are likely to feel the brunt of the tariffs from US trading partners," he said. "Both of these moves from Mr. Trump would likely lead to a further response from the EU, and this is how a trade war breaks out."

US President Donald Trump has threatened new tariffs on Chinese imports, raising fears of an escalating trade war. Trump threatened further sanctions should China — which accuses the US of "blackmail" — retaliate. (19.06.2018)