At a finance ministers' summit, the group issued a statement calling for dialogue over economy-killing trade disputes. The US reportedly tried to woo the EU and Japan for leverage over China. 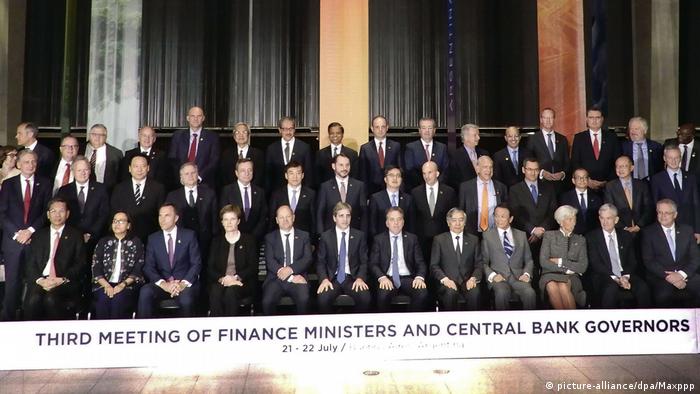 The G20 finance ministers issued a warning on Sunday that "heightened trade and geopolitical tensions" were serious risks to global prosperity. The group of finance chiefs and central bankers from around the world published the communique at the end of a two-day summit in Buenos Aires, Argentina.

They emphasized "the need to step up dialogue and actions to mitigate risks and enhance confidence."

Although the statement did not mention the United States by name, the escalating conflict between it and China, the world's two largest economies, has resulted in $34 billion worth of tariffs on each other's goods.

On Friday, US President Donald Trump threatened to impose even more tariffs if Beijing does not agree to major changes in certain policies such as those for joint ventures – it is notoriously difficult for foreign companies and investors to gain a foothold in China.

US tries to woo EU, Japan with free trade offers

US Treasury Secretary Steve Mnuchin said that he did not have substantive talks with his Chinese counterpart at the meeting. He added that if China wanted to "negotiate meaningful changes," he was available.

The US has angered not only China but its allies in Europe by imposing tariffs on steel and aluminum. Trump has said he is also considering adding a new tariff on automotive parts, which would hit the EU and Japan particularly hard.

In retaliation, Europe has placed tariffs on US goods such as blue jeans, motorcycles and bourbon.

Canada's Finance Minister Bill Morneau said that Mnuchin had expressed a desire throughout the meeting to "drop all tariffs, nontariff barriers and subsidies." Morneau cautioned, however, that such a feat, while an "aspirational target," might be difficult to pull off in real life.

Mnuchin reportedly used the meeting to try and smooth tensions with the EU and Japan by offering free trade deals, hoping to get leverage over China.

The World Trade Organization has pointed to a stark increase in trade restrictions initiated by G20 nations. It warned that protectionism was unsuitable to support the recovery of a post-crisis global economy. (04.07.2018)