Is Donald Trump capable of learning? Surprisingly, the G20 sends a signal of unity in the fight against protectionism. But there are several sticking points. Henrik Böhme takes stock in Hamburg. 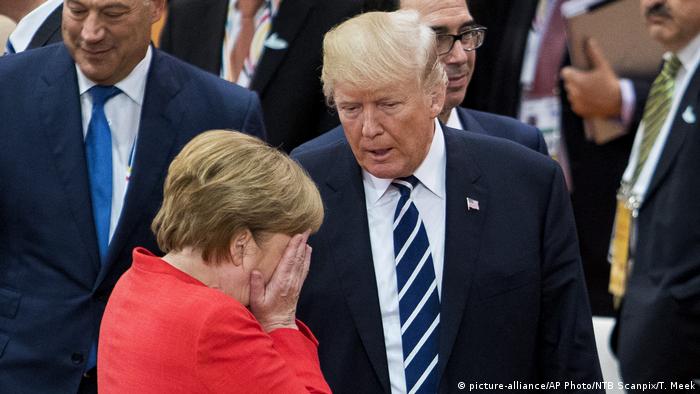 How can you manage to make a summit which costs millions upon millions a success? First, you lower all expectations as far as they can go. Then you gently assert pressure on your guests, appealing to their sense of compromise. On the first day you openly admit that you are far from a compromise on important topics such as free trade. And then early on the morning of the closing day you let the news leak: Agreement On Trade! A clear commitment against protectionism in the final declaration. Not 19 against one, but all 20 together. Wow! Everything will be fine.

What has been a consensus for years is now celebrated as a breakthrough in the days of a President Trump. And even for this the negotiators had to wrestle day and night. These G20 meetings have been held since 2008 at the level of heads of state and government. Since then, the commitment to free trade has always been in the communiqués. One the one hand, these papers are a proof of work done, and on the other hand, homework.

But as in real life not everyone likes to do their homework.

In the case of free trade this is easy to see since the World Trade Organization (WTO) maintains precise statistics on trade barriers that are being erected or taken down. And lo and behold, each month an average of 17 new measures restricting trade are adopted in the G20 countries - mainly for industrial goods. This is what the contradiction between reality and a promise in a G20 paper looks like.

Trump got what he wanted

Therefore, it would not have been very difficult for the Americans to agree to the passage. Now they don't have to sit in the corner as the "bad guys," but can continue with their "America first" policy. As long as the WTO only counts trade barriers and doesn't undertake any concrete measures against them - so what! In addition there is also a second sentence in the final declaration which explicitly permits the use of "legitimate trade defence instruments," for example - you guessed it: punitive trade tariffs.

A critique of globalization is that it's an abstract concept promoted by an elite club to benefit a minority to the detriment of the majority. But, Rob Mudge asks in Hamburg, how do you help those who feel left behind? (08.07.2017)

"Living without globalization?" That was the topic of a meeting of leading economists and politicians in the run-up to the G20 summit. The jury is out on this question, as Manuela Kasper-Claridge found out in Hamburg. (04.07.2017)

Merkel's G20 in Hamburg proves an exercise in excess

The G20 summit is over, but the ramifications of the scenes on the streets are likely to reverberate for some time to come. Rob Mudge gives his take on an extraordinary experience. (08.07.2017)

Officials are wary of voter dissatisfaction, as illustrated by the recent Brexit vote and rise of Donald Trump. US Treasury Secretary Jack Lew urged his colleagues to use all available policy tools to boost efficiency. (23.07.2016)

DW provides a wrap-up of international media commentary on the Hamburg G20 summit. A common theme was a lack of trust in Donald Trump and a decline in US influence. (08.07.2017)

Donald Trump has always been a big promoter of his daughter Ivanka. At the G20 summit in Hamburg she even got to play president for a while. DW's Bernd Riegert found that utterly unacceptable. (08.07.2017)

And as if these were not enough concessions to keep the man from Washington happy, fair conditions in trade relations will be demanded. Ah, you see, Donald Trump probably thought to himself. That's exactly what I've always talked about - FAIR trade. I put up a tough demeanor, for example with punitive duties on steel imports, and the others are already jumping!

Even the problem of overcapacity in global steel production made it into the final declaration. As if this was the biggest problem in the world. Far from it.

Where is the just and equitable globalization?

Two decades ago it was Paul Martin, the former prime minister of Canada and a founding member of the G20, who said that globalization must benefit everyone. It's a nice idea, but one that no one took very seriously.

Now that a critic of globalization has moved into the White House, and the British voted for Brexit, mainly because of fears of globalization, some people are starting to remember this prudent phrase. For it is precisely this core mission - to make globalization fair - that the G20 should stand for.

This is what the Germans realized during their presidency of the G20. The chancellor pointed this out more than once during the deliberations in Hamburg, and it is also reflected in the first headline in the 15-page final leaders' declaration:

"Sharing the Benefits of Globalisation"

But this must not be allowed to remain a hollow phrase. Social inequality splits societies. The disappointed, those left behind and the discontented are food for extremists of all kinds. Unjust globalization is a threat to democracy.

Leaders of G20 nations endorsed a landmark deal to establish a global minimum tax rate. They were, however, at odds on issues like coronavirus vaccines and fighting climate change.